After blasting its roadster into space, Tesla's Facebook chatter jumped 550%

To the moon, Elon! How to generate buzz in the era of private space flight

If you’re a car company, there are lots of ways to generate buzz about your product. If you’re Jeep, you can pay for a starring role for a wrangler outrunning a T-Rex. Or if you’re Dodge, you can invoke the memory of Martin Luther King with a meandering Super Bowl spot (not all buzz is good buzz). These approaches may have worked in the vacuum-tube days of the Apollo program, but according to Thinknum data they have little effect on digital buzz. We’re living in the future, and in order to survive, brands need the right stuff. As Elon Musk demonstrated last week, if you want to get people talking, you have to blast your product into space.

As Elon Musk demonstrated last week, if you want to get people talking, you have to blast your product into space.

Here at Thinknum we were curious about how effective a marketing ploy last week’s historic Falcon Heavy launch was for Tesla Motors, whose 2011 roadster is now making its way into interplanetary space. Our social media feeds were ablaze with launch videos and live feeds of Starman in a car, in space, seemingly rolling along on a Sunday drive with the top down. 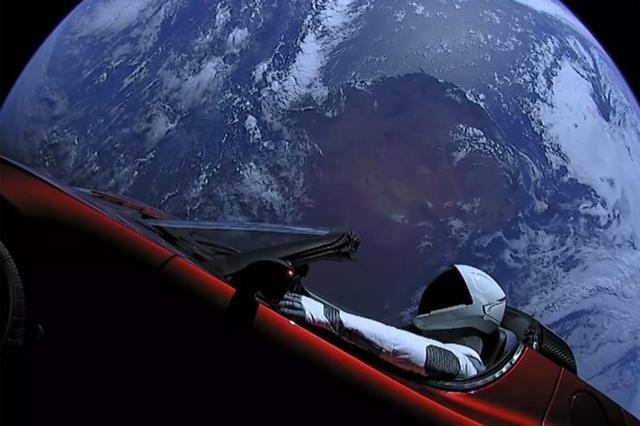 But was this representative of an actual increase in buzz, or are facebook algorithms creepily cognizant of our geeky fascination with space?

According to Thinknum’s data, the daily number of people talking about Tesla Motors on Facebook rocketed from a pre-launch baseline of 17,500 to 113,163, an increase of almost 550%. What’s more, this buzz held strong for an entire week, and only began to tail off yesterday. Only a new electric truck announcement has rivaled the uptick in Facebook interest from last week’s launch.

Contrast this with traditional forms of advertising: Say, a spot during the Super Bowl. Dodge chatter on Facebook was muted, growing from a game-day 81,891 mentions to 91,147 four days later, which works out to an 11% return in buzz from an estimated $10 million investment (not including production cost).

Because innovative, reuseable launch systems such as SpaceX’s Falcon Heavy have cut payload launch costs to a relatively budget-oriented $640 per pound (the Space Shuttle, by comparison, cost nearly $10,000 per pound placed in orbit), the payload launch cost to send Musk’s Tesla into space works out to just over $1 million all-in (depending on the actual launch weight of the Tesla - as Motor Trend reported last week, SpaceX removed the automotive glass, batteries and drivetrain from the Roadster, shaving at least 1000lbs from the car’s payload weight; despite several attempts, SpaceX has not responded to requests for comment and to confirm the roadster’s actual weight at launch).

This was no gimmick, as former NASA deputy administrator Lori Garvey suggested. Not at all. If the point of PR and advertising investments is to generate buzz, Elon Musk has shown us that the cheapest, most effective ROI is simply to blast your product into space.

Does this herald a Blade-Runner-like future of sponsor-subsidized launch systems with corporate-logo-plastered rockets blazing overhead like orbital Goodyear Blimps?

“I think it’s coming,” said Kevin Cook, Vice President of Marketing for the Space Foundation, who spoke to us about our findings. “Whether we’ll see commercials for Fritos on the side of spacecraft, that’s probably down the road, but if that model works, why not let it work in the marketplace?”

And there have actually been some instances of space advertising throughout history. In 2001, for instance, Pizza Hut “delivered” a vacuum-sealed pizza on a Russian rocket to the International Space Station. Way back in 1993 a company proposed placing a giant (1-square-km) billboard in low-Earth-orbit. The project, unimaginatively titled “Space Billboard,” would have been, you guessed it, visible from Earth, and it prompted a UN resolution voluntarily banning obtrusive advertising in space (plastering a rocket and spacesuits with logos like an interstellar Formula 1 team is fair game).

The advertising industry is taking notice. Last year, a study by agency Sparks & Honey found that 36 percent of Americans are more likely to buy a product if it was inspired or created by technology developed for outer space exploration. On the surface, this is nothing new: Tang is disgusting*, but the Apollo program rocketed its popularity to, ahem, lunar heights, and who doesn’t like Astronaut Ice Cream?

“While there already exists a long, celebrated history between space and consumer products — many of today's standard household items and technologies can trace their roots back to research that was originally conducted in support of the space program — price has, in the past, been the biggest barrier to entry,” Kellie Gerardi, aerospace and defense strategist with the Commercial Space Foundation, told Thinknum Media via email.

There's a long, celebrated history between space and consumer products — many of today's standard household items and technologies can trace their roots back to research in support of the space program — price has, in the past, been the biggest barrier to entry. For a long time the only organization that was big enough to put a rocket into space was NASA which, as a government agency, is prohibited from promoting or appearing to promote any commercial product or activity.

But commercial spaceflight is changing the game. Newer, private entries into the spaceflight business are not subject to the same restrictions, and Musk’s Tesla play may actually herald the dawn of an advertising space age — literally and figuratively.

“This is happening,” Gabrielle Rein, owner and creative director of Viceroy, a full-service creative agency that has worked closely with the Commercial Space Federation, told Thinknum Media. “I don’t see it as being a race-car-like future; I don’t see patches on astronaut space suits. I think it’s going to be smarter and more nuanced than simply branding something. One of the reasons Falcon Heavy was so inspirational was because it was an experience.”

And there is more to come. “Very soon, with the next year, you are going to see these things are going to start happening,” says Rein. “Falcon Heavy is the tip of the iceberg. Commercial space is coming.”