The ambitious, bold and hungry start their week with The Business of Business!
Markets
4.16.19   2:28 PM Markets

Yum Brands China delivered a 77% increase in operating profit from FY 2017 to 2018 and has over 9,000 restaurants in a growing market. Here is its alternative data profile.

In the shadow of the U.S.-China trade negotiations, Yum Brands China continues to have phenomenal growth and is one of the largest restaurant companies mainland.

While also looking at the company's fiscal profile and history, here is what new alternative data has to say about Yum Brands China:

Founded on May 30, 1997, Yum! Brands ($YUM) formed as Tricon Global Restaurants, Inc., a subsidiary of the multinational food and beverage company Pepsico ($PEP) that held Pizza Hut, Taco Bell, and Kentucky Fried Chicken. After being spun out of PepsiCo a few months later, it collaborated with, and eventually acquired, Yorkshire Global Restaurants, owner of the A&W and Long John Silver chains, later rebranding itself as Yum! Brands when the acqusition completed in 2002.

Two years later, Yum! Brands experimented with a cafeteria-style restaurant called East Dawning in Shanghai, China. This would be the company's first step towards a near decade-and-a-half period of expansion into the Chinese market, finding massive success with KFC and acquiring hot-pot chain Little Sheep.

On October 20, 2015, Yum! Brands decided spun-off its holdings in China to form a separate, publicly traded company called Yum Brands China, creating the YUMC stock as we know it today.

[The "too long, didn't read" version of this story is that Yum Brands China is a spin-off of a spin-off, which is basically the business version of Inception.]

With over 9,000 individual locations, Yum Brands China has one of the largest restaurant portfolios in the world's most-populated country.

Broken down by restaurant type, there are triple the number of KFC locations than Pizza Hut locations in China. There are also just under 300 Little Sheep locations, which partially makes sense as hot pot is fundamentally different from how a fast food store operates. 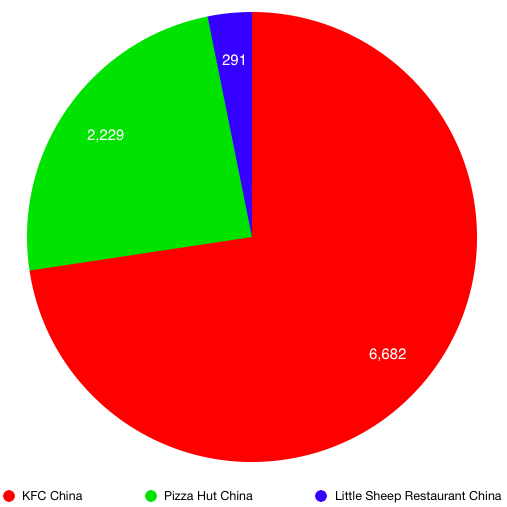 By city, Yum Brands China has at least one restaurant in 644 cities according to the data on its website. As an established restaurant powerhouse, it has locations in all Chinese city tiers, with an emphasis on the Tier One and New Tier One cities.

Despite its impressive footprint in China, Yum Brands China is somwhat stale on popular social media website Weibo, according to its metrics.

For example, the Weibo profile for Little Sheep is stuck around 1.01 million followers. While having over a million followers is objectively good, a lack of growth over the past 18 months is a bit concerning.

Although the Yum Brands! we know in the states isn't the same one as the one in China, it is still a solid brand in an emerging market, even amid the fog of U.S.-China trade talks.

As always with new datasets, we'll continue to monitor Yum Brands China through its first quarter earnings call and beyond.

A single Amazon job listing helped push Bitcoin back above $35,000

Colony Capital founder Tom Barrack was an advisor to Trump and, perhaps, a mole for a foreign government.
Christie Smythe
7.22.21   12:33 PM
People
View All