The ambitious, bold and hungry start their week with The Business of Business!
2.4.21   1:00 PM People - Profiles

AI therapy, "doesn't have a bad day," according to Evers. Here's how a chatbot could help address our growing mental health crisis.

It’s no secret that the state of mental health across the country is worse than ever, mainly due to the effects of the pandemic. As more and more people search for access to therapy, a new class of startups has grown in popularity: AI therapy platforms.

One of those platforms, Woebot Health, created an AI chatbot that listens to users and guides them through clinically validated treatment. Woebot’s current CEO, Michael Evers, never even worked out of the company’s San Francisco offices — he started right after the pandemic hit. Despite that, he saw something special in the startup.

“That was the first thing that was interesting to me when I first got exposed to Woebot, the product works,” Evers said. “There's a huge unmet need in the mental health space and access for individuals. And so Woebot offered the potential to address a genuine unmet need, as well as build a very material profitable business.”

Before joining Woebot, Evers was the CEO of the Learning Corp, a digital therapeutics company that made its own therapy app. Evers was drawn to Woebot in part because of the tech, but also because of Alison Darcy, Woebot’s founder and president. A psychologist herself, Darcy founded the company in 2017 to bring therapy to the masses.

“Alison built and designed Woebot from that dual perspective of everything she learned as a clinician, what was working as effectively, and with what she saw the users needed,” Evers said. “And you see that when you utilize the product. I don't know how many relational agents you’ve used before, but Woebot is a thoughtful robot.”

Woebot’s chabot doesn’t use a one-size-fits-all approach — the more you communicate with it, via instant messaging, the more it learns about you and adjusts treatment accordingly. Woebot uses cognitive behavioral therapy, a method that challenges cognitive distortions and behavior in order to improve coping mechanisms and emotional regulation. While building the bot, Darcy found that the treatment leant itself well to machine learning.

“If you were truly somebody who's dealing with a mental illness, it's not on a 9 to 5 cadence. It's episodic, and it happens when it happens.” - Evers

Many psychologists have argued that AI therapy, or therapy apps more broadly, aren’t suitable replacements for mental health professionals, especially for serious mental illness. However, Woebot doesn’t claim to be a replacement for a human therapist, but rather a tool for those who need it. And according to Evers, users really do feel a connection with the bot, despite knowing there’s no human interaction involved.

“Woebot is nonjudgmental,” Evers said. “Woebot delivers the same level and the same character. He doesn't have a bad day. So it's this very kind of safe space. I think a lot of other data has been published to show that humans in general, it is not uncommon for us to be more willing to be transparent with somebody other than a human.” 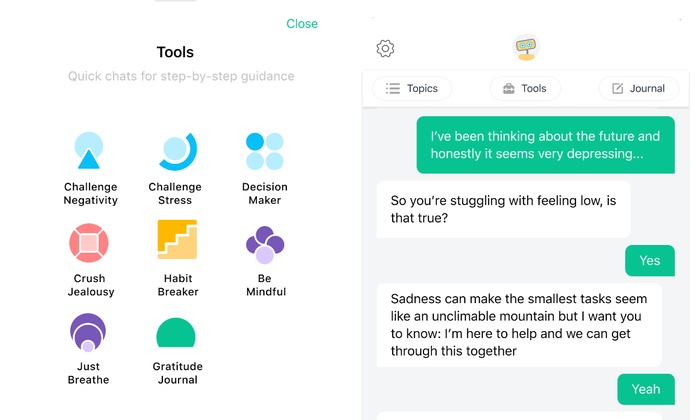 Evers has seen Woebot’s effects firsthand — his youngest daughter has found the app’s availability ideal. Unlike some therapists, Woebot is available day or night, something many other users have found helpful, from mothers experiencing postpartum depression to veterans experiencing post-traumatic stress disorder. “If you were truly somebody who's dealing with a mental illness, it's not on a 9 to 5 cadence,” Evers added. “It's episodic, and it happens when it happens.”

“Woebot has the real potential to be providing access and care to a huge section of the mental health need.” - Evers

While the pandemic rages on, mental health has been pushed to the forefront. “The World Health Organization had said about 10 years ago that they expected that depression and mental health related illness would be the leading underlying cause of severe illness and death 20 years from now,” Evers added. “And that's happened 10 years earlier on a global scale. You're stigmatized or you are depressed to a point where you can't cognitively rationalize that you actually need to seek it.”

Luckily, more and more people are seeking help. According to the American Psychological Association, nearly half of households have had someone seek mental health treatment in 2020. “The average person doesn't seek or find care for almost 11 years into their state of mental illness and depression,” Evers said.

As a result, Woebot has seen consistent growth. Since last March, the company has seen a steady increase in users, reaching over a million as of December 2020, and Woebot exchanges 4.7 million messages with people a week. Evers expects continued growth even as the pandemic draws to an eventual close. In the meantime, the company is awaiting FDA approval for its newer treatment programs.

“Woebot has the real potential to be providing access and care to a huge section of the mental health need both in the US and on a global basis, and doing it in a scalable way that's just not being done at other organizations and other places,” Evers said. “So I think there's enormous potential for us.”