The ambitious, bold and hungry start their week with The Business of Business!
Markets
1.11.19   9:07 PM Markets

Whole Foods wants stores in populated areas where people have discretionary income thanks to jobs that require at least a bachelor's degree. So we uncovered the most-likely places where Whole Foods could turn an ex Sears or Kmart into a new market.

Whole Foods currently outpaces Trader Joe's ($PRIVATE:TRADERJOES) in terms of stores with 516 locations, but is losing to the likes of ALDI ($PRIVATE:PRIV_ALDI) and traditional supermarket giants such as Ahold Delhaize ($DEG).

Technically, Whole Foods could just dig deep into Amazon's pockets and buy out every plot of land that had a Sears and Kmart on it and quintuple its number of stores. Our database saw 2,602 Sears and Kmart locations close in the United States since we started tracking their store locations.

But realistically, Amazon wouldn't do that.

One of the biggest reasons why it wouldn't would be because of the demographics it is targeting, which it just-so-happens to lay out on its Real Estate page. 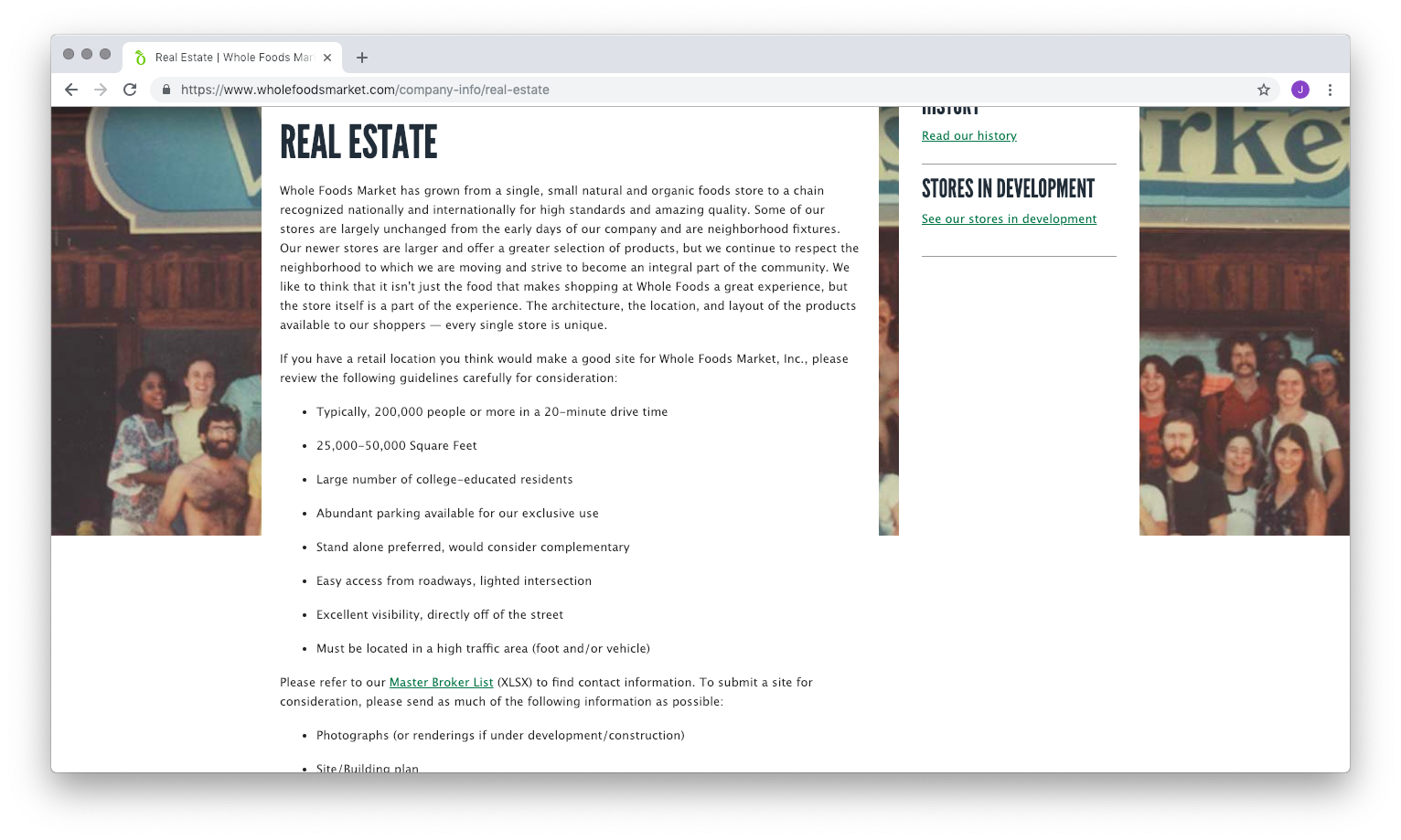 Essentially, Amazon wants to place stores in areas where there are plenty of people who have the money and are willing to spend $6 on asparagus water... If it still carried that product (that burn is brought to you by the year 2016).

All jokes aside, Whole Foods wants stores in populated areas where people have discretionary income thanks to jobs that require at least a bachelor's degree. So we uncovered the most-likely places where Whole Foods could turn an ex Sears or Kmart into a new market.

Whole Foods and Sears have two widely different strategies when it comes to figuring out where to settle, as seen through the average income by Core-Based Statistical Area of closed Sears and open Whole Foods.

Unsurprisingly, the average Whole Foods sits in areas where the median income for households is more than double that of the 2016 national average. Sears, meanwhile, has several locations in lower income areas, such as in the Midwest and rural markets, which drive down its average.

From here, we can narrow down where Whole Foods might set up shop by only plotting closed Sears and Kmart locations around or above the Whole Foods median income average, as well as all those who are at least in the ballpark of the minimum median income. 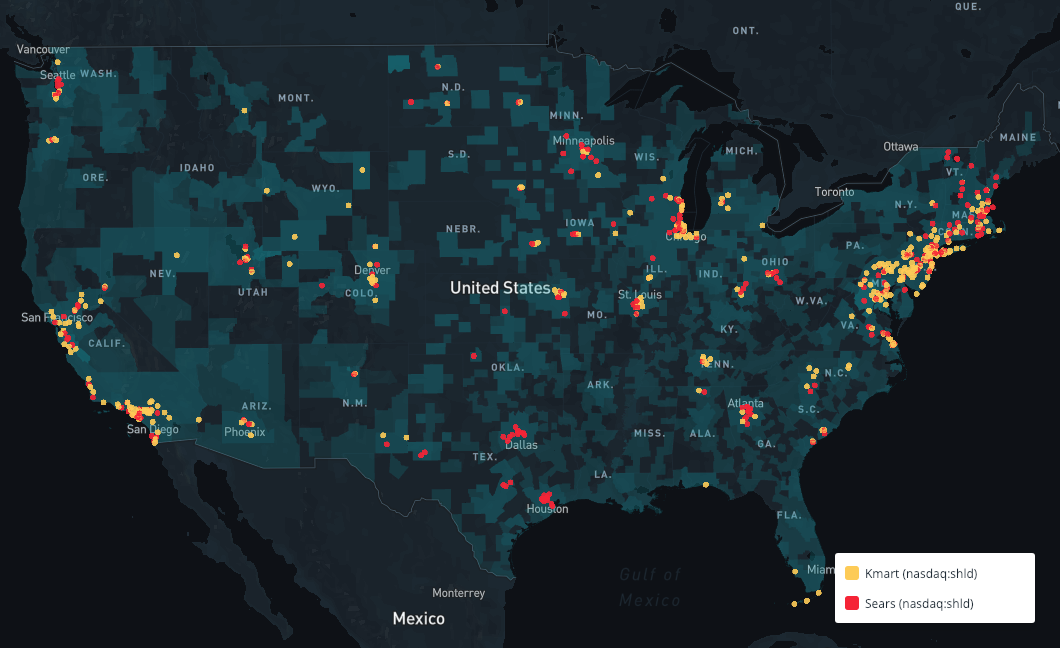 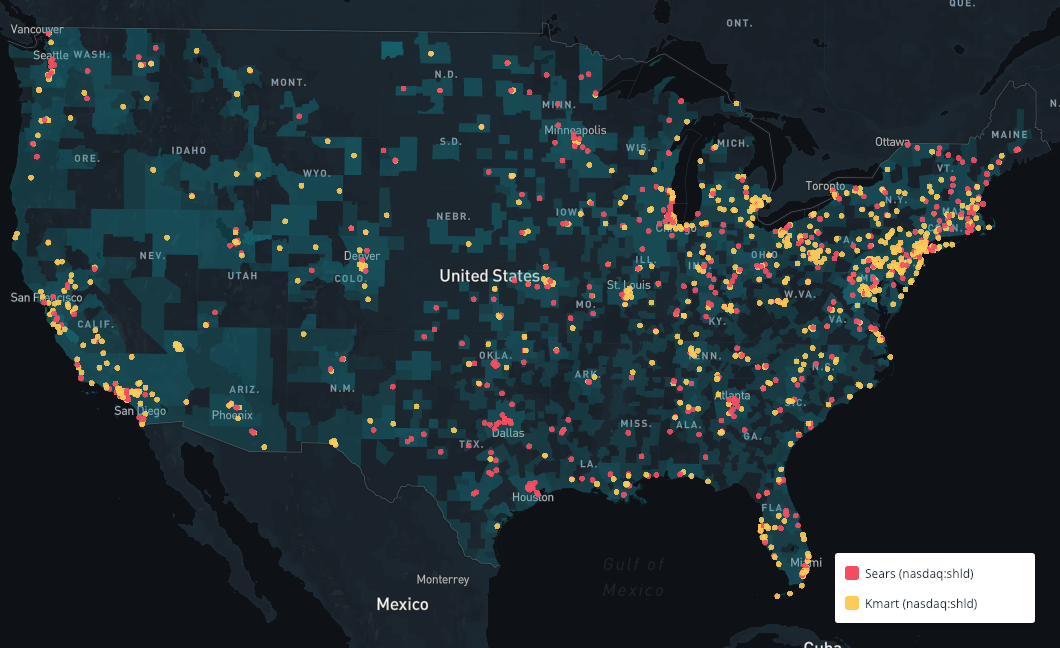 (There area also some locations in Alaska and Hawaii too)

But what about square footage?

The square footage specifications do throw a small wrench into what former Sears and Kmart stores it would consider, as the average Sears or Kmart takes up about 68,000 square feet of space. But then again, Amazon could just sublet space to other tenants, break up their store to allow more tenants to rent directly, or just open up a megastore.

We start with a blockchain analytics firm co-founder making a bold prediction about investment returns, while acknowledging that he has “no credentials except my profile pic is a penguin.”
Christie Smythe
11.26.21   10:30 PM
People

We examined data from CarMax to examine pricing trends for popular makes across the U.S., including for gas-powered cars and EVs.
Albion Krasniqi
11.26.21   5:34 PM
Markets

The biggest names in the DAO movement — from a16z to Mark Cuban, Peter Thiel and Chamath

We took a close look at the growing number of decentralized blockchain-based vehicles. We came up with a list of 50 DAOs, and looked at some entities that support the ecosystem. Here are some of the most recognizable names we found.
Othmane Zizi
11.23.21   11:24 PM
Tech

Here is a map of the top-rated marijuana dispensaries around the country, based on data from Weedmaps collected by Thinknum.
Jael Goldfine
11.23.21   4:13 PM
Markets

You may have noticed other DAO and crypto-related Twitter accounts using similar notation. It’s not a coincidence.
Joon Ian Wong
11.22.21   8:35 PM
Features

Married uBiome co-CEOs Jessica Richman and Zachary Apte were hit with a 47-count indictment and a lawsuit by the SEC.
Christie Smythe
3.19.21   6:37 PM
Outcasts
View All