The ambitious, bold and hungry start their week with The Business of Business!
Markets
1.18.18   12:17 PM Markets

Natural disasters can be corporate excuses to price gouge. Not in the case of Public Storage, however. Here's the data to prove it.

Hurricane Harvey barreled into southeast Texas with 130 mile per hour winds — and then stayed — for days. In total, the monster storm dumped a massive 24.5 trillion gallons of rain on the area surrounding Houston, destroying thousands of homes and businesses. But people came together in the recovery, and Thinknum’s data — when it comes to self-storage prices — provides a fascinating data point in this remarkable story.

Amongst the hardest hit by the hurricane were self-storage facilities like those owned by Public Storage. The company had 116 properties across the region, with 8.5-million square feet of storage in 79,500 units, nearly all of which were closed for days during the initial recovery period.

By September 10, the company announced that it was safe for people to come back and access their belongings – and even open new lockers. In the wake of the storm, that was some folks’ biggest concern: A safe place to store whatever had not been destroyed until they could rebuild their lives. And with Hurricane Irma barreling through just a few days later, safe harbor was potentially at a premium.

But rather than exploit an oppourtunity to price gouge, Public Storage instead did something amazing: they discounted their facilities deeper than they had in a long, long time.

"Before the storm, there just wasn't that much product on the shelf to begin with," said Aaron Swerdlin, a self-storage specialist with commercial real estate firm Newmark Knight..

"Every single facility we're testing or shopping had a pretty significant hurricane special, which is kind of remarkable when they didn't have that much space to rent in the first place," Swerdlin told the Houston Chronicle.

Check out the chart – where you might have expected discounts would dry up, instead they doubled down after the storm.

They weren’t alone. Extra Space storage offered similar deals, including a free first month and waved setup fees, as well as credits for time their facilities were closed. U-Haul offered a free month as well.

The biggest problem was finding room, especially after it became clear that not all of the facilities could be salvaged. In a press release, the company reported: “We anticipate that seven properties more severely impacted by Hurricane Harvey, covering approximately 500,000 net rentable square feet and 4,000 units, will be demolished and rebuilt to state-of the-art properties to withstand potential 500-year floods in the future.”

You can see those closed properties in the Thinknum data map below. 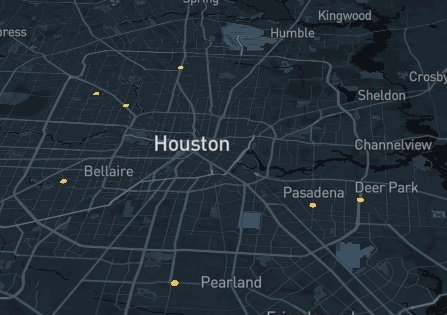 Moving fast, Public Storage opened more than 2000 units in the Dallas and Houston suburbs of Plano and Richmond by year's end. And they stuck by their determination to offer low rates to those hurt by Harvey: Rental prices at the Dallas-area Denton and Plano locations top the Thinknum charts for cheapest self-storage in the country. 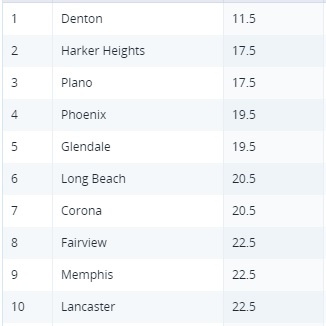 In the end, Harvey and Irma hurt the company, but not as badly as you might expect. As reported in CP Executive, Public Storage's losses totaled:

And yet, they managed to end their fiscal year beating analysts expectations... if just barely.