The ambitious, bold and hungry start their week with The Business of Business!
Markets
3.29.22   6:15 PM Markets

What’s dragging down Netflix — besides a disappointing Oscars night

Price hikes, outrage over crackdowns on password sharing, and strong competition from all sides are buffeting the streaming giant.

Sunday’s Academy Awards ceremony brought a moment Netflix has been eagerly awaiting for years: a movie released by a streaming service won Best Picture for the first time in history. Unfortunately for Netflix, despite spending hundreds of millions on original movies over the past few years in an attempt to nab Hollywood’s highest honor, Apple TV+’s CODA beat them to it.

To add insult to injury, Apple nabbed the rights to the Sundance favorite for only $25 million, and spent $10 million on its Oscars campaign. In the past three years, Netflix pushed for Best Picture with 2019’s The Irishman (estimated budget: $225 million), 2020’s Mank ($25 million), and 2021’s The Power of the Dog ($35-39 million), but while those films racked up 32 nominations between them, the streaming giant came away with only three wins.

Netflix has plenty to offer besides Oscar fare, of course, and its stock price has registered healthy gains since Sunday. But the streaming service seems to be headed for trouble in the current competitive environment, which sees Netflix pitted against a crowded market of streamers, such as Apple TV+, Hulu, Disney+, HBO Max, Amazon Prime Video, Peacock, Paramount+, Discovery+, and others. Here is why subscriber sentiment may be turning against the long-time king of streaming.

Watch out: your Netflix bill is going up again

Price hikes that are rolling out this month for existing subscribers will have them paying between $1-2 more a month, depending on their plan. Even Bernie Sanders is upset, and the Vermont Senator doesn’t strike me as a Bridgerton die-hard. 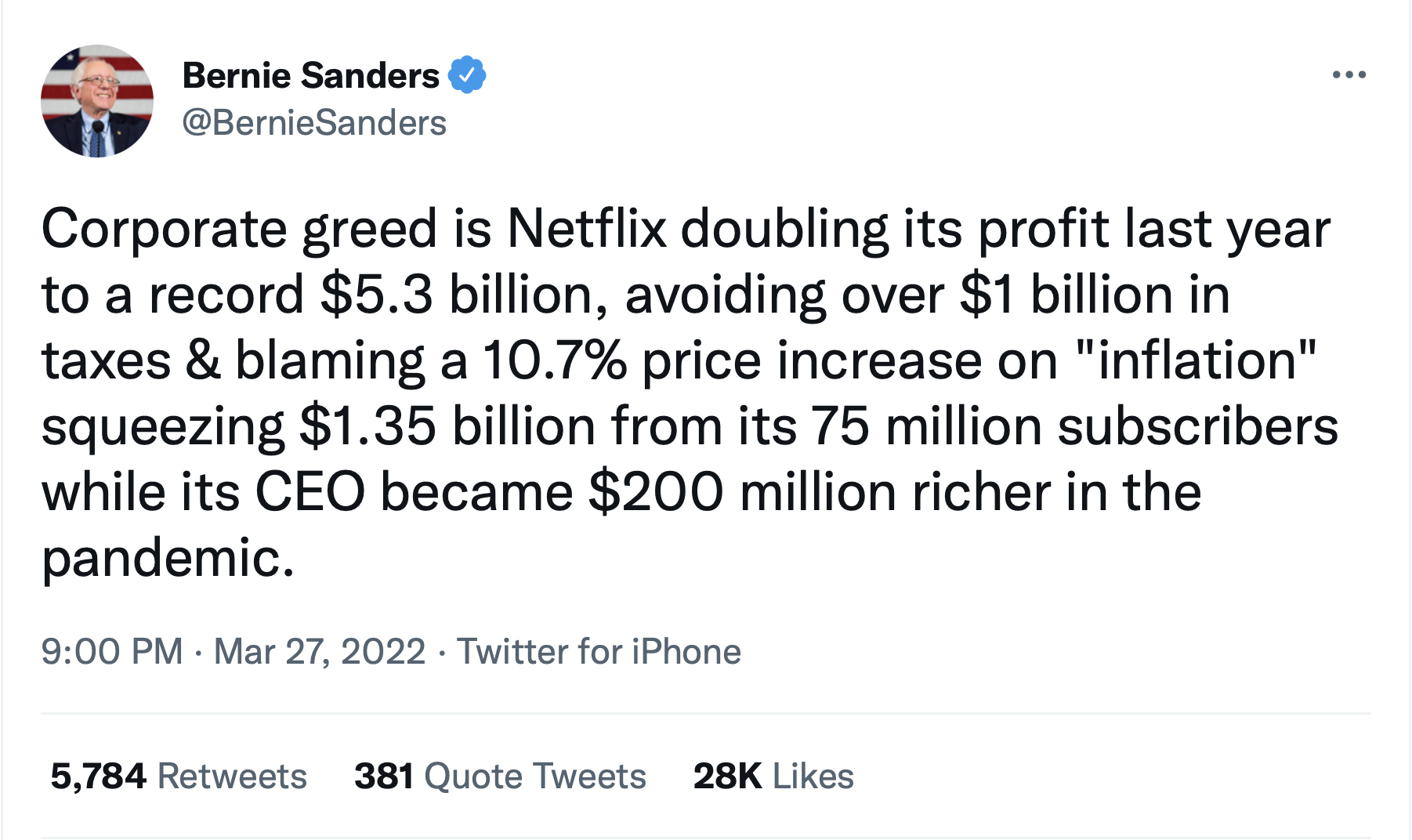 Netflix has long eschewed offering a cheaper, ad-supported plan, like those offered by Hulu, HBO Max, Discovery+, and Peacock; Disney+ is said to be exploring an ad-supported subscription as well. However, while the company claims it doesn’t have any current plans to introduce ads, its CFO stopped short of promising the service would stay ad-free, saying “Never say never.”

Newer entrants to the streamer market probably won’t lead to an exodus of Netflix subscribers, especially since their lower pricing seems strategically designed to augment a Netflix subscription rather than replace it. Apple TV+, for example, can’t compete with Netflix’s library of originals and licensed content. However, it offers its slate of movies and television for only $4.99, with six simultaneous streams and 4K quality included. Netflix acknowledges its competitors are cutting into its marginal growth, but remains optimistic that growth in international markets will make up for the losses.

“Love is sharing a password,” Netflix said on its Twitter account back in 2017. However, now the streaming service is breaking hearts, as it has launched a pilot program in South America to crack down on password-sharing.

Under the program, Netflix is levying a $2.99 surcharge on subscribers’ accounts in Chile, Costa Rica, and Peru, when passwords are shared with up to two people who don’t live in the same place as the main account holder. If you want to kick a freeloader off, they have the option of transferring their viewing history to a new account.

Netflix may not elect to expand this feature more widely, possibly saving college students across the U.S. from the threat of being kicked off their parents’ Netflix accounts. But reputational harm may have already been done. Twitter did not take kindly to the news, with many users pointing out the hypocrisy of the program given the company’s previous statements. 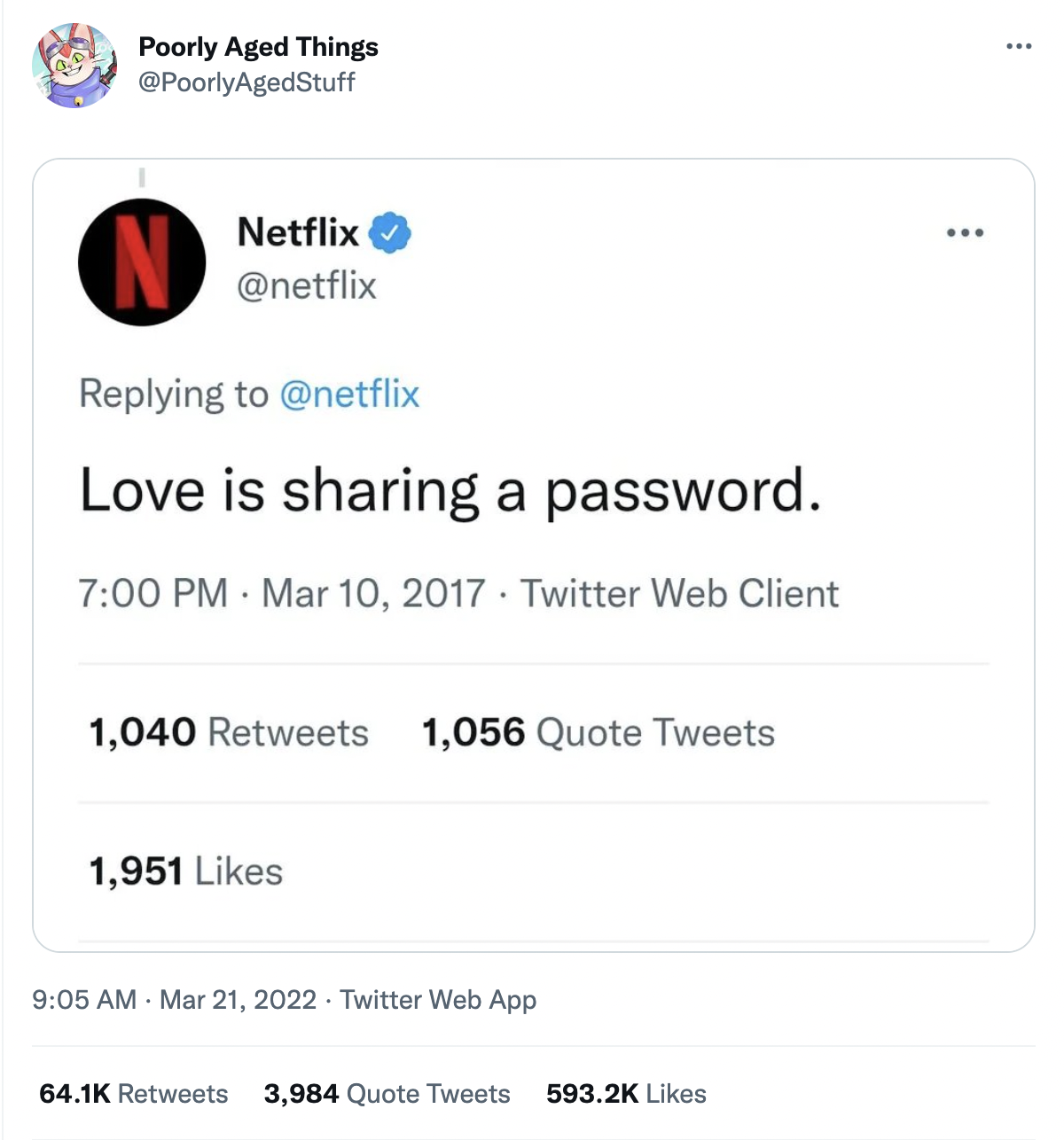 Netflix has recently attempted to diversify its offerings by expanding into mobile gaming. The company has recently acquired game studios like Boss Fight, Night School and Next Games, a Finnish company that Netflix snapped up for $72 million.

Netflix already offers 16 games exclusive to subscribers on Apple’s App Store, but according to data gathered by Thinknum Alternative Data, the parent company of The Business of Business, adoption is slow — only four games have more than 1,000 App Store reviews, which are correlated with app downloads and interest. Eight have fewer than 100 reviews. The week-over-week change in review counts is trending downwards for all of its titles.

While the company says its gaming development is still in early days, the streaming giant has a lot of ground to make up if it wants to compete with popular mobile games. Subway Surfers, one popular mobile game, has 1.6 million App Store reviews, dwarfing Netflix’s offerings.