Whatever happened to Blackberry? From market leader to intern farm

They're trying to make a comeback, but their best bet is in the autonomous car sector

Long ago in a galaxy far far away, every leader, every Senator and Congressman, every CEO and CIO, every someone trying to be someone insisted on using a Blackberry. It kept you connected, it did email better than any other device, it put all the information you needed to gain that critical edge in the palm of your hand.

Then came the iPhone. And then Android.

And Blackberry? It simply couldn't keep up. Practically overnight, the Blackberry went from the market leader to the market joke. By the time President Obama became the first world leader to use one in 2009 (they let him have the phone he was used to after transitioning from senator to President - with many security modifications), Apple ($APL) had released the iPhone. Within 8 years, Blackberry went from dominating the gloabal market to... insignificance.

UPDATE: To clarify, there was once a company called Research in Motion (RIM), which developed the Blackberry phone and took it to global domination. It changed its name to Blackberry in order to better reflect its core business. Once that core business tanked, it licensed out the name to another company, TCL. Blackberry phones are now made by a TCL subsidiary called Blackberry Mobile which has nothing to do with the company which morphed from RIM to Blackberry and now Blackberry Limited. The company called Blackberry Mobile still makes phones, but it claims just 0.3% of the world market. From 50 million units sold in 2011, it only shipped about 700,000 phones in 2017. Could they come back to snag 3 to 5% of the world handset market? That's what they claimed at Mobile World Congress last week, but it's hard to see that happening. As for the original Blackberry that no longer makes Blackberries: according to company spokesperson Samantha Thai, "BlackBerry Mobile/TCL Communications is not the same as BlackBerry the company, which is poised for a great future given the need for security in today’s connected world."

Blackberry Limited ($BB) is attempting a pivot into security services, and particularly the soon-be-burgeoning world of autonomous vehicles. According to Wikipedia, they have more than 4,044 employees. But... here's a chart of hiring by Blackberry Limited , from our Thinknum data trail:

Wonder why it's got those weird roller-coaster rises and falls? It's because the bulk of the company's hiring these days is for interns.

This isn't actually that bad a strategy. RIM is headquartered in Waterloo, Ontario, precisely because it's the home of one of Canada's top engineering universities. If you want to farm the best up-and-coming talent, this is one way to go about it.

The website Recode put together a pair of devastating charts, based on data from Gardiner. First, the rise and fall of Blackberry: 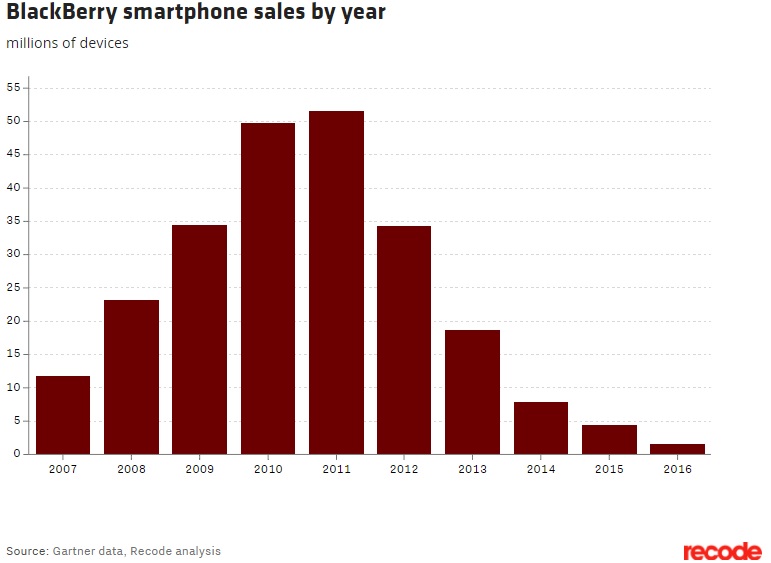 And they managed that spectactular collapse at a time when the smartphone sector was exploding: 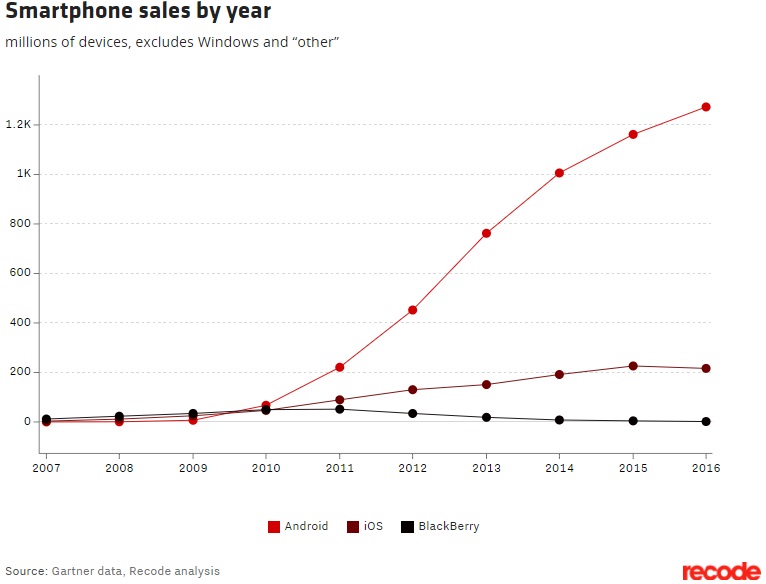 The future is calling?

The Motley Fool website issued a buy recommendation for BB early this year, based on the traction it's getting in the software and support sectors, including government contracting and the rapidly-growing autonomous car sector:

There's a huge opportunity for BlackBerry in securing communication among connected cars and self-driving vehicles, as well as in vehicle telematics. It has stepped up its efforts in the automotive space via recent partnerships and customer wins.

For instance, BlackBerry's QNX software platform was selected by 10 automotive suppliers in the last-reported quarter. The software specialist now counts the top three automotive component suppliers -- Bosch, Denso, and Magna -- as its clients. This follows BlackBerry's recently announced partnership with Qualcomm for the use of the QNX software platform in the chipmaker's hardware offerings that will be used in vehicle cockpit equipment.

And as The Street points out, the auto sector has potential for huge growth, and Blackberry is on the ground floor:

[CEO John Chen] had a keynote presentation at the Detroit Auto Show, where he introduced BlackBerry's new cyber-security system, Jarvis.

Jarvis is aimed at finding vulnerabilities in self-driving and connected vehicles. Perhaps a widely overlooked piece in the autonomous driving puzzle, security is important as ever these days. Not only that, but Jarvis can also be applied to other Internet of Things products.

One final thought: Perhaps a name change is in order? Since the company has nothing to do with making Blackberry phones, and instead now specializes in researching systems to help keep rapdily moving vehicles on track and out of accidents, may I modestly suggest changing the name of the firm to: Research in Motion?