The ambitious, bold and hungry start their week with The Business of Business!
Tech
1.5.22   4:55 PM Tech

Hilarious memes led me down a Mongoose Coin rabbit hole. Here’s what I learned there.

I was scrolling Twitter one day (as I do, perhaps unadvisedly, every day) when I came across a Tweet from a U.S. congressman that caught my eye. Rep. Brad Sherman, a Democrat from Los Angeles, was tweeting to encourage donations to help the communities devastated by the Kentucky tornadoes.

But Sherman’s tweet also mentioned something else, something he called “the emerging mongoose community.” This was too funny to ignore, so I dug deeper. Of course, the congressman’s post quoted a tweet from an account called @mongoosecoineth, so my suspicions were immediately confirmed: This had something to do with crypto. 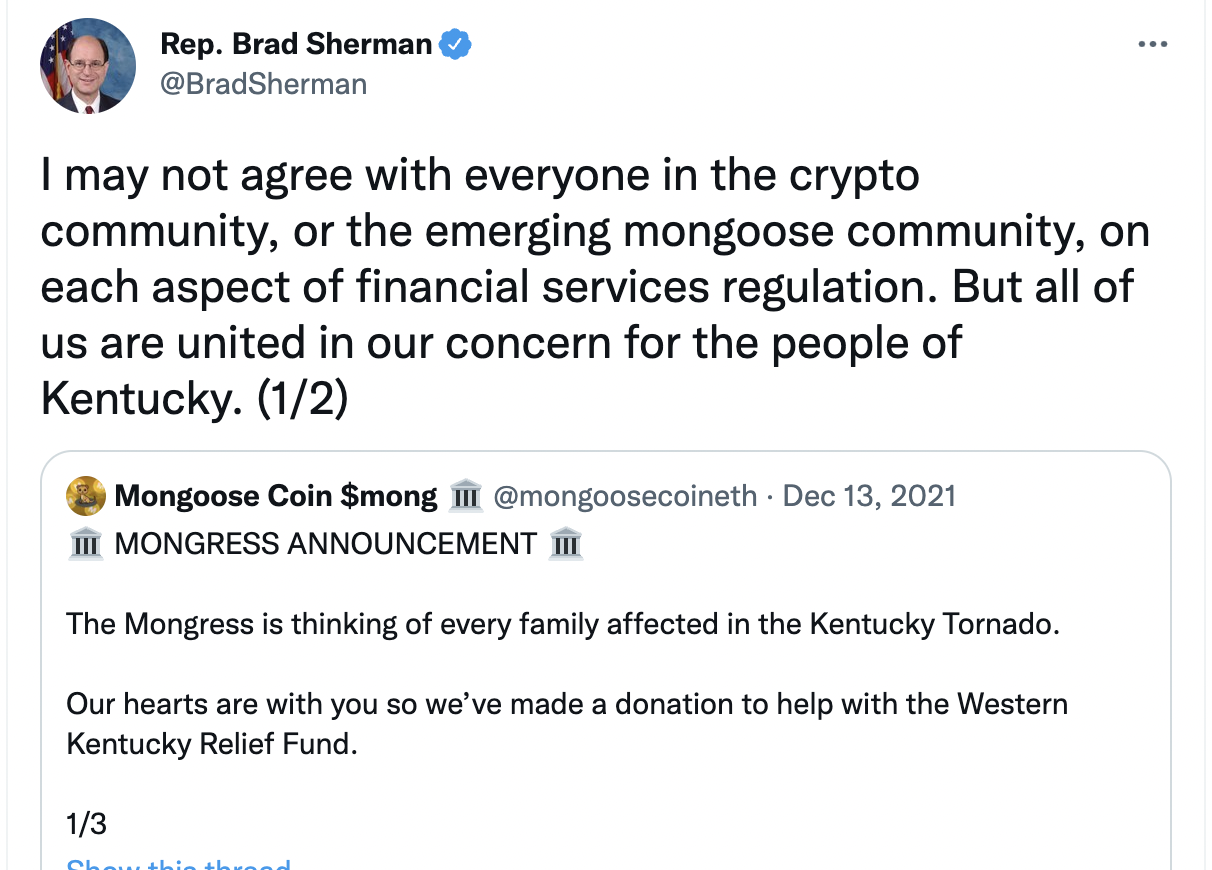 I dimly remembered that Sherman had mentioned a litany of hypothetical animal coins during a much watched congressional hearing involving the industry’s leaders. Further digging revealed an earlier, slightly mysterious tweet from Sherman that included photos of mongooses with different kinds of prey between their jaws. It ended with Sherman noting that this was “not financial advice.” It seemed Sherman had magicked a coin into existence when he mentioned a hypothetical “Mongoose Coin” as one that could replace existing cryptocurrencies like Bitcoin and Ether, rendering them useless.

I became more intrigued. I followed the quote-tweet to check out @mongoosecoineth’s profile. “Named by Congress. Made by the Mongress.” I guffawed. Before long, I found myself tweeting about $MONG and searching for hilarious memes about it on Twitter (there’s a great Braveheart one where Mel Gibson’s face is swapped with Brad Sherman’s, but sadly it’s only on Telegram. I quite like this one on Twitter, though).

In short, I was MONG-pilled. Somehow, despite my vows not to, I had fallen for a meme coin, usually defined as a cryptocurrency created not to solve a real world problem but instead organized around a joke or a theme.

I had avoided the siren song of meme coins—from the creation of DOGE to its mutations, SHIB and FLOKI— throughout my eight years in crypto, but I found the $MONG meme irresistibly funny. The appeal was some combination of Sherman getting crudely photoshopped into memes; the coin holders’ insistence on applying a Congressional theme to everything; and Sherman’s own, subtly hilarious tweets referencing the cryptocurrency.

Perhaps my tale of grappling with meme coin-fever for the first time could be useful for people new to crypto. After all, the space is rife with pitfalls: There are outright frauds designed to fleece newbies, but there are also basic user mistakes that can cost neophytes serious money.

Here’s my account of how I journeyed into the meme coin realm and what I learned there.

My first port of call was checking out the official accounts associated with the coin. This can be somewhat tricky with crypto projects, since many of the most meme-able ones are spun up by collections of pseudonymous developers and boosters. This was the case with MONG: no full names were published on its website.

I then joined the MONG telegram group. About 8,000 MONG enthusiasts were gathered there. I also discovered that I was becoming the object of some targeted shilling from the assembled MONG faithful, as the chat admin was highlighting my tweets asking for more information about the coin and exhorting MONG holders to hit me up. “CZ follows him,” noted one member of Mongress. (No doubt, catching the attention of the Binance founder would result in a large upward movement for MONG.)

The Telegram group was rife with absurdly funny memes (there’s an official anthem). It also contained a bot that posted a message every time someone bought or sold MONG. Each buy was accompanied by green bubble emoji, with more emoji suggesting a larger purchase. Each time they appeared, the Mongress on Telegram would explode into rocket and moon memes featuring Sherman prominently. So far, so funny.

To buy or not to buy

How exactly does one purchase MONG, I wondered. It turns out I didn’t have to wonder for long – the official website contained a prominent link telling visitors exactly how to do so.

The “How to Buy” instructions included details on how to set up a crypto wallet for the first time. The next step was to go to Uniswap, the decentralized exchange. You then had to paste in the Ethereum address where the $MONG smart contract resides, allowing you to swap Ether for Mongoose coins.

Ominously, the instructions also said to set slippage to 15%, the maximum allowed on the Uniswap interface. This suggests that liquidity for the coin is shallow. Slippage is the phenomenon where the actual price of a trade is lower than the expected price. This happens when there isn’t liquidity, or volume, to support a trade. Setting slippage to 15%, as instructed by the $MONG website, means a trader is prepared to lose up to 15% of the expected value of the trade to get it done.

I confess, I tried a couple of times to actually buy some MONG in the heat of the moment. I had some spare MANA, the native token of the Decentraland metaverse, lying around so I thought I’d convert it to ETH to ape into some MONG.

Alas, after several tries, the transactions wouldn’t settle, and since I was doing it all on my phone, I never bothered to look into the reason why.

More sober investigation shows that the MONG-ETH liquidity pool on Uniswap has over $12 million in it. This means traders can swap MONG or ETH against $12 million worth of the tokens, held in a Uniswap liquidity pool. It had seen some $3.5 million in trading volume in the last 24 hours before I started poking around. Is that a lot? For context, over $1.5 billion is traded on Uniswap every day. So, it’s not much.

The next step in the due diligence process for a new coin is usually to scan the whitepaper. These documents are typically written up and published before a cryptocurrency is launched to attract developer and investor interest. They also set out the parameters of the proposed cryptocurrency, and they can be cross-referenced once the project has actually launched and money is at stake.

I checked the official website in December and discovered that meme coins move way faster than traditional cryptocurrencies. The coin had launched, but the whitepaper wasn’t scheduled to be published until sometime in 2022.

A “litepaper”, an abridged version of the canonical document, was promised in 2021, which left less than a week for publication as of the day I went looking. Not a good sign.

The website does contain a “roadmap” section, which might offer a clue to the project’s future. Among the mongoose-themed puns (“Take your seat in Mongress.”) was a vague plan for a token-gated Discord, the aforementioned white and lite-papers, and something called MongFi, a mongoose-powered spin on DeFi. There was also a promise to have MONG governed by token holders via Snapshot voting, a mechanism that’s widely used in DAOs today. The last phase of MONG development contained a final bullet point, in bold: “Replace the dollar.” Super funny, but also not likely.

Further investigation revealed that MONG wasn’t even the only mongoose themed coin. A rash of them appeared in the wake of Sherman’s remarks, confusingly on different blockchains, ranging from Avalanche to Binance Smart Chain and Polygon. I had missed a mongoose money explosion, it seemed.

To recap, my findings so far weren’t filling me with confidence. No team members legal names were listed on the project’s website; it didn’t even have a whitepaper setting out the project’s parameters; liquidity and volume was thin; and a rash of competitors and imitators were out there. The rational investor would pass on holding any MONG.

But that’s not stopping some from joining the Mongress. Just 14 days after MONG was created in the wake of Sherman’s remarks, I noted that it was trading at about 500% up from its launch price (though it does look like it has come down a bit since then), according to data site Coingecko. The value of the entire MONG supply is about $86 million. Over 13,000 different wallets hold the token, according to analytics site DEX Tools. And it looks like an NFT launch is planned for January 7.

As for me, I’m still on the sidelines of this particular meme coin. Whether mongoose money is the next rocket ship to the moon or an unfortunate rug pull, I’ll be watching from afar. I’m only in it for the memes.