The ambitious, bold and hungry start their week with The Business of Business!
Tech
1.6.21   4:00 PM Tech

Even Twitter isn't sure why it bought podcasting app Breaker

First with Fleets and now with Spaces, Twitter is trying to be a one-stop-shop social media hub.

Twitter is where we go to Tweet— for now. The latest sign that the platform is ramping up efforts to expand beyond text-based broadcasts came on Monday, with news that the company has acquired podcast app Breaker.

Although the deal echoes Spotify’s acquisitions of Gimlet Media, Anchor, and Parcast, Twitter isn't getting into streaming (though Jack Dorsey could still end up in an arms race with Spotify if he’s serious about Square acquiring Jay-Z’s TIDAL). Instead, Breaker will be dissolved on January 15 and its team — co-founders Erik Berlin, Leah Culver and lead engineer Emma Lundin — will help build out Twitter Spaces, a new Clubhouse-esque audio chat feature, where users will host live audio and video discussions with multiple participants. Twitter announced the soon-to-come feature, which is in beta-testing, last month.

What is Breaker and why did Twitter buy it?

Financial details are opaque when it comes to the Breaker deal. While there’s no public price tag, Breaker was likely a small-fish acquisition, given the app is just four years old and just starting to gain momentum. Breaker’s Apple store reviews jumped 9% in 2020, but its 4,210 ratings pale in comparison to podcast apps like Spotify-owned Anchor’s 83,000 reviews or Amazon-owned Audible’s 3.2 million.

Twitter might have picked Breaker for the price or for its creators' expertise in “social media.” Breaker was labeled, if optimistically, “the Instagram of Podcasts,” around its launch, though it could also be described as the Depop to Spotify or Apple Podcasts’ Facebook Marketplace.  Breaker functioned as a social, community-focused podcast app, where listeners could like and comment on episodes, as well as follow, DM, and send episodes to friends in-app.

Twitter's purchase carries weight in context of other recent deals. The acquisition is looking like a sister deal to Twitter’s three-week-old acquisition of Squad, a video-chatting and screen-sharing app. Squad shuttered on December 12 and its team now works at Twitter, where, according to Twitter’s product VP Ilya Brown, they’ll “help bring people new and creative tools to start conversations on the service” using a “deep understanding of how people participate in interactive audio and video conversations.”

Both Breaker and Squad were picked up after Twitter’s marginally successful attempt to replicate Instagram stories with Fleets. Last month, Twitter also shuttered Periscope, a live-streaming app it has owned since 2015. Twitter has since integrated Periscope’s capabilities into Twitter Live, which launched in 2016. These moves are clear signs that Twitter wants to be a one-stop-shop social media hub. It looks like we’ll soon be able to spiral about the news and overshare details about our anxiety, out loud and on camera, via Twitter. Happy new year! 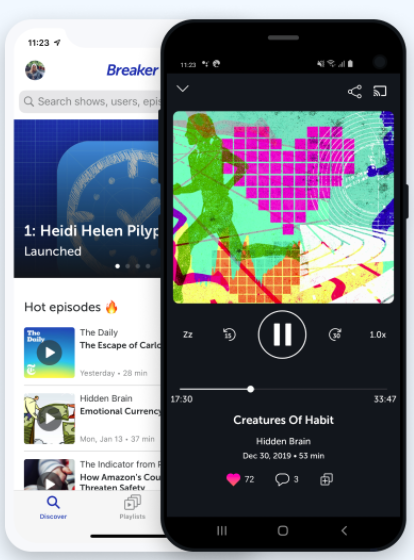 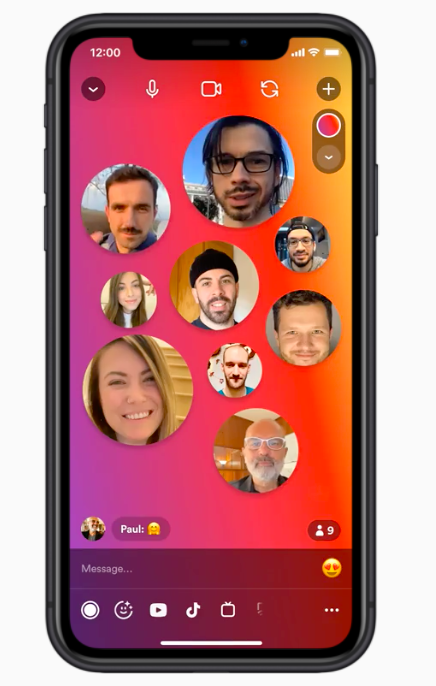 Screenshots of Breaker (top) and Squad (bottom) from their websites

In a lengthy, vague thread posted last month, Twitter described Spaces as “a small experiment focused on the intimacy of the human voice” that will feel like “a well hosted dinner party… you don't need to know everyone to have a great time.”

It’s easy to picture Twitter replicating the Clubhouse-like virtual hangout rooms that were formerly available on Squad. Squad’s special sell was social screen-sharing, replicating the experience of friends hanging out together while scrolling Twitter, showing each other memes, or playing YouTube videos. It’s not clear if Twitter is envisioning Spaces as a place for political debates and lectures, co-scrolling with friends, or, in line with Clubhouse, exclusive Blue Checkmark cocktail parties.

It’s even less obvious how the Breaker team will bring their podcasting experience to bear on the new audio-visual front of Twitter. Their new roles are as vague as co-founder Leah Culver’s announcement that she’s “excited to help create the future of audio conversations.” In his farewell post, CEO Erik Berlin shared that he’s “inspired to go even further in re-imagining how we communicate with each other, beyond the scope of traditional podcasts.” One clue: during the roll-out of Fleets product designers told TechCrunch that they were working on audio tweets and direct messages.

First Fleets, now Squad and Breaker. One explanation for the concerted campaign is pressure from investors. Twitter claimed Fleets, the first hint at Twitter’s ambitions, were created as a platform for people who scroll but don’t Tweet, or see Tweets as too permanent and intimidating. That’s what they said. According to Gizmodo, Fleets were also a demand by Eliot Management Group, a hedge fund with a minority stake in Twitter, who said Twitter wasn’t innovating enough.

There's also the pressure to ramp up advertising efforts. Twitter has failed to create the same kind of advertising apparatus as Instagram and Snapchat, and has struggled to successfully ad-target. Especially compared to Instagram’s sleek, hyper-targeted ads, Twitter has fallen behind, with with flaws in their system that have promoted scams and allowed targeted ads based on the key-words like “neo-nazi” and “bulimia.” Jack Dorsey said in July that he’s exploring new ways to make money from users, including a subscription model. Advertising also likely had something to do with Fleets. Marketers see temporary stories as highly promising and Fleets was designed to generate activity on Twitter in general.

Twitter’s recent acquisitions also include mobile adtech firm CrossInstall, which has helped bring gaming ad dollars in particular to Snapchat and Facebook. Whatever Twitter Spaces ends up being, it’ll most likely be a new place to see ads on Twitter.

Twitter wants people to use Twitter in more ways. There are also hints that Twitter sees diversifying and making conversation channels more interactive as a solution to critiques of the platform: overly reactive, simplistic discussion, anonymous cyber bullying, lack of censorship, and doomscrolling. Twitter engineer Michael Montano said he was looking forward to Breaker “[sharing] their experiences in the space to improve the health of public conversation on our service.”

But are audio tweets and video-chatting with mutuals really what people want? To some extent, Twitter seems to be trying to fix its longstanding problems, but the changes might just make them worse. Fleets, perhaps the biggest change to Twitter’s product so far, was introduced as a way to engage the users who scroll through Tweets but don't post any of their own. The feature was met with tepid reception, cracks about Fleets being “coward mode,” and concerns that the difficulties of censoring audio and video would exacerbate, not solve, Twitter’s racism and bullying problems.

As Gizmodo points out, people do, sort of, hate Twitter — while they ”love podcasts, screen-sharing and watching people’s Stories.” It remains to be seen if Twitter Spaces can tap into those desires.