The ambitious, bold and hungry start their week with The Business of Business!
People
1.10.19   4:51 PM People

Vox Media ramps up hiring, but mostly for contractors and freelancers

In the wake of a union agreement, Vox appears to be turning to temporary and contract workers

Normally an uptick in hiring at a new media company like Vox Media ($PRIVATE:VOXMEDIA) is a good sign. It means that the company is reinvesting in talent. It means that creative people are getting a chance to show the world their talents. It means a good thing for media in an environment that is anything but stable for the younger fifth estate.

New media companies appear to be slowing their hiring activities across the board, so it's nice to see Vox Media's hiring indicators heading in an upward direction.

But something else lies within that job-listing trendline: an increase in hiring for temporary, freelance, and contract workers. This comes after the company agreed to recognize a union of roughly 400 creative professionals employed by the company. It also comes a year after a period of slowing its hiring practices and layoffs.

On the surface, job openings at Vox Media are up 100% since September 2018, moving from 43 openings to 87 this week. For a company that has even the most media-optimistic slightly worried about its future, that's a great sign.

But when filtering those openings for positions that include the word "Contract" in their titles, something else is revealed.

In September, right around the same time that Vox's hiring spree appeared to begin, jobs with the term "Contract" in their titles spiked. In fact, that's when Vox added a "Freelance" category to its jobs listings site.

Removing the "Contract" jobs from Vox's overall hiring activity shows that the hiring spree is somewhat less acute: from those same 43 job openings in September 2018 to 69 this week.

In other words, Vox Media, often cited as a recent bell-weather for the health of the digital content industry, appears to be hedging its bets when it comes to investing in full-time employees, instead turning to temporary, contract, freelance, and part-time workers for some of its properties.

Recent contract job listings at Vox appear to be across the board: from producers for TV series' to editorial positions. It's possible that the listings are seasonal and cyclical now that Vox has gotten into the linear TV game. Whatever the reason — seasons, investing, or union (or a combination) — one truth remains: the organization is turning to freelance workers to get it through the winter.

It's unclear if the contract workers will be union or benefits eligible. Vox's union FAQ says that W-4 employees are eligible regardless of employment status, but 1099 workers are not. 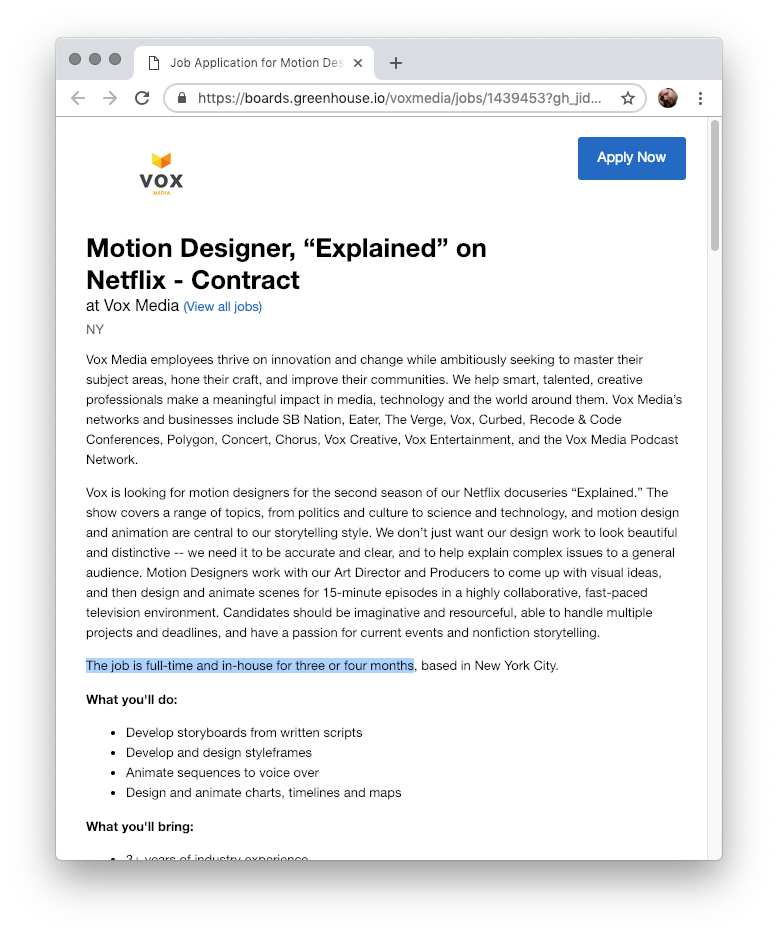 Some of Vox's temporary positions do note that they include "excellent benefits" including flexible hours and parental leave. 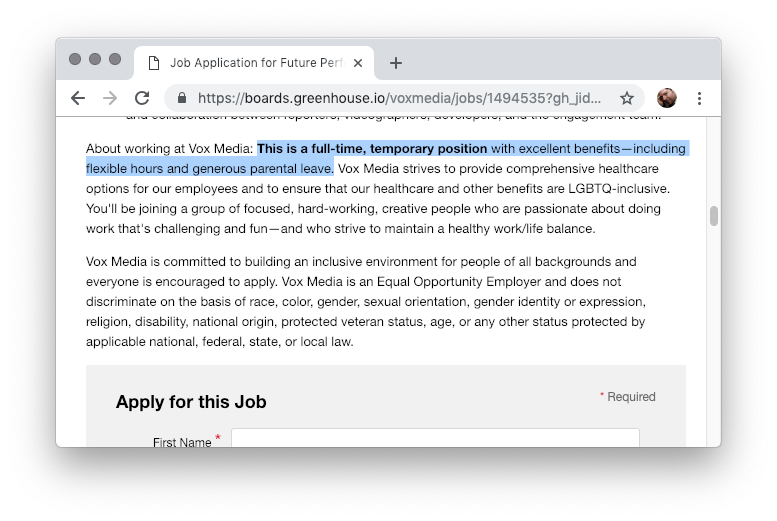 While it's unclear if the contract positions are due to Vox's new linear and seasonal programming, a clever way to skirt the union, or simply a cost-saving measure, it doesn't look as though Vox's workforce is growing. That is, at least according to employees claiming to work for Vox on LinkedIn.

Other big players in the space, including Buzzfeed and Vice, have yet to turn their slowing hiring trends around. Given that, Vox's move in the upward direction here is promising at the very least.