The ambitious, bold and hungry start their week with The Business of Business!
People
5.3.18   12:40 PM People

With similar products and approaches, Walmart and Target have very different approaches when it comes to choosing locations to attract different customers.

When it comes to big-box stores in the United States, few are more omnnipresent than Walmart ($WMT) and Target ($TGT). The two retail giants carry similar catalogs of products, serve vital needs in certain communities, and offer comparable pricing. But their location footprints are quite different both in terms of locations and the customer bases they target, as we found in our data.

When normalizing for thousands of locations throughout the United States, we found that Walmart Supercenters tend to be located in lower-earning zip codes, while Target stores open in top-earning areas. This likely reflects Walmart's prolicivity to open Supercenters in more rural areas while Target goes after higher-earning urban and suburban communities.

As you see in the map below (click for a larger version), Target is heavily concentrated in major metropolitan areas and their suburban communities. While Walmart is certainly well-represented in America's cities, it has a much more diverse presence, especially when it comes to rural areas. 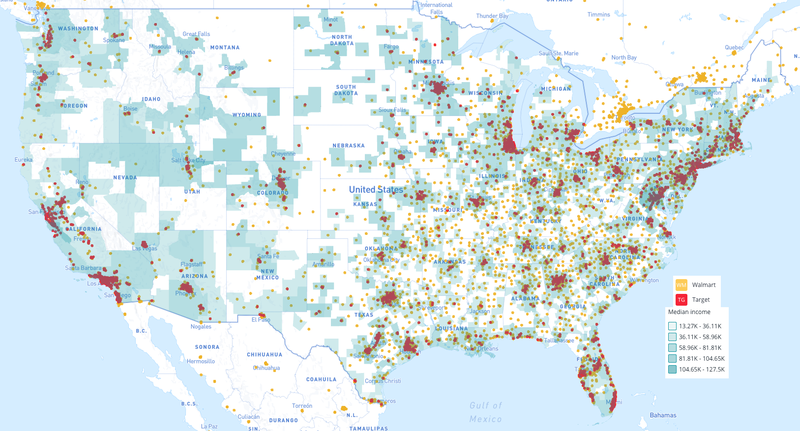 When it comes to the top-10 median-income zipcodes in which Walmart or Target have a store, 6 (or 60%) of those locations are Target stores. Two are Walmarts, and two one are Walmart Supercenters.

Top-earning zipcode goes to a Target location Bethesda, MD where residents earn a whopping $206,050 median income. The top-earning Walmart location is located in zipcode 22182 in Vienna, VA with an also-impressive $189,981 income.

It's intereting to point out that top-earning zipcodes are where we found the most crossover for both brands. Both Walmart and Target have stores in Chesterfield, MO, Princeton, NJ, and Houston, TX.

Like a reverse mirror image, of the 10 lowest-earning zipcodes with either a Walmart or Target location, 6 are Walmart Supercenter locations. Two are standard Walmart stores, and two are Targets. The lowest-earning zipcode at $23,694 is a Target located not in rural America, but in downtown Los Angeles just blocks away from the Staples Center where the LA Lakers, Kings, and Clippers all play.

Aside from the occurence of Walmart Supercenter locations in lower-income areas, we noted that Florida is well represented, with three of the lowest-earning areas located in Miami, Tallahassee, and Florida City.

Note: Subscribers to Thinknum can see the related dataset here.