The ambitious, bold and hungry start their week with The Business of Business!
Markets
4.15.22   9:06 PM Markets

Ride-hailing companies were criticized for hiking prices after this week’s tragedy in Brooklyn, though the surcharges were later reversed.

Following a mass shooting at a subway station in Sunset Park, Brooklyn on Tuesday, people attempting to avoid public transit by hailing an Uber or a Lyft were met with an infuriating, if unsurprising, result.

Fares for Uber and Lyft increased substantially, with some rides priced at more than double their normal rates.

This is far from the first time consumers have raged against ride-hailing companies charging more during periods of high demand. From violent incidents to inclement weather to New Year’s Eve basically every year, surge pricing seems to always hit customers when they’re down. But ride-hailing companies insist that surge pricing actually helps consumers.

How dynamic pricing can help customers

So how is surge pricing different from price-gouging? According to Uber, it’s because the supply of drivers in a given area isn’t fixed. When fares go up in a certain area, drivers flow to that area chasing the higher payouts. Some might even hop in their car, adding to the total number of drivers on the road. In the end, more customers can take an Uber ride than would have been able to, if not for the surge pricing.

Traditional taxi drivers don’t have the ability to increase fares during peak hours, thanks to regulation from state and local governments. That’s why, in most cities, it’s only legal to work as a taxi driver if you have a medallion, which allows for a fixed supply of cabs on the road and a standardized fee based on distance driven. Yellow cabs aren’t as incentivized to service a particularly busy area, since the fares would be the same for a customer anywhere in the city.

So if increasing fares during a period of high demand is good for the consumer, why is it so often met with outrage? Part of the problem is that surge pricing only kicks in when lots of customers want to hail a car, like after the tragedy in Brooklyn.

Another part of the problem is the algorithms used to calculate dynamic pricing are tough to understand — ride-hailing companies are constantly analyzing data in order to determine how much to surge fares, for how long, and which specific areas are affected, leading customers to feel confused.

Lastly, many customers might not understand the supply-and-demand forces at work. Dynamic pricing might not be the same as outright price-gouging, but it certainly feels like it, and screenshots of outrageous fares commonly make the rounds on social media.

This dissatisfaction can be seen in information collected by our parent company, Thinknum Alternative Data. Uber and Lyft are the two biggest ride-hailing companies in the world, but Uber has struggled with low ratings in Apple’s App Store in the past.

Drivers are stuck in the middle

The dynamic pricing model only works because drivers respond to increased fares by chasing the surge. As a result, many drivers report that surge pricing makes up a significant portion of their overall take-home pay, since they’re garnering more wages for doing the same work.

A whole ecosystem of tools has sprung up around surge pricing, helping drivers identify and predict areas of high demand. Drivers also frequently juggle multiple ride-hailing apps in order to capitalize on whichever one is offering the best pay at the time. This price volatility can be discouraging, and some drivers have complained they’re “slaves to the surge.”

Drivers are also incentivized to manipulate the system to their own benefit. In one incident, a group of about 50 Uber drivers at Reagan National Airport turned off their apps as a plane landed, leading Uber’s algorithm to surge prices. The drivers would coordinate turning their apps back on and quickly accept the increased fares.

Why does surge pricing continue?

As much as consumers complain and various government officials try to crack down on the practice, surge pricing is probably always going to happen. One distinct advantage ride-hailing apps have over traditional taxis is their ability to crunch an incredible amount of data in real time, and surge pricing allows them to leverage this data in order to generate more revenue from customers.

Local governments have, at times, capped surge pricing. The practice was initially banned in New Delhi, though now the Indian government imposes a cap on surge pricing at two times the normal fare. In New York City, it’s illegal to price-gouge during a natural disaster, so Uber promised to cap its fares at 2.8x the normal rate before a blizzard struck in 2015.

Despite the push back,, ride-hailing companies like Uber and Lyft have made no move to end the practice. Could they improve its perception, though? Possibly, according to some experts. Rice University’s Utpal M. Dholakia argues that rideshare companies can make reasonable changes like capping fares, communicating surges clearly, and explaining the benefits to customers.

This theory has been shown to work in practice. According to research published by Uber in 2015, using a sold-out concert as a case study, its price surge helped its drivers meet a spike in demand when the concert ended. 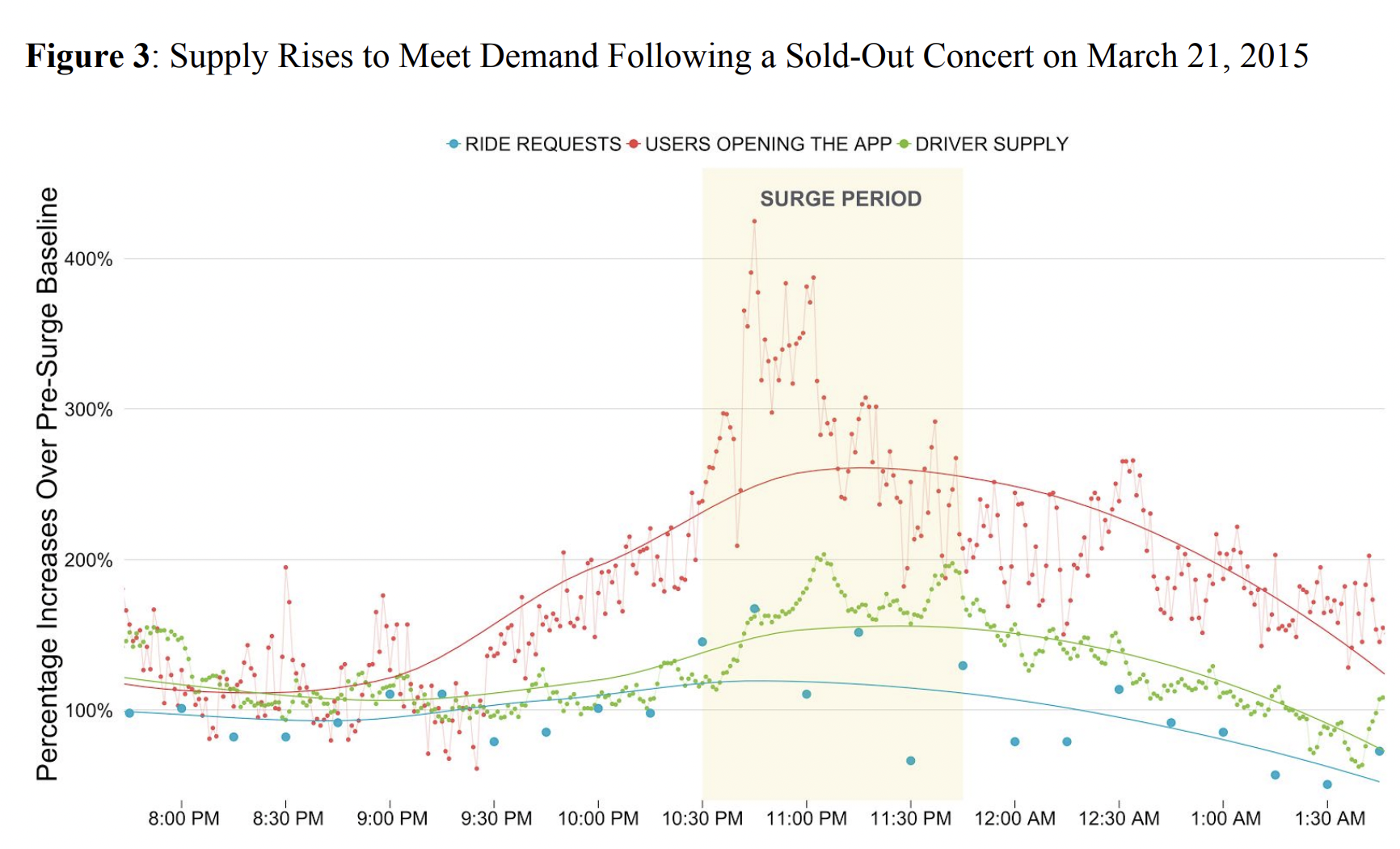 In this graph from Uber’s research, the supply of drivers in the area around a sold-out concert (the green line) rose to meet the demand of users looking to leave the area (the red line).