The ambitious, bold and hungry start their week with The Business of Business!
People
11.1.18   8:22 PM People

These were the biggest social media winners in October

Our monthly roundup of the biggest social media gainers includes Wish.com, Bareburger, and a science research company with a penny stock.

Question: What did you do within an hour before reading this article? Or a better question: how did you find this piece? Most likely, the answer to either of those questions was being on Twitter ($TWTR) or Facebook ($FB). Social media rules our daily digital lives: so who's winning as of late?

This October, some brands made an absolute windfall on Facebook and Twitter, increasing their following by hundreds of thousands of users, or even doubling or quintupling the following they had at the beginning of the month. With thousands of Facebook and Twitter accounts tracked on Thinknum, we can see the accounts that saw the biggest swing in Twitter followers and Facebook Likes during the month.

Yep, Cristiano Ronaldo is still the most popular man alive.

Despite playing for Juventus, a team in a weaker league than Germany's Bundesliga or Spain's La Liga (according to UEFA country coefficients), as well as facing rape allegations, Ronaldo was second only to Twitter's official account in gained followers during the month of October. He also became the most-followed person on Instagram, surpassing Selena Gomez a few days ago.

In terms of actual brands, YouTube, a subsidiary of Google ($GOOG), ranked third in the biggest follower change in October, gaining over 750,000 followers in just 31 days. Meanwhile, the New York Times continues to show that it isn't "failing," bringing in close to 400,000 as the midterm elections loom.

Arrayit ($OTCBB:ARYC), a science research firm whose stock is trading below 10 cents, had a massive follower gain on Twitter. Considering that its social media profile is... Interesting to say the least... we might take this follower explosion with a grain of salt. 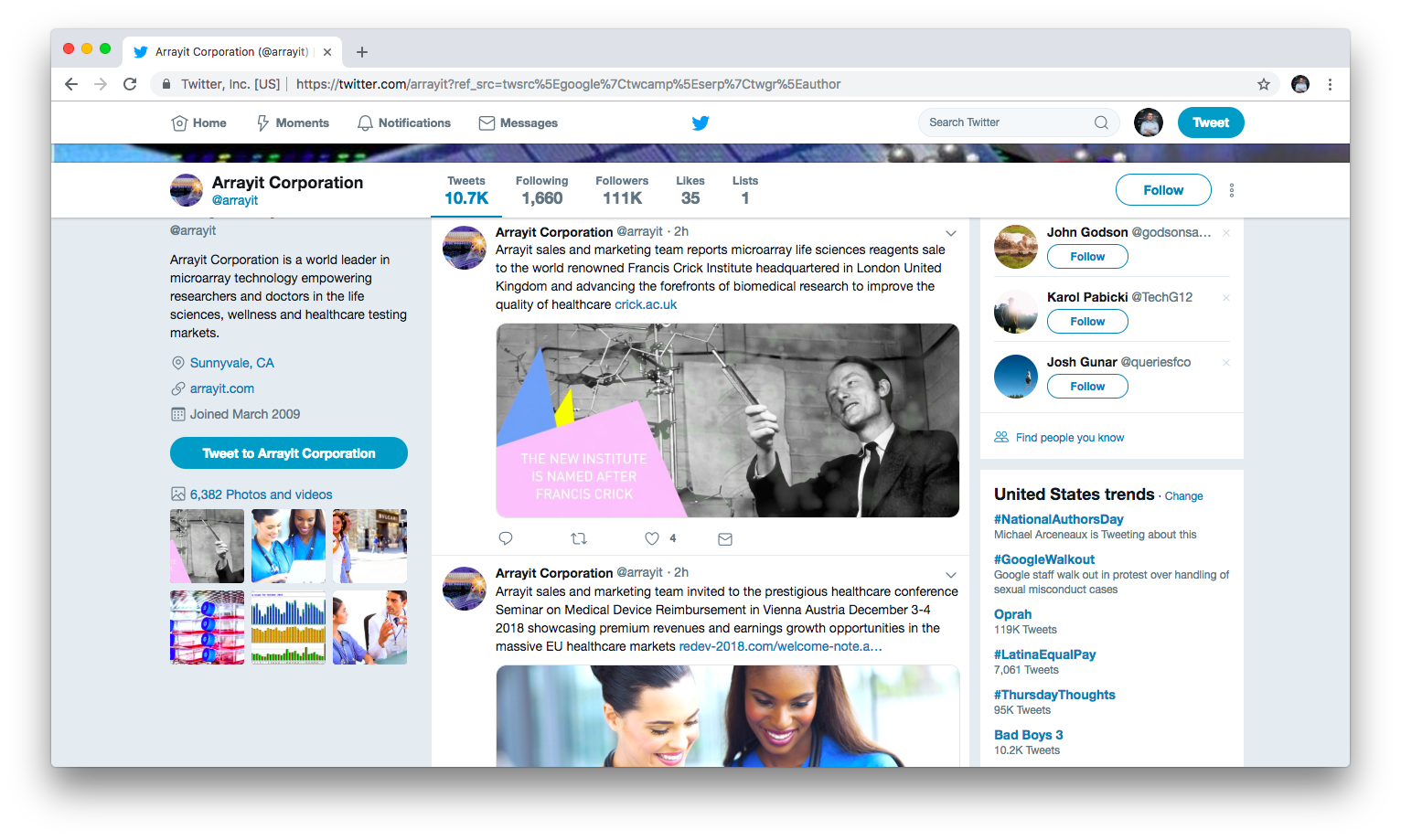 Elsewhere on the list, a few small restaurant chains made respectable gains to the tune of 44% or even 71% increases. Leading that list is Fuddruckers ($LUB), the 39-year-old American restaurant that seems to have found new life in the internet age this October.

Other gainers include Bareburger, PizzaRev and Stonefire Grill, which are all privately owned businesses.

Continuing its breakout year, Wish.com ($PRIVATE:WISH) saw its Facebook page explode with 1.5 million users liking its pages over the past month. The e-commerce company brought in 100 million users in 2017, and has used Facebook as a primary way to further increase its customer base. In fact, it posted up thousands of advertisements in 2017, so much so that it drew some controversy among Facebook's active userbase.

Oddly enough, Facebook's own page didn't get as much of a Like increase, but then again, its following is more than every other page on the above list combined.

Leading the way for the biggest percentage change in Likes is Kimberly-Clark Corp ($KMB), a producer of personal care products such as Kleenex tissues, Cottonelle and Scott toleit paper, and Huggies diapers. It essentially quintupled its following on Facebook in only 30 days, an impressive feat for any company to muster.

Toyota ($TM) had an absolutely solid month on Facebook as well; it had one of the biggest gains in Likes percentage wise and overall. With Toyotathon looming, the company seems poised to have promotions for its big annual sale reach over 3.6 million users on one of the world's most popular social media apps.