The ambitious, bold and hungry start their week with The Business of Business!
People
1.16.19   4:44 PM People

Amazon has figured out a way to get personal, potentially viral, content out on its traditional video game streaming platform, Twitch.

Although Amazon ($AMZN) has its own "traditional" TV streaming service in Prime Video, it owns and operates another massively popular platform for streaming live content: Twitch.tv.

Twitch may have begun as a video game streaming platform, but it's become much more than that. It's also now the host website for live podcasts, DJ sets, workouts, and more. In December 2016, Twitch expanded to allow non-gaming streams — mostly vlogs — on Twitch. And while the roll-out and subsequent support had its fair share of misteps and controversies, live, non-gaming content has helped Twitch give it a leg up against its live-content rival Google's YouTube ($GOOG).

But make no mistake: Live streaming is a massive, growing field that is destined to pick up millions more eyeballs and billions more sponsorship dollars, gaming or not.

So we took a look at the top streamers on Twitch who aren't streaming video game content.

Here are the top-10 non-gaming (that includes "in real life" games like Chess) or gaming-related categories (i.e. award shows) by the sum of average daily concurrent viewership, along with a quick explainer for each category:

Following the divide, a new catch-all category called "Just Chatting" rose just below the top-10 most popular streaming categories on the platform. While some of these streams may involve a bit of gaming, these streams mostly involve people sitting in front of cameras and "acting natural," or in other words, a highly personal reality TV show at its peak and a person just talking to the internet at minimum. 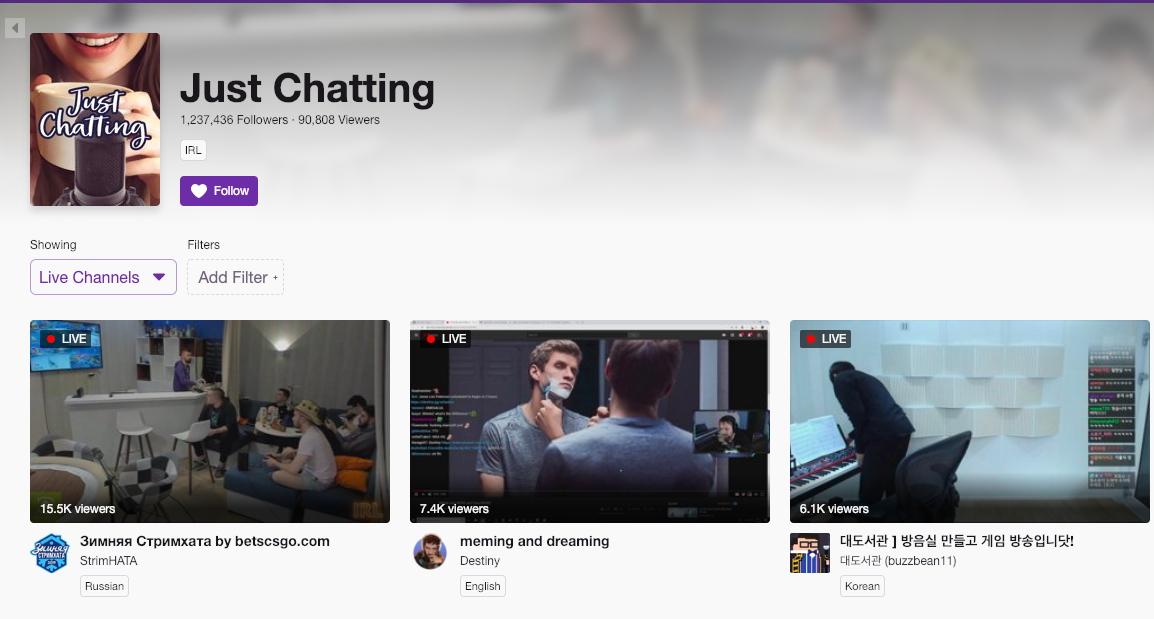 Essentially, Amazon has found a way to effectively fill the trifecta of internet content: traditional shows, sports/gaming, and now, original, potentially viral content. And, if it figures out the optimal way to moderate these channels, it could spell even more trouble for YouTube as Google's video platform continues its struggle to maintain its own rules and establish fair policy restrictions.