One could argue that once the New York Times has given space to an internet meme and youth movement, the kids are already moving on to the next cool and groovy thing. Earlier this week, style editor (and frequent social media rabble-rouser) Taylor Lorenz ran a piece titled "‘OK Boomer’ Marks the End of Friendly Generational Relations" which, despite its pre-revolutionary baiting, was more a simple rundown of this season's online meme that found life when some young netizens found their latest "You don't know me!" signifier.

But now that it's become a thing, and now that the Times has given it ink, and now that enterprising people are already printing t-shirts and cashing in, Google trend data shows that this whole thing is no longer cool among young people, and is drifting into curiosity territory among every day (read: old) people, and nothing is less cool than old people memeing.

During the week of October 20-26, people Googline "ok boomer" spiked to a Trends rating of 100 out of 100, as people frantically sought out ready-made memes and images with which to display their aloofness on various social media platforms.

But the following week (this week as of publishing), interest appears to already be on the wane, dipping to 84 out of 100 (screenshot below, as the data is just coming in and embeds are still being populated). 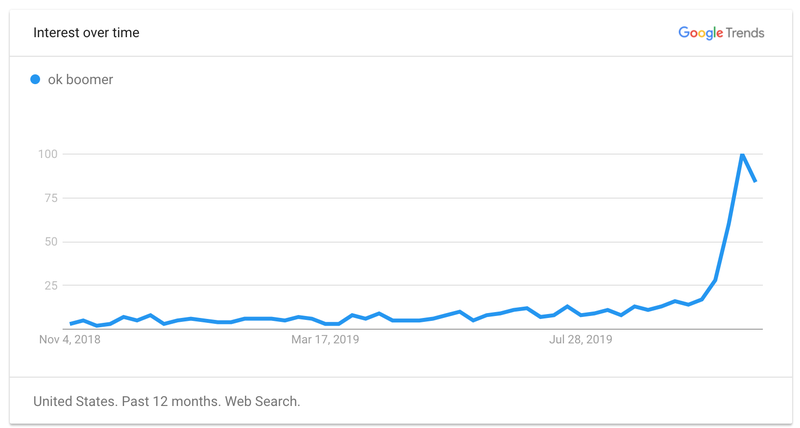 An associated search for "ok boomer meme" is also broken out of the original trend, likely the result of millions of people aking Google, "What's this ok Boomer meme?", indicating that use of the term is rapidly hitting the mainstream (read: used by old people) and, as a result, will fail to be cool among its original, uh, users for much longer.

That all said, it's likely that related merchandise will continue to sell, if not because the meme is still cool, but at least because it's still cool to be ironic, or something. Lorenz notes in her Times piece that 19-year old Shannon O'Connor has already pulled more than $10,000 in orders for a $35 "ok boomer" hoodie. Her catalog has now blossomed to 6 items, including $20 t-shirts.