The ambitious, bold and hungry start their week with The Business of Business!
Markets
7.3.18   2:08 PM Markets

The average Toys 'R' Us location was 46,000 feet. That leaves behind a lot of unused space for Real Estate Investment Trusts (REITs).

The effects of Toys "R" Us closings on real-estate investment trusts (REITs) — the landlords of retail — will be larger than expected. Toys 'R' Us closings are not normal vacancies: these are some of the largest spaces on average by square foot in retail shopping centers and malls.

Data from Thinknum shows the average size of these units is 46,000 square feet with the largest unit at over 80,000 square feet. As of May 1, 2018, here are the top 10 REITs tracked by Thinknum with former Toys "R" Us and affiliate locations:

Simon Property Group ($SPG) will be hurt most, with exposure to 56 Toys 'R' Us store closures. That's 56 large units that need to be filled not only for rent income, but will need to be filled quickly in order to avoid the snowball effect of less foot track to neighboring stores. Tanger Factory Outlet Centers ($SKT) is a distant second with an exposure to 20 Toys "R" Us closures, largely because they were the primary real estate choice for the outlet brand. 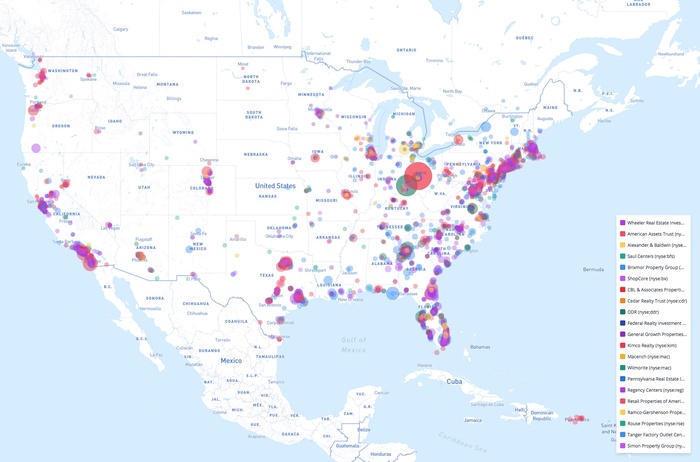 The above map illustrates REITs in America with their relativel square footage in each location represented by the circumference of their circles. 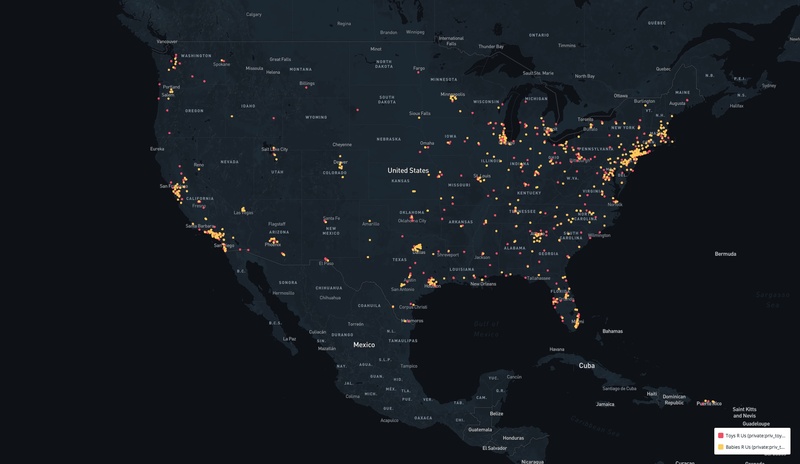 The above map illustrates Toys 'R' Us and Babies 'R' Us locations before their closings.

Most people are feeling nostalgic about the end of Toys 'R' Us, but in terms of the retail real estate industry its closure will be a big hit. The last great toy company is shutting its doors and it's being blamed on investment firms Bain Capital and KKR for the mishandling Toy's 'R'Us's massive debt. Yet it's impossible to deny the impact that online retailers like Amazon had on their bottomline.

In May, I attended the largest annual retail real estate conference in America, RECon, and the overall tone of the speakers was that of optimism. One rationale I heard numerous times was that the retail industry is growing because e-commerce companies are opening physical locations to increase their footprints.

This argument has some merit as a lot of e-commerce companies are opening flagship locations, but this doesn't change the fact that a company with an online focus has less overhead. Even a successful online store attempting to transition to physical locations is a toss up.

Often great comedians turn out to be bad actors.