The ambitious, bold and hungry start their week with The Business of Business!
Markets
3.16.18   8:35 PM Markets

Goodbye, Toys R Us: The data saw it coming

Toys R Us was more than just a retail chain, and its end will leave more of a gaping hole in the American mallscape than your average bankruptcy. Sorry, kids.

The fallout from the Toys R Us bankruptcy and shutdown is just beginning. The retailer was the giant of the sector (even if competitors Walmart and Target sold more volume, overall), and the makers of everything from Barbies to Legos to Wowwee Fingerlings are now wondering where they can turn. What follows are a few data points to help you understand how we got here, and where we're headed next.

Toys R Us (and its offshoot, Babies R Us) was more than just a retail chain: It was a happy place families could shop and play together - not really something you could do in three aisles at Target in between the light bulbs and the camping gear. More important, as a store devoted exclusively to play, it had both the space and the will to take chances on new items, while Walmart and Target just stocked top sellers (including hot new items that had broken in at Toys R Us).

"Toys "R" Us has always been an outstanding partner to Wowwee over the years, and played an integral role in the success of many of our products, including most recently the launch and ongoing popularity of Fingerlings," Wowwee president Richard Yanofsky said in a statement.

"What drove innovation in the industry was knowing Toys "R" Us has the shelf space and the square footage to support new concepts year round," Gary Atkinson, CEO of The Singing Machine Company, told CNN. "Without Toys "R" Us, everyone is going to play it safe. Toy makers will just make toys with mass appeal that are more of a fit for Walmart and Target. That's the saddest part."

Picking up the pieces

Last month, we ran this story -  Toys R Us is closing 180 stores which speculated on reasons behind Toys R Us' problems. One piece of the puzzle: Of the closing stores, 45% were situated within 1 mile of a Walmart or Sam's Club store. That amount of over-crowding probably shaved a few points off Toys R Us profitablity.

The other three biggest chains in the toyselling space are Walmart, Target, and Kmart, and they're the ones who will try to fill the gap.. Again, because of that insane overbuilding, they're at least pretty well positioned for it: 66% of the closing Toys R Us locations are located within 1 mile of one of their three main competitors: 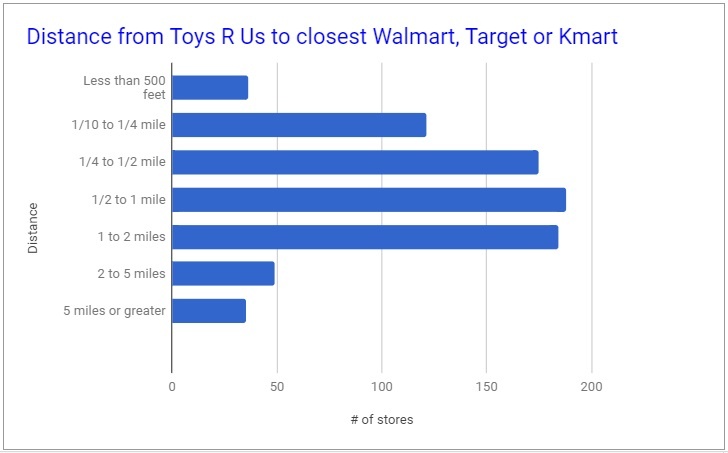 In fact, if we throw all them up against Walmart and Target on a map, you can barely even see the Toys R Us locations: 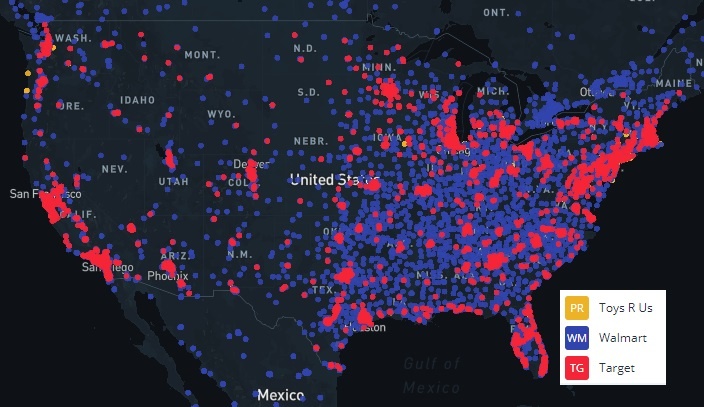 It remains to be seen what the fallout from all these closures will have on the malls themselves. Many of them were already hurting, and many of the Toys R Us locations were in second-tier properties that may have a hard time filling a mid-level space that's too big for a small tenant like a shoe store, but to small for a big tenant like a box store or gym.

As we noted in our January story, "The mall is dead, long live the mall!", retail is reinventing itself to meet the new sensibilities of a mobile, app-driven generation:

The survival of today’s shopping malls and complexes depends on offering shoppers an experience rather than just retail therapy. Other retail manifestations are already doing something similar. Movie theatres with in-seat food and beverage service are becoming common.

Family movie nights on a central lawn, concerts under the stars, culinary pop ups, weekend yoga workshops - all of these are growing trends at urban shopping malls that the large, surburban indoor malls have not yet embraced.

Toys R Us tried to do that, but failed.

One interesting note: There simply weren't enough Toys R Us customers being born. As the Washington Post 's data man Andrew Van Dam points out, after declining during the Great Recession, birthrates in the US have dropped even further to the lowest levels on record.

Toys R Us says that hurt them:

Most of our end-customers are newborns and children and, as a result, our revenue are dependent on the birthrates in countries where we operate. In recent years, many countries’ birthrates have dropped or stagnated as their population ages, and education and income levels increase. A continued and significant decline in the number of newborns and children in these countries could have a material adverse effect on our operating results.

"And that’s why the company’s demise should worry the rest of us," says Van Dam. "Toys R Us focuses on kids, so it’s feeling the crunch from declining birthrates long before the rest of the economy. But it’s just a matter of time before the trends that toppled the troubled toy maker put the squeeze on businesses that cater to consumers of all ages."

You'll notice we haven't blamed Amazon and online sales. While that's certainly part of the picture, we explained last month that Toys R Us could have weathered any one of these storms except for one, fatal, problem: Debt. 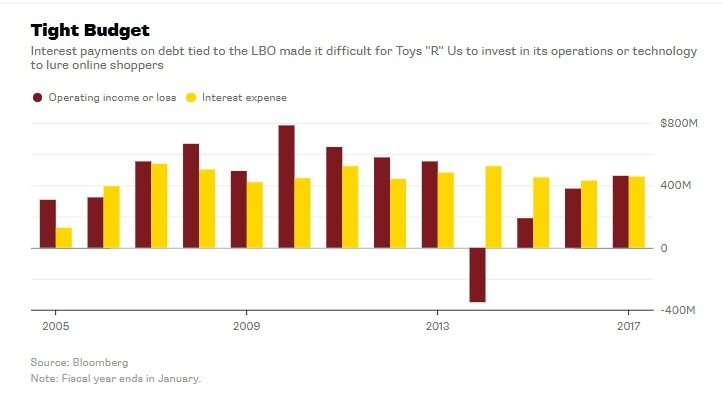 Just look at those numbers. Toys R Us was NEVER able to get its head above water.