My stepfather has driven a Toyota ($TM) Camry since the 1980s. His last one, a 2006 Hybrid with over 200,000 miles on the odometer, was finally traded in for a candy-apple red 2018 special edition. Like a proud father he sent pictures to all his children and even to the two grandchildren with smartphones.

He loved it. He sent tawdry closeups of the aggressively designed front grille. He boasted of its technological prowess. He asked for bike rack recommendations. He planned upcoming road trips.

And then the Camry updates stopped. He'd returned the beloved brand-new car for its big-brother Avalon.

"It doesn't work," he complained. "They make you use this Entune app and the GPS doesn't work. The music doesn't work. It's a mess. Everyone hates it. The dealer said I should just change to the Avalon. Apparently I'm not the only one."

It seems the app is so bad that people are beginning to avoid the Camry alltogether. App store ratings of Toyota Entune 3.0 App Suite reflect the poor performance. 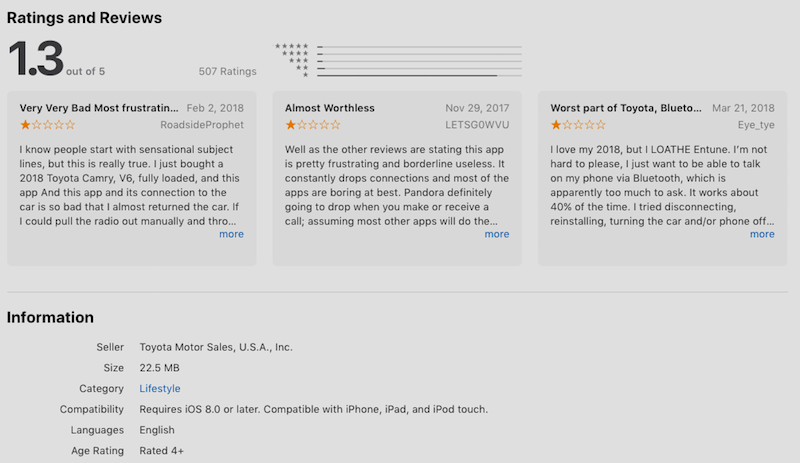 And we're not talking just a few angry users, either. Review counts of the app have been pouring in - and accelerating:

Meanwhile, the regular version of Entune for other Toyotas, simply called Entune, is faring even worse with a poor 1.0 out of 5 since May, 2017.

That app, which works with Toyotas other than the Camry, has also seen a growing number of users giving poor reviews, with over 2,380 poor ratings as of this week.

Entune promises to consolidate mobile apps and related functionality into the vehicle's center console display. This includes navigation, car status, entertainment, and even remote connect for things like unlocking doors and starting the engine.

The problem, it appears, is that it forces Camry users to utilize a buggy app to access these features. If the app doesn't work, the whole car, in many aspects, doesn't work. That's problematic, as you can imagine.

This review from user waveecho on March 9, 2018 explains some of the problems:

Where to start. Toyota should cease promoting the Entune system and “app suite” as good or competitive. I’ve been profoundly disappointed with the functionality of the Entune app and overall entertainment: nav included with my Highlander. The only function I continue to try to use is Pandora. It works better now than six months ago. However, compared to the native iOS app, the Entune version isn’t good. Loading time for first song, regardless of iPhone network connectivity (LTE or say WI-FI in my garage) the Entune Pandora app takes 4-5x as long to load.

Then there is the the issue of repeated logins. This at least has improved from needing to login every time I tried to use an Entune function like Pandora, to every few weeks. I still don’t understand why Toyota can’t fix this. Makes the whole Entune app first dangerous, because I don’t know I need to login until I’ve already started driving (see above mention of glacially slow loading time) and then plain useless.

Really terrible Toyota. Hands down the biggest and really only disappointment with my Highlander. Profoundly disappointing

This review from user RoadsideProphet for Entune 3.0, the Camry-focused app that had my stepfather returning his brand-new, candy-red Camry rings even worse:

I know people start with sensational subject lines, but this is really true. I just bought a 2018 Toyota Camry, V6, fully loaded, and this app And this app and its connection to the car is so bad that I almost returned the car. If I could pull the radio out manually and throw it through the window of Toyota Motor Corporation‘s headquarters I would. It is absolutely awful. And I decided to write this review when I went to remotely start my car, I know it is a different app, but also Toyota, and now the remote start app is having trouble, so it won’t start, and we just had a snowstorm and I have ice and snow on my car. I know they say these are “first world problems “but I paid a lot of money for the car, and Toyota is one of the best car companies out there, and I just cannot believe that they messed up so badly with Toyota Entune and their other apps, and almost all electronics in the car. When I start my car if the radio is on very loud previously, the radio is blasting and I cannot lower it until everything loads in which is a minute or two. Doesn’t sound like a lot, but if someone is in the car that does not like loud or my music, I can’t lower the radio. Who designed all of this?

What's next for Entune and Camry?

Along with the RAV4, the Camry has been Toyota's best-selling car for years. In fact, it was America's top-selling passenger car for 15 years until 2016. But in 2017, Toyota launched Entune 3.0 for the Camry. That same year, the Honda Civic displaced the Camry as America's best-selling car. While this may be a coincidence, when you force your drivers to use an app that hamstrings some of the car's most essential functions - navigation, entertainment, and status - the entire driving experience is undermined.

Entune was original released for the popular Prius hybrid. Despite its poor reviews, it hasn't seemed to hurt sales of the Prius. Entune 3.0, however, is based on the Automotive Grade Linux platform, while the original Entune was based on the Blackbery QNX. Given the more open-source nature of Linux, this could mean more third-party apps for the new system. It could also mean more rapid development and feature fixes from Toyota themselves.

On paper, Entune 3.0 looks like worthwhile technology. Like Apple Car Play and Ford Sync, it promises to consolidate technology and driving in a convenient, safe manner. Unfortunately, when it simply doesn't work, the whole car comes up short.

We reached out to Toyota and haven't heard back as of publishing. We'll update when they do weigh in on the matter.