The ambitious, bold and hungry start their week with The Business of Business!
People
4.18.18   6:03 PM People

Where people selfie the most - the data is here

When it comes to social checkins, movie theaters and fast food rule the world.

When Facebook ($FB) opened up its "Were Here" counters in 2012, marketers and investors alike foamed at their respectives mouths like hungry cats.

That's because for the first time, they had a social media metric that combined how people perceived a brand online with real-world location data. Facebook's Were Here count measures how many check-ins, mobile device shares, and photo location tags have been created at a business. It's a powerful measurement tool because it shows where Facebook users are actually going when they're not just sitting at home clicking "Like" buttons.

We've been tracking Were Here counts at Thinknum for years.

Given the size of Facebook worldwide - 2.2 billion users worldwide, or 29% of the world's population - it's the most objective metric for real-world foot traffic that the world has yet seen.

So given its import, where are 2.2 billion Facebook users going?

Turns out they're following the classic night out: a bite to eat and a movie.

Taking the top Were Here count as of today with 40,083,333 counts is Regal Movies, which includes Regal Cinemas, Edwards Theatres, and United Artists Theaters. It operates 560 theaters in 43 states along with Guam, Saipan, and American Samoa.

Of the top-10 Were Here Facebook counts, half are restaurants, which isn't a huge surprise given the number of food selfies shared on Facebook. 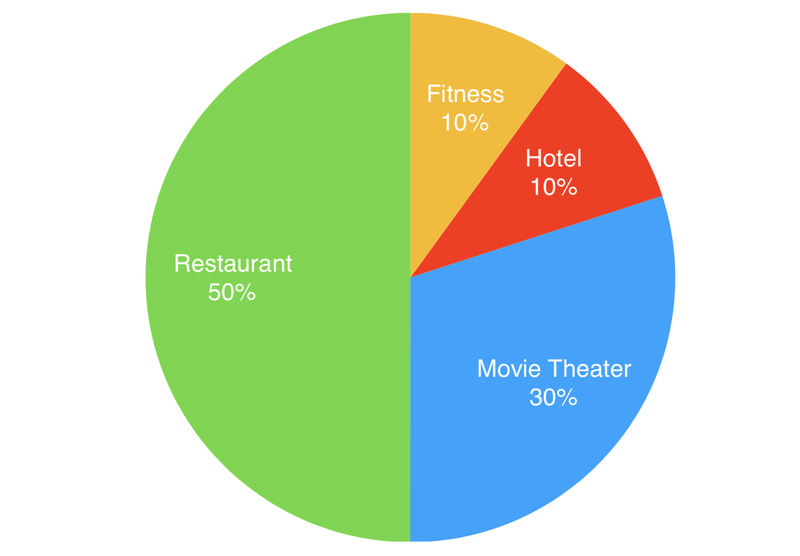 Movie Theaters, such as leader Regal Cinemas, AMC, and 8th-place Cinemark, make up for 30% of the top-10 Were Here counts.

One gym and hotel chain — Planet Fitness and Hilton, respectively — make up the rest of the list, signaling that when it comes to letting people know where you are either through active check-ins or photos, fitness and travel remain important foot-traffic and commerce drivers.