The ambitious, bold and hungry start their week with The Business of Business!
People
10.2.18   7:17 PM People

Bumble vs. Tinder vs. Match - who will win the dating app race?

Match.com, Tinder and Bumble have some serious relationship problems, sparked by a race to be the #1 dating app in the scene and by several high-profile lawsuits.

Believe it or not, humans have been dating online for more than two decades.

GenXers first got a taste of this brave new world in their 20s when Match.com ($MTCH) made its debut in 1995. JDate came out in 1997 and eHarmony brought its algorithm to the game in 2000. A generation later, Tinder hit the scene and introduced the streamlined concept of swiping for matches.

Today, Tinder is up against a billion-dollar valuated rival in Bumble ($PRIVATE:BUMBLE), where users also swipe for matches, but with a few extra steps. When a match is made, the woman must make the first contact within 24 hours, and the man must respond within another 24-hour window. If that doesn’t happen, the match expires.

Although all of these dating apps use different methods to match users — Match.com is old school compared to Tinder and Bumble — they are tied up in a very peculiar relationship. Match.com is the granddaddy of dating apps. Its parent company, Match Group, which is under holding company IAC, owns Tinder. Meanwhile, Bumble was founded by a former Tinder employee.

If that sounds incestuous, it’s because it is. These three dating apps lead the category and compete to claim the title of “#1 Dating App.”

The #1 dating app as told by Facebook active users

Match.com has long claimed to be the #1 dating website, going so much as to label itself as such on its official iOS application. 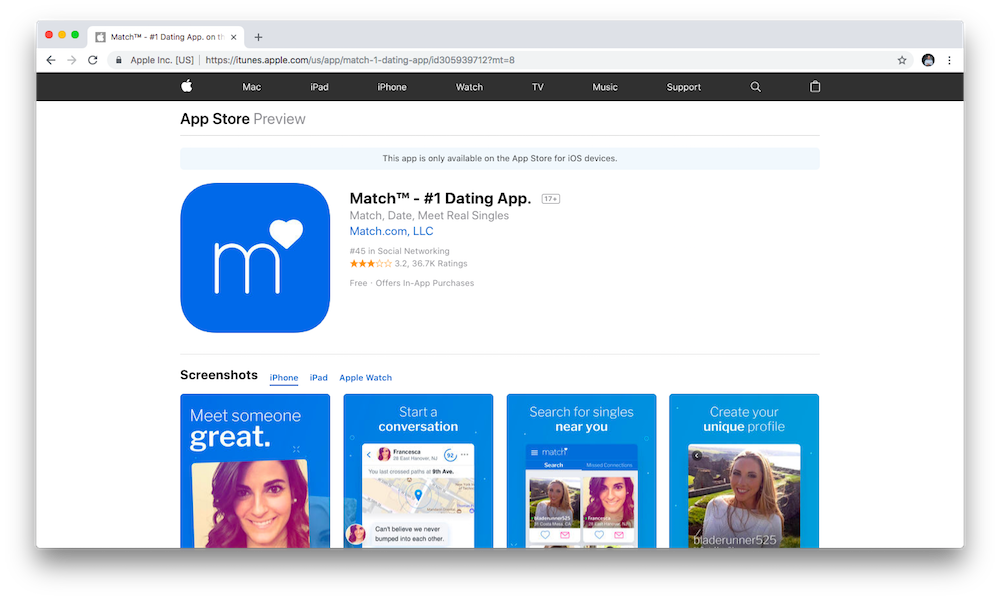 Match may be basing that claim on its decades in existence, because it sure isn’t based on its current rank among monthly active users on Facebook.

By tracking Facebook login tokens — the same ones that got hacked recently — we’re able to see what those looking for love (or something else) turn to for dating apps. In terms of Monthly Active Users for September, Tinder is ranked 7th among all applications. Bumble, despite the explosive growth it has had this year, is 84th. And Match.com is 570 places off from their #1 claim… By ranking at 571st.

These rankings are consistent with the overall trends in the past year for each app, as Tinder outranks Bumble, which leaves Match.com in the dust.

Not only are these apps competing for users, but they were – and still are – at odds with one another in the courtroom.

A brief history of the rocky dating app love/hate triangle

While Match.com was the harbinger of dating apps, it wasn't until 2013 when Sean Rad, Jonathan Badeen, Justin Mateen, Whitney Wolfe Herd, Joe Munoz, Alexa Mateen, and Dinesh Moorjani all came together to change the game forever with Tinder. With the founding of Tinder, the “double opt in” system — swiping for matches — was born. By 2014, it was registering about one billion "swipes" per day, and was expected to be valued at a billion dollars by 2015.

At this point, IAC upped its stake in Tinder, and in May 2017, IAC valued Tinder at $3 billion and merged it with Match. This relationship was going well until August, when some early Tinder employees, including co-founders Justin Mateen and Sean Rad, filed a lawsuit against IAC and Match Group.

The lawsuit alleges that IAC inflated Tinder's expenses to set up an "alternative universe" in which Tinder appeared to be heading for bankruptcy. That led to the $3 billion valuation, which was partially based on IAC/Match Group's projection that Tinder would bring in $454 million in revenue in 2018. As of August 8th, Tinder is on track to bring in more than $800 million this year. The false valuation also saved IAC billions of dollars.

Tinder was founded in the incubator Hatch Labs, which was owned by IAC. There has been a conflict over the ownership structure and founders' equity stakes that date back to the launch of Tinder. This lawsuit is ongoing, but it's not the only one involving Match and Tinder.

Enter Whitney Wolfe Herd, who exited Tinder abruptly in 2014 and filed a lawsuit against it and IAC. She alleges that Justin mateen subjected her to "a barrage of sexist, racist, and otherwise inappropriate comments, emails, and text messages."

Tinder and Wolfe settled out of court. Mateen was suspended — and later reinstated — as Chief Marketing Officer, and that December, she founded Bumble with British entrepreneur Andrey Andreev.

Three years later, Bumble became the fastest growing dating app in America, bringing in $100 million in revenue during 2017. That same year, Wolfe Herd turned down a reported $450 million acquisition offer from the Match Group, the parent company of Match.com, Tinder, and a slew of other dating apps and websites. Match.com followed up with a $1 billion offer. Wolfe Herd turned that down as well.

After being swiped left twice by Bumble, Match.com sued the company in March 2018, accusing it of being a Tinder copycat, claiming patent and trademark infringement, and misusing trade secrets.

Bumble filed a countersuit, seeking $400 million in damages and calling Match's lawsuit "frivolous" and one that aimed to "chill the market for an investment in Bumble."

Will Bumble ever fall under Match.com? Thanks to those lawsuits, it seems that relationship has soured. For now, Bumble and Match have unmatched each other, and it seems like any broken relationship, they’re ready to settle it in court soon.