The ambitious, bold and hungry start their week with The Business of Business!
Markets
9.19.18   7:20 PM Markets

Where Tilray, the marijuana producer that's cleared for a U.S. clinical trial, is positioning itself in Canada

Tilray Inc., the first marijuana producer to go public, is trading at levels near $300 after being approved for a clinical trial in the U.S. Here's who it's hiring and where it distributes in Canada.

Tilray Inc. ($TLRY) broke ground by becoming the first publicly traded company in the cannabis industry. Founded in 2013, Tilray grows, processes and sells marijuana for medical use to patients in Canada, Australia & New Zealand, Europe, and South America. It filed for an IPO this year and appeared on the NASDAQ in July, where after its first day on the market, it was traded at $22.39.

Now, its price is over ten times that, trading at levels as high as $300 on September 19.

This rally was, in part, sparked by the United States clearing the company to import its product from Canada for a clinical trial. Specifically, Tilray's product would be used in a study on essential tremors, a neurological movement disorder that causes parts of a person's body to shake uncontrollably.

Furthermore, legal marijuana sales in Canada begin in less than a month. That will most likely lift all ships in the global cannabis market, which Tilray cites the United Nations as being $250 billion between legal and illegal sales yearly.

While Tilray's stock skyrocketed over the past two weeks, especially today, it has gone on a hiring spree, looking to fill 68 more open positions today than it had on August 30.

Specifically, Tilray is looking to hire manufacturing and trimming technicians for its major processing plants in London, Ontario and Cantanhede, Portugal. These manual labor jobs are tailored towards candidates that can either harvest plants or operating trimming machines to help create finished cannabis products.

There are also four Retail Associate positions open in four locations around Canada, as well as nearly a dozen full-time security officer jobs open for its Ontario plant.

Where Tilray has its roots in Canada 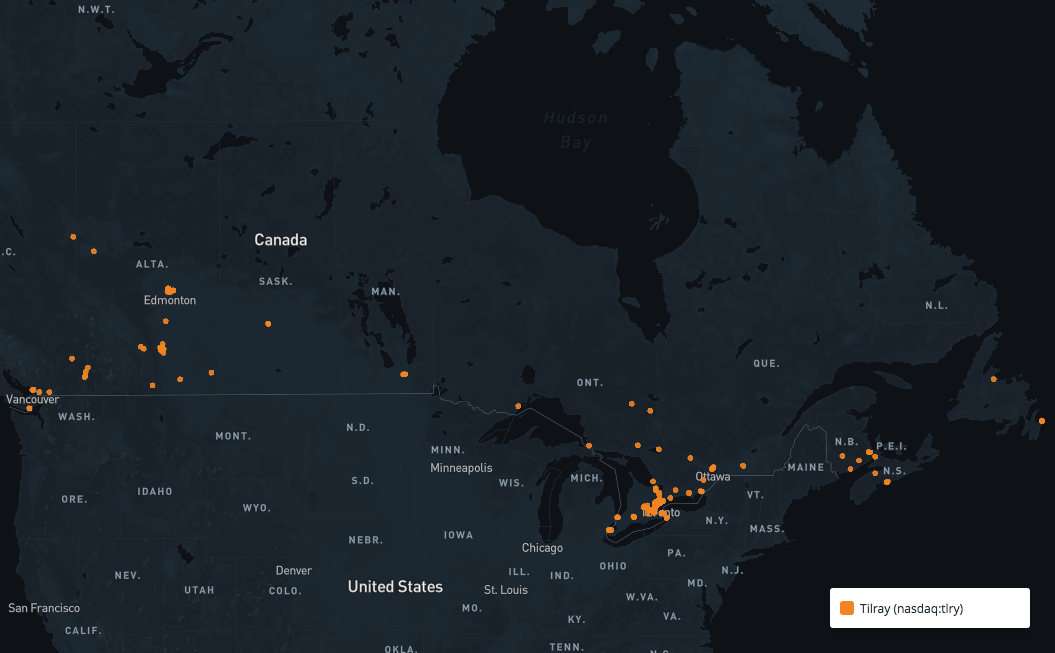 Currently, Tilray has products in 148 licensed medical marijuana dispensaries in Canada spanning from coast-to-coast across nine provinces. Tilray's biggest province in terms of number of dispensaries is Ontario with 86 individual locations, and its biggest city is Calgary, Alberta.

At a glance, it seems obvious that Tilray would focus on dispensaries in Canada's most populated cities. But when looking at the local markets it is stationed in, the dispensaries with Tilray products are more common in cities with higher household median incomes.

In 2015, Calgary had the highest median income out of all major cities in Canada, with the median household income being $104,410. Toronto's median income was pegged at a more modest $78,280, while Edmonton's was $101,870. All of these median incomes are above the Canadian average for that year at $70,366.

Should Tilray make it down to the United States commercially — which would come well after its current clinical trial and a very complex battle for legalization in Washington D.C. — the data infers that it may target areas with high median incomes first. Or at least, high median income neighborhoods in states with legal medicinal and/or recreational marijuana.

This analysis, of course, does not include Tilray's direct online sales that it does on its Canadian website, which on its own could be an entirely different case study. And if it decides to go up against competitors that have already dug roots in the United States, Tilray could be ready to use its online platform — should it also be deemed legal — to be a major player in what could be a massive U.S. market.