The ambitious, bold and hungry start their week with The Business of Business!
Markets
11.9.18   4:59 PM Markets

Vape shops, dialysis centers, and auto parts dot the US-Mexico border. Here's what - and where - they are.

Today, President Donald Trump issued a proclamation titled, "Presidential Proclamation Addressing Mass Migration Through the Southern Border of the United States". The gist of the document, and of much of his talking points as of late about immigration, is that he hopes to shut down the United States' southern border as a "caravan" of refugees from Central America head north.

Of the cities with border crossings, El Paso, TX hosts the most operating businesses, followed by Nogales, AZ and Calexico, CA.

As far as the businesses operating along the border, restaurants via UberEATS ($PRIVATE:UBER) and BiteSquad ($PRIVATE:BITESQUAD) are the most prevalent, followed by Fresenius Kidney Care ($FMS) VUSE Vapor dealers. Other common businesses include vape dealers for VUSE and JUUL, Jiffy Lube, Marriott hotels, and auto-part stores. In addition, 71 public school operate in the border zones.

The top-30 are listed in the chart below:

It's unclear how America's border cities will be affected by the recent focus on the United States' southern borders. Open borders are certainly good for the businesses listed above, but it's unclear how much a complete stop in free movement between the two countries will affect them. There has been little research done on American businesses local to border crossings, but we intend to pay close attention as Trump's proclamation rolls out. 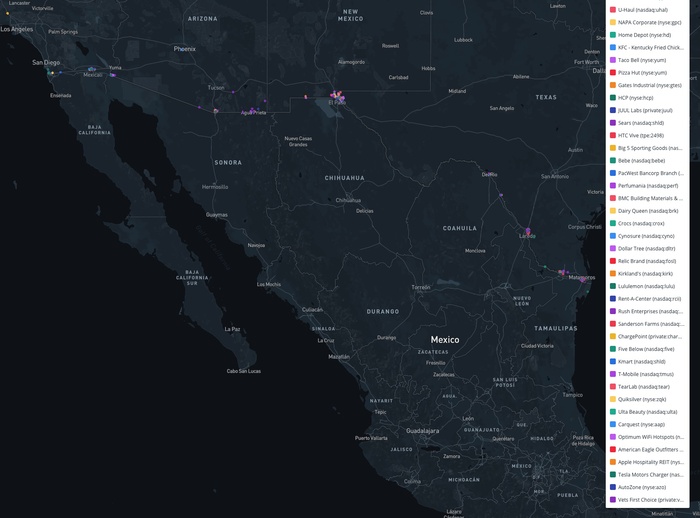