The ambitious, bold and hungry start their week with The Business of Business!
Tech
4.8.19   4:29 PM Tech

At the world's largest retailers, consumers buy a lot of Apple products. But the best-sellers are a bit surprising.

When it comes to popular Apple ($AAPL) products, one usually thinks of iPhone and AirPods. And, at most stores, one would be right. But Walmart ($WMT) keeps a healthy back-catalog of Apple products in its rotation as a way to pass savings on to its customers who are looking for normally-pricey Apple products. These are often B-stock and refurbished products from previous years, clearance bundles.

We've been tracking best sellers at the world's largest retailer since 2015, so we sorted through sales ranks for thousands of pre-paid iPhones, refurb iPads, and even iTunes gift cards to bring you the 20 best-selling Apple products at Walmart since 2015.

The best-selling Apple product at Walmart since 2015 was the 16GB Space Gray iPad Air, sold as a clearance bundle complete with Bluetooth keyboard and case. Its average sales rank over the period of 216 days when it sold was an impressive 2.5 (out of 100). In a somewhat distant second is a "Straight Talk Prepaid Apple iPhone 5S". This pre-paid, contract-free iPhone sold for an average of just $100.47, so it's little wonder that it ranked 11.3 over 125 days.

The Apple product that's sold most at Walmart, however, are the EarPods - the very same headphones that come with iPhones. Over 854 days since 2015, these replacement headphones were top-100 sellers with an average sales rank of 49.0.

The second most-commonly sold Apple product was another pre-paid iPhone 5S, which sold for an average price of $149 over 339 days. 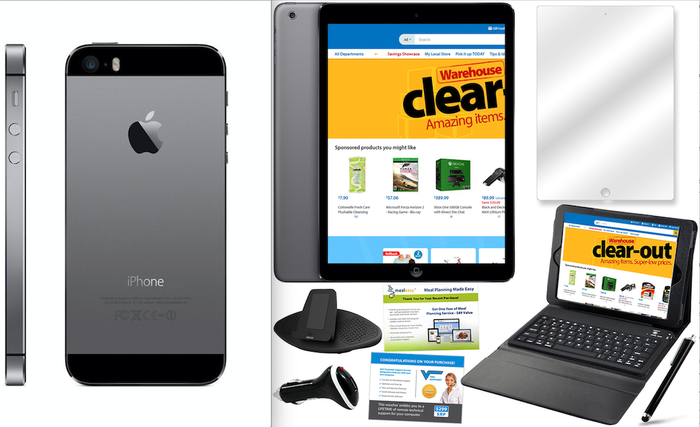