The ambitious, bold and hungry start their week with The Business of Business!
Markets
8.1.18   3:11 PM Markets

The United States of Breakfast: A map of Dennys vs IHOP

How do two of America's most beloved - and ubiquitous - breakfast restaurants compare when it comes to location data?

You know those moments, the ones when you just need a Grand Slam or a Full Stack to take the pain away. And when those moments strike, nothing beats breakfast at one of two of America's largest egg-slinging and pancake-flipping establishments that are open pretty much all the time: Denny's ($DENN) and IHOP ($DIN).

We're not talking Michelin-star dining here, but you know it when you want it, and nothing else will do.

The United States map below shows 3,683 locations for both chains, laid out by chain color in order to illustrate where the two companies have landed their respective store footprints (note: if you'd like to see a larger version, click on the image). 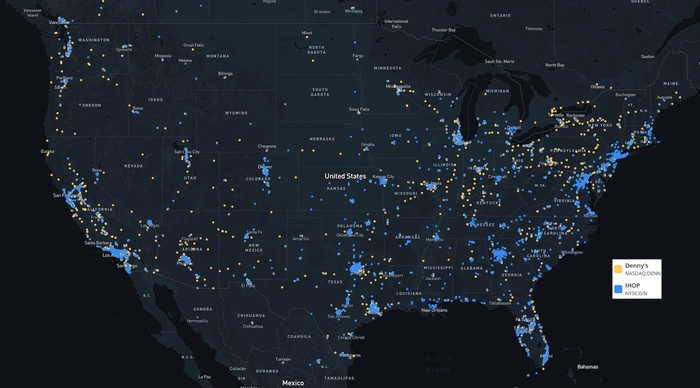 As you can see, both chains tend to open restaurants where the people are: in major cities and along highway routes throughout the United States.

The chart below lists the top-10 cities to get your breakfast on:

If you're a breakfast person, you'll want to head to Houston. That's because of all American cities, Houston has the most Denny's and IHOPs with a whopping 44 locations. San Antonio, TX comes in second with 36. As they say, if you want to go big, head to Texas. Someone said that at some point, at least.

When you think of Denny's and IHOP, you may think of food for the people. That may be true — everyone loves some breakfast at 3am — but when the two chains' locations are laid out along with median income data, it becomes clear that both companies seek out communities that have the disposable income to spend on some pancakes and burgers, as you can see in the map below (click for a larger version).

In fact, the average median income for the communities that have at least one Denny's or IHOP comes in at a very American $56,981.99. That's because according to census data, the median income in the United States is about $59,000.

Bon appétit, and order up!