The ambitious, bold and hungry start their week with The Business of Business!
Markets
1.17.18   12:12 AM Markets

They're cute, they're cuddly, and sales numbers already show that the Porg could be a merchandising win for Disney.

Before the 1980s, movie merchandising was merely an afterthought by studio executives looking to offset budgets. But in 1977, Lucasfilm licensed cups to Burger King for an unheralded movie they were putting out called Star Wars. They then sold merchandising rights for action figures and toys to Kenner, who, by the end of 1978, sold more than 40 million Star Wars figures in the likenesse of Luke Skywalker, Darth Vader, R2D2, and others.

Since then, movie toys and merchandise are, in many cases, bigger business than the movies themselves. Over the lifespan of the Star Wars franchise, Lucasfilm has licensed more than $20 billion worth of goods. One look at Amazon or the toy store aisles and you'll see not just Star Wars merchandise, but also similarly-licensed items from cartoons like Pokémon, videogames like Minecraft, and dozens of TV shows.

Today's toys are an endless array of brand merchandising from media franchises. Chances are, if there's a movie or show, there's a toy for it.

One look at ticket sales and product output from the latest Star Wars movie, The Last Jedi, and it's clear that Disney (who now own Lucasfilm) is looking to cash in on the uber-cute Porg. While these penguin-like birds have sparked divisive among hardcore fans (are they cute? annoying? delicious?), sales of Porg merchandise will be an interesting indicator not just of the movie merchandise market, but also of the public's love (or disdain) for the creatures for not just the recently-passed 2017 holiday season, but for years to come.

We took a quick look at the data, including pulls from Amazon, Best Buy, and Walmart. It turns out that ranking data of the "Funko - Pop! Star Wars Last Jedi Chewbacca with Porg" figure tracked deep enough to begin to tell the story of the Porg as a retail success or failure, particularly at Best Buy. We can see a tentative interest in the figures as trailers and other information about the movie leaked, but once the movie was seen by virtually everyone, there's a noticeable jump in sales rank, moving up almost 1,000 places. Keep in mind, of course, that Best Buy lists all products under the same category, so the little Porg was competing against other holiday and new year favorites like flat-screen TVs and PlayStation 4s. 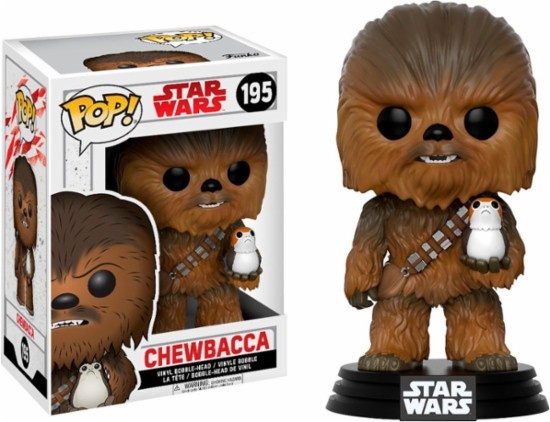