The ambitious, bold and hungry start their week with The Business of Business!
Markets
1.30.18   4:45 PM Markets

The Mall is dead, long live the Mall!

Are multiple chain-store closures a sign of the apocalypse, or just one more step in America's retail evolution?

Some are calling it the Retail Apocalypse. Some simply say we're witnessing the death of brick and mortar. While many malls were full and bustling this past holiday season, others lay nearly empty, shells of their former selves. A wave of anchor tenants had receded: the big box stores, department stores, and grocery stores shuttered by management or Chapter 11 receivers. Smaller stores that attracted shoppers for decades - from American Apparel to Wet Seal - are disappearing, too. What is going on? Is the American mall dying?

In 2017 alone, some of the biggest names in traditional retail closed more than 5,000 stores. Some placed blame on increased competition from e-commerce giant Amazon, which all but destroyed brick and mortar bookstores that couldn't adapt. Now that Amazon sells virtually everything under the sun, it's gunning for the department stores and electronics stores.

Macy’s, J.C. Penney, Sears, and Kmart have announced the closure of hundreds of stores.

A map of department store closings shows the extent of the carnage: 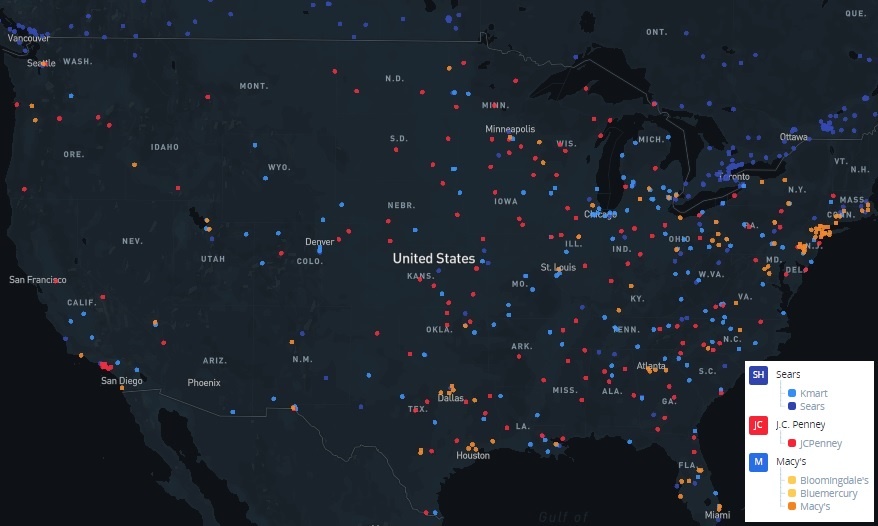 Other mall mainstays are trimming their number of stores in an effort to boost earnings and turn sales slumps around. J.Crew is closing 50 stores. Abercrombie & Fitch and Guess are each shutting down 60 stores. 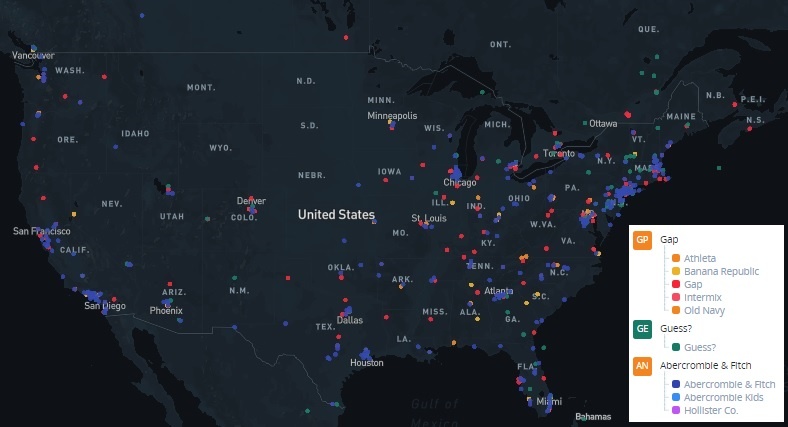 December is a particularly harsh time of year for struggling retailers. Despite the rush of holiday shopping, stores that are winding down operations tend to close in December more than at any other time of the year, a trend that's exacerbated by the holiday pop-up shops that lease in November and then shut down after Christmas.

However, it is troubling when a formerly established retailer calls it quits in the midst of the holiday rush. That happened during the 2017 holiday shopping season when specialty retailer Charming Charlie announced that it was closing 97 of its 375 stores as a part of its Chapter 11 bankruptcy protection.

Survival of the fittest

It's not exclusively carnage, though. The Gap is closing 200 of its Gap and Banana Republic stores, but opening 270 new Old Navy and Athleta stores. Gap’s triage decision to eliminate fading brands while opening more of their growing brands recognizes a shift in what the buying public wants.

The simple truth is that the traditional, multi-level indoor suburban shopping mall is a dying breed. Today’s shoppers are flocking to newer, open-air shopping meccas designed to look like an idyllic American Main Street of decades gone by. Seattle’s University Village is an example of this as is Los Angeles’ Grove and with Burbank’s Americana.

Westfield just completed a $1 billion renovation of its Century City space, drawing upscale tenants including Nordstrom and Lululemon as well as opening the first west-coast outpost of Eataly (formerly Mario Batali’s Eataly), a colossal emporium of Italian food that has been jam-packed with customers since its opening day.

According to retail magazine PYMNTS, Malls are getting more creative in replacing those lost tenants, as well:

When landlords do end up replacing shuttered retailers, they are turning toward a mix of restaurants, lifestyle and specialty retail brands. And, when anchor stores actually do close, mall owner-operator General Growth Properties, for example, opted to replace them with restaurants, grocery stores, gyms, boutique retailers and entertainment options.

The survival of today’s shopping malls and complexes depends on offering shoppers an experience rather than just retail therapy. Other retail manifestations are already doing something similar. Movie theatres with in-seat food and beverage service are becoming common.

Family movie nights on a central lawn, concerts under the stars, culinary pop ups, weekend yoga workshops - all of these are growing trends at urban shopping malls that the large, surburban indoor malls have not yet embraced.

With the data at hand, we know December can be the highest of highs and lowest of lows for retailers. The closure of Charming Charlie, Kmart stores, and others reveals that it isn’t always the merriest of seasons. The question is: are we going to see more large retailers hit the skids in the first quarter of 2018 - and what will that say about the U.S. economy overall?