The ambitious, bold and hungry start their week with The Business of Business!
People
1.22.18   5:04 PM People

From giant defense contractors to small businesses, the government shutdown is bringing on a bumpy ride. Fasten your seatbelts, folks!

Who gets hurt by a government shutdown? The usual list includes furloughed government employees, people who had been trying to sign up for Social Security, and members of the military (they'll keep working, but won't get paid, and schools and facilities for their families on military bases are shuttered). But another big hit goes to government contractors, including the defense contractors who would otherwise be happy with a quantum increase in defense spending.

Moody’s noted that the economy took a more than $20 billion hit [In the 2013 shutdown], while the loss in GDP has been estimated up to 0.5 percent

As you can see from Thinknum's tracking of total Federal contract outlays, companies are reluctant to commit to contracts if there is uncertainty about getting paid, and agencies are less likely to put out tenders when they have no idea whether or not they'll have a budget. The total dollar value of Federal contracts issued over the past couple of quarters has already been a shadow of the Q1 and Q2 numbers: 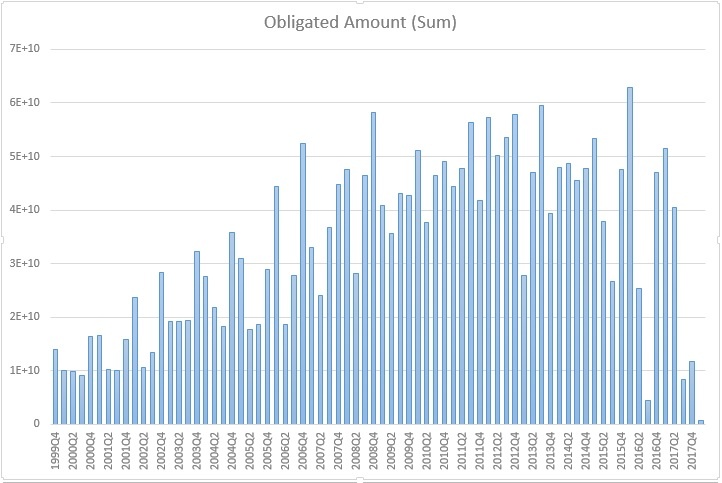 The stranglehold had already set in long before the shutdown... although to be fair, there have been shutdown alarms and stopgap spending bills almost from the start of the administration, and it's been a constant drumbeat since September.

And President Trump hasn't exactly helped with his tweets calling for a "good shutdown".

either elect more Republican Senators in 2018 or change the rules now to 51%. Our country needs a good "shutdown" in September to fix mess! — Donald J. Trump (@realDonaldTrump) May 2, 2017

Zooming in, we can see that the trickle of contracts has slowed down even further, until the past few weeks it's just been a shadow of its former shadow.

What kind of drag is all this having on economic activity? In the last shutdown, the biggest impact was on small businesses - companies that don't have the flexibility with cashflow of a Northrop Grumman or Boeing. While big firms can wait out the freeze, small firms get frostbite.

Brookings, the Washington, D.C. think tank,  says in a report on the 2013 shutdown that “Moody’s noted that the economy took a more than $20 billion hit, while the loss in GDP has been estimated up to 0.5 percent. OMB/Bureau of Labor Statistics estimate that the shutdown limited the creation of 120,000 jobs. Beyond these costs, specific policy areas that were hit hard. Businesses depend on the Social Security Administration and Internal Revenue Service to check the accuracy and integrity of documentation including social security numbers for a variety of business services. The [OMB] report notes that ‘two weeks into the shutdown, the Internal Revenue Service (IRS) had an inventory of 1.2 million verification requests that could not be processed, potentially delaying approval of mortgages and other loans.’”

And that's on top of economic disruptions already occruring because of major changes to the tax code, to health care laws, and to immigration.

Fasten your seatbelts, folks. It's going to be a bumpy year.