The ambitious, bold and hungry start their week with The Business of Business!
Markets
1.22.19   3:44 PM Markets

The decline of Marks and Spencer: How the storied UK retail giant failed to keep up

A cookie-cutter holiday hiring pattern, declining profits, and a sharp decline in store locations. Is Marks and Spencer the next victim of the retail apocalypse?

For more than a century, the UK retail giant Marks and Spencer has been a mainstay of the chicest shopping districts across the UK. At one point, Marks and Spencer was so ubiquitous that it made many appearances in film and literature. Now, a downturn in sales and a wave of store closures is changing the face of shopping in cities and towns across England and Ireland. Just recently, the department store announced another wave of store closures—17 in total—that put more than 1,000 jobs at risk.

At the time of the announcement of the closures, Sacha Berendji, the retail, operations, and property director said:

“Proposing to close stores is never easy, for our colleagues, customers or the local community, but it is vital for the future of M&S.”

We’ve written at length on the demise of traditional retail in favor of the convenience of online shopping. Is Marks and Spencer falling prey to the wave of retail apocalypse that has claimed Sears ($SHLD), Kmart, Toys R Us ($PRIVATE:PRIV_TOYSRUS), and several others?

Marks and Spencer was founded in 1884 by Michael Marks and Thomas Spencer in Leeds, United Kingdom. The retail chain became known in the early 20th century for its policy of only selling British-made goods.

In 1998, it became the first British retailer to make a pre-tax profit of over 1 billion pounds. This was the height of its performance. Almost immediately after attaining this goal, the company went into a sudden slump that continues to this day.

The images below show the concentration of Marks and Spencer stores at its peak both around the world and in the United Kingdom. (Subscribers can get this location data here) 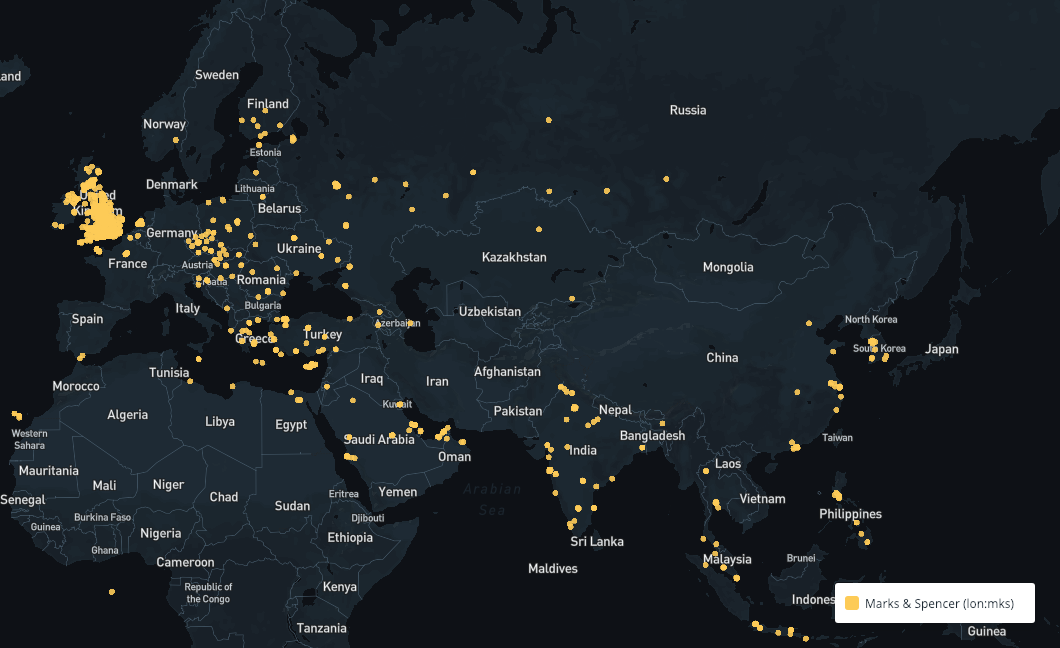 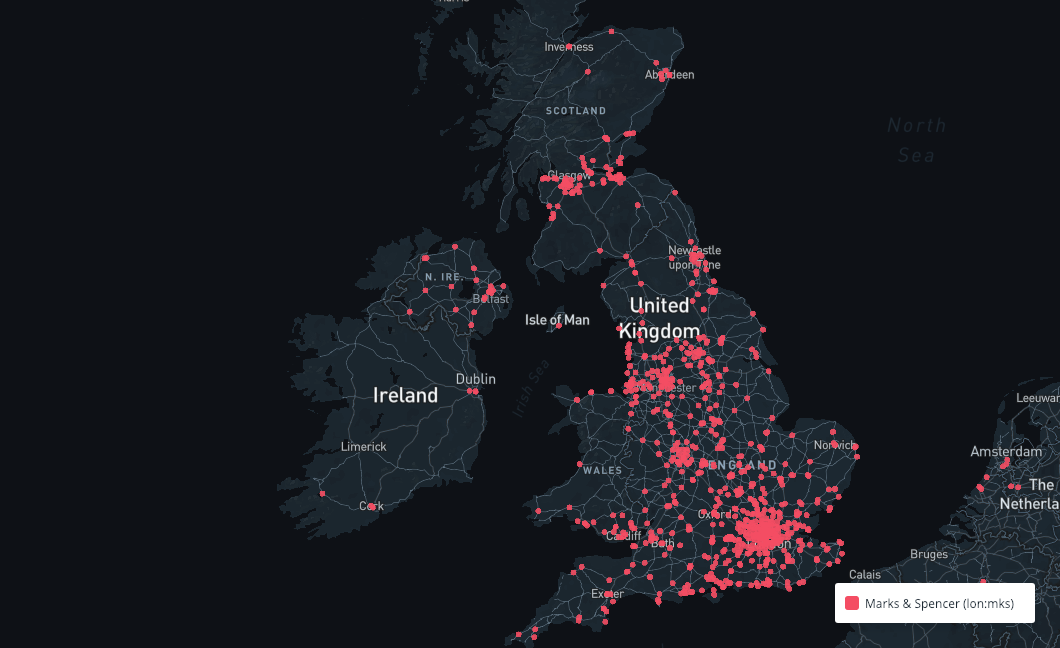 The decline can be tied to a number of things, especially in those early days before e-commerce was a factor.

Poor profit margins and the erosion of the loyalty of its customer base started to chip away at the business in the late 1990s. The cost of using British suppliers became too expensive. M&S’s switch to overseas suppliers came too late and undermined an important part of its appeal to customers. Additionally, Marks and Spencer did not take any credit or debit cards except for its own store card until 2001.

The map below shows the concentration of Marks and Spencer stores now. 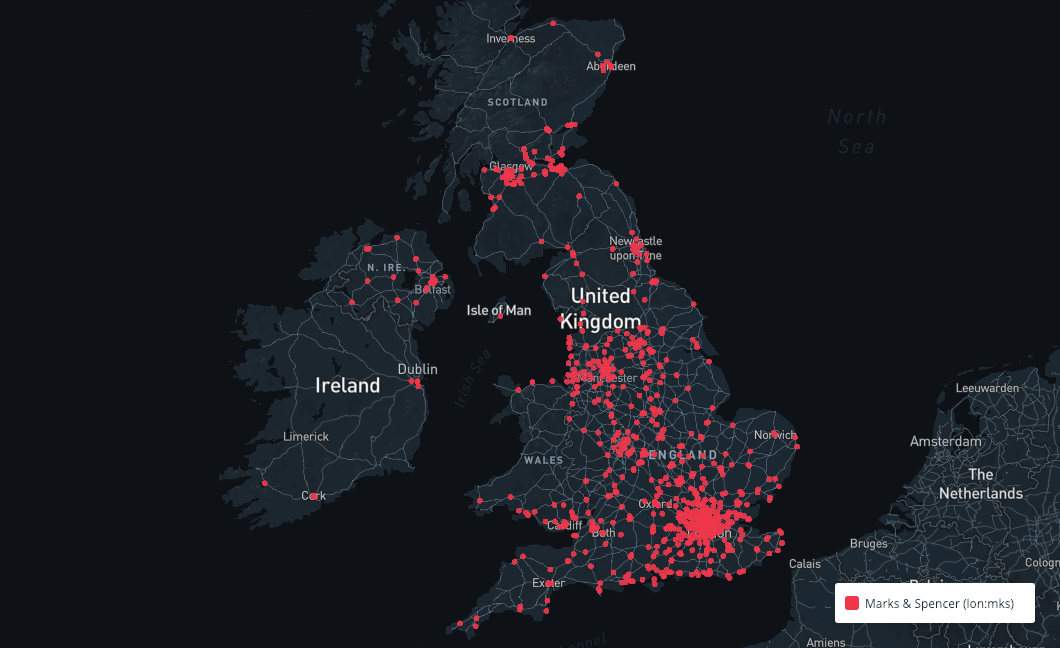 These factors started the decline of Marks and Spencer at the same time that ecommerce was taking over.

By 2001, just three years after hitting more than one billion pounds in profit, Marks and Spencer’s profit fell to 145 million pounds. And it has just gotten worse from there. In May 2018, the company confirmed that more than 100 stores will be closed by 2022.

Marks and Spencer’s retreat from many towns and cities in the UK comes as those places are dealing with fewer customers due to the shift to online shopping. The number of shops, restaurants and pubs that are vacant in the UK increased a ton with the closure of 24,205 businesses in these categories in 3,000 towns, cities, retail parks and shopping centers in the UK during the first six months of 2018.

The closures of Marks and Spencer’s brick and mortar locations is part of the company’s switch to its online business, or specifically, it will shift one third of its business to its website. And, according to its hiring data, it will affect UK retail jobs, especially around the holiday season.

In looking at recent hiring data for the retailer, there is a noted trend towards an uptick in hiring during the lead up to the holiday shopping season. This is the case for most retailers, but for Marks and Spencer, it is even more severe.

For instance, in November 2018, M&S was hiring 995 Customer Assistant-Sales floor positions. In January, that number dropped to just 70 job openings across all stores.  M&S was hiring 239 Store Warehouse workers in November and just 16 in January. The chart below shows the peaks and valleys in hiring across the company.

On top of this post-holiday season decline, more than 300 people have lost their jobs in the M&S store closures. About 80% of this workforce have been assigned to other stores—but for how long will they stay if a third of the company's business goes online?

Shifting a third of its business online would impact the number of stores and workers needed at locations, which begs the question if this will be enough to save the vernable retailer. Sales in the clothing and home goods sector of Marks and Spencer declined by 2.4% over the Christmas holiday period. Sales in the company’s food division were down 2.1%.

One has to wonder, if shoppers had shopped in brick and mortar stores rather than in less expansive online retailers, would Marks and Spencer and other retailers be facing the dire situation they are now?