The ambitious, bold and hungry start their week with The Business of Business!
Markets
1.8.19   3:14 PM Markets

This grocer-supplier could control the majority of Long Island's supermarkets

Should Stop & Shop bring in their own supplier to its soon-to-be acquired King Kullen stores on Long Island, C&S Wholesale Grocers, one of the largest private companies in the U.S. will only get bigger.

On Long Island, New York, an area that has almost 1% of the country's population, a major deal confirmed over the weekend saw the last family-owned supermarket chain bought out by an international supermarket conglomerate. This begins a new chapter not only for the whole community, but also what could be the global landscape of who provides food in America.

The Express Lane: What the deal means for Stop & Shop

The deal will see King Kullen ($PRIVATE:PRIV_KINGKULLEN) give all of its stores — 32 King Kullens and 5 organic specialty markets known as Wild by Nature — to Stop & Shop, owned by Dutch retail giant Ahold Delhaize ($DEG). 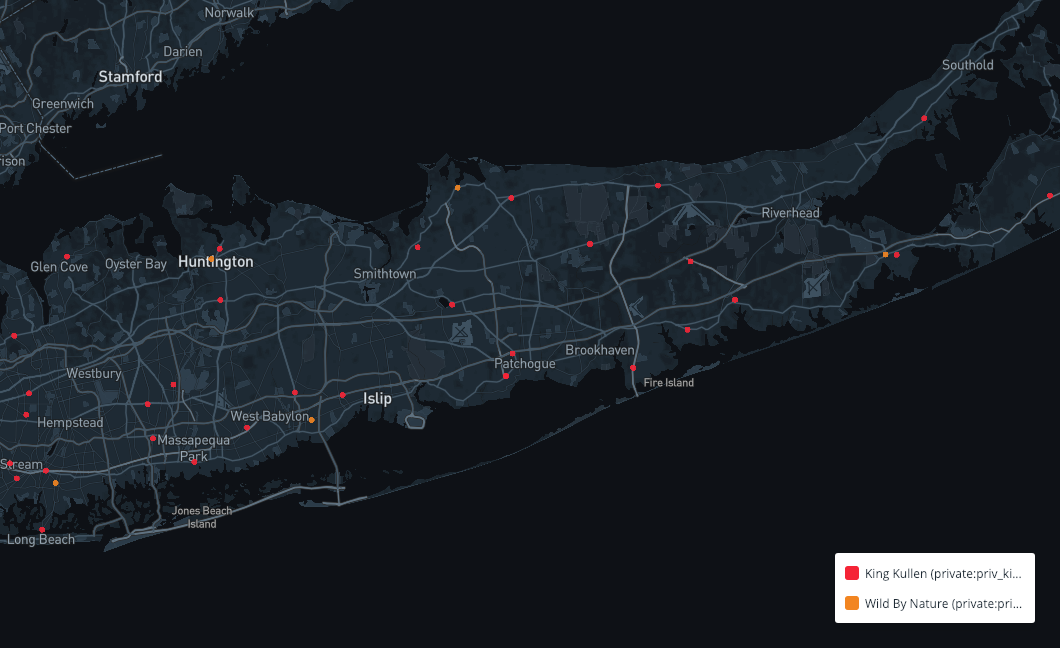 Stop & Shop already has a large presence on Long Island; in the beginning of 2017, there were 50 Stop & Shops serving customers from Hempstead to the Hamptons. 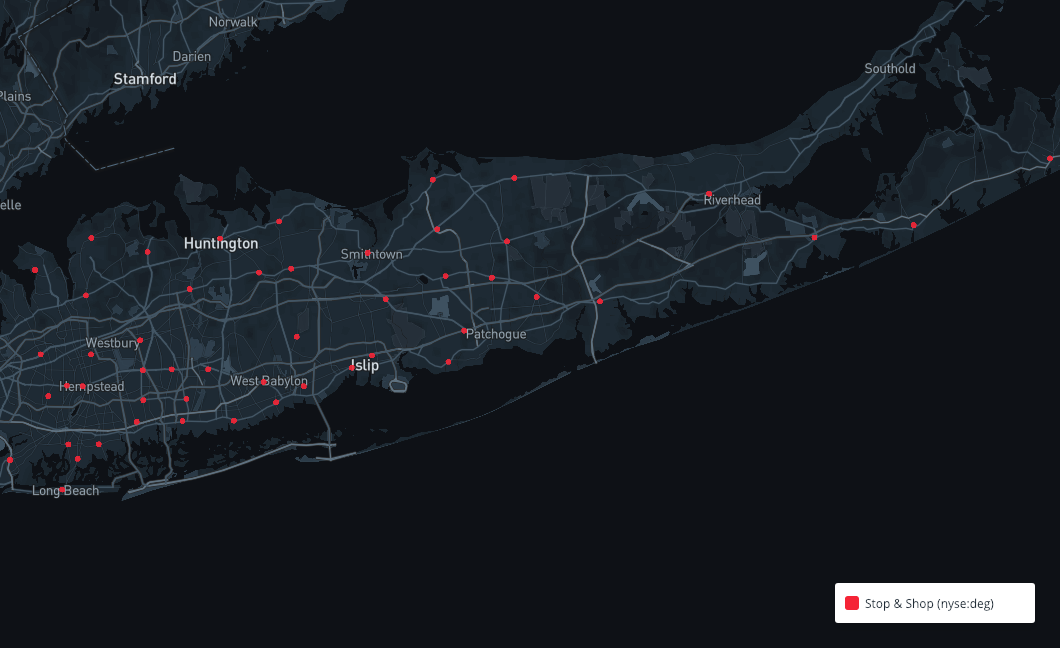 It isn't as obvious to see why Stop & Shop would want to acquire King Kullen, unless both of the supermarkets' footprints are layered onto the same map. 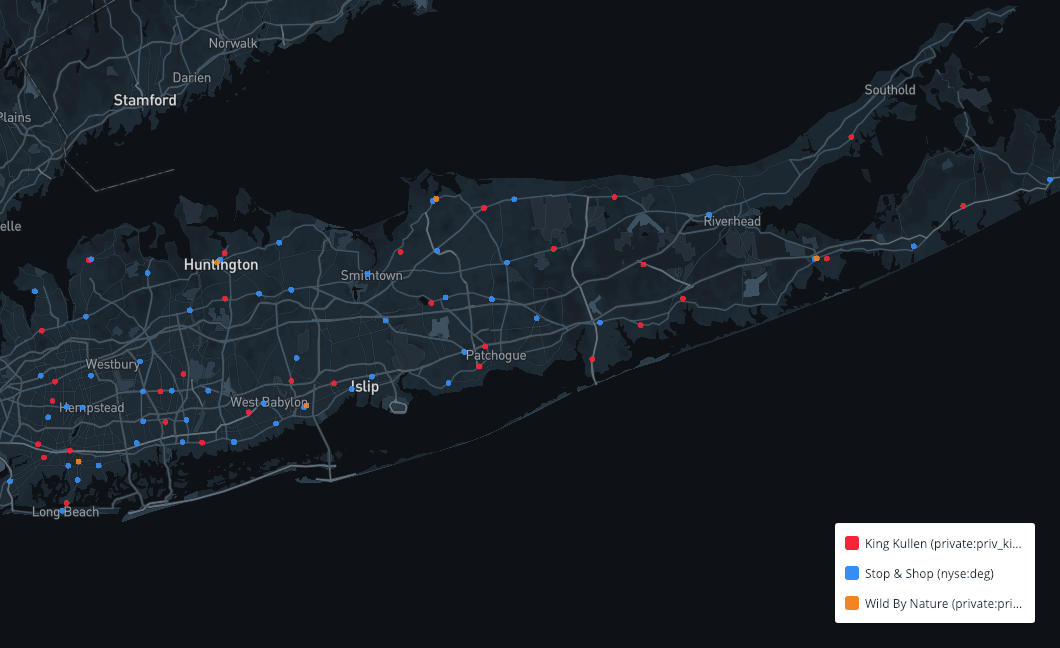 Bringing in King Kullen will give Stop & Shop a strategic advantage in covering more neighborhoods around the island. This includes the southwest corner of LI (Valley Stream), the North Fork (Cutchogue), and in the Hamptons (Bridgehampton).

In fact, after the deal is done (and if Stop & Shop decides not to close any stores), the longest point-to-point distance between Stop & Stops would be under 10 miles.

Outside of Oyster Bay in northern Nassau County, most of these stores that are far apart from each other are in Suffolk County, where the population density is drastically lower than that of Nassau.

Essentially, one wanted to avoid a Stop & Shop, one would have to be at the end of the Island in Montauk, or well-tucked away from a major road in Suffolk County. Of course, it would be odd to see Stop & Shop keep a few locations around when they are so close to one of their existing stores. Namely, clusters of stores in Glen Cove, Huntington, East Setauket, and in the Hampton Bays. 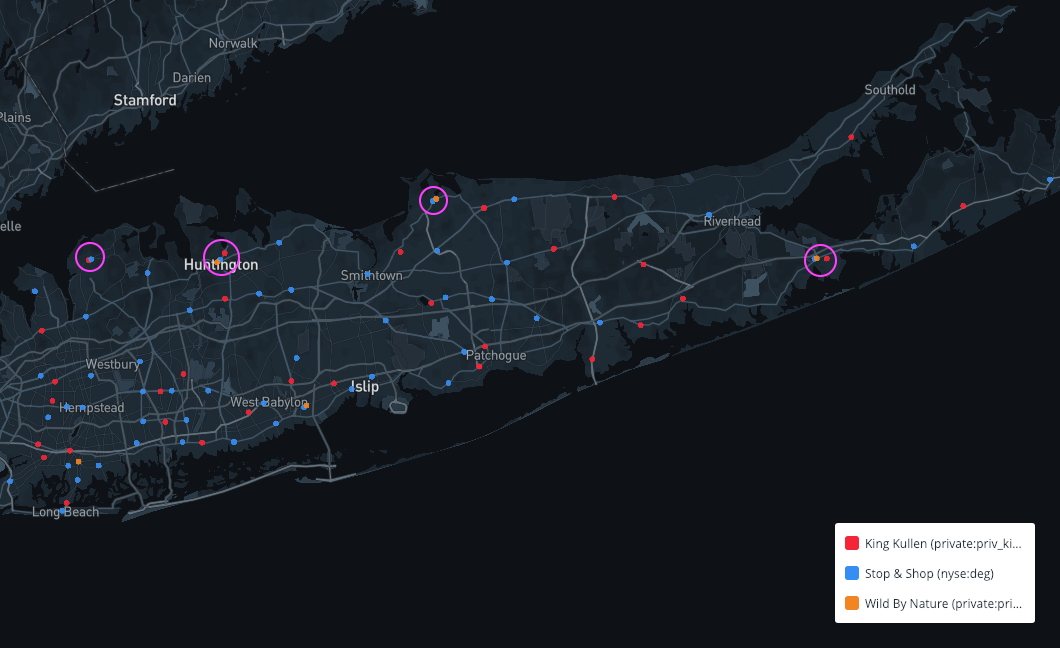 In a region where German discount grocer LIDL ($PRIVATE:PRIV_LIDL), who just bought out almost all the Best Markets on Long Island and beyond, and Whole Foods by Amazon ($AMZN) are ramping up for an arms race via food fight, this move by Ahold Delhaize puts Stop & Shop in a position to compete against its peers in the supermarket space.

The real winner of the deal: C&S Wholesale Grocers

Beneath the surface of this deal lies an even bigger beneficiary: C&S Wholesale Grocers ($PRIVATE:CSWG), the supplier for Stop & Shop and several other grocers on Long Island. Should Stop & Shop bring in their own distributor — the full details of its King Kullen deal aren't out yet and supplier changeover is expected, but not certain —it will give C&S 37 new grocery stores to supply on Long Island.

Not only does C&S supply Stop & Shop, it also provides wholesale groceries for Target ($TGT). It also owns the Best Yet grocery brand, which supplies all Best Markets that were just bought out by LIDL... And it might even keep that supply chain rolling temporarily, according to industry insiders.

But even just with Stop & Shop, the King Kullens-turned-Stop & Shops and Target, there will be over 100 grocery stores with C&S as the main supplier. 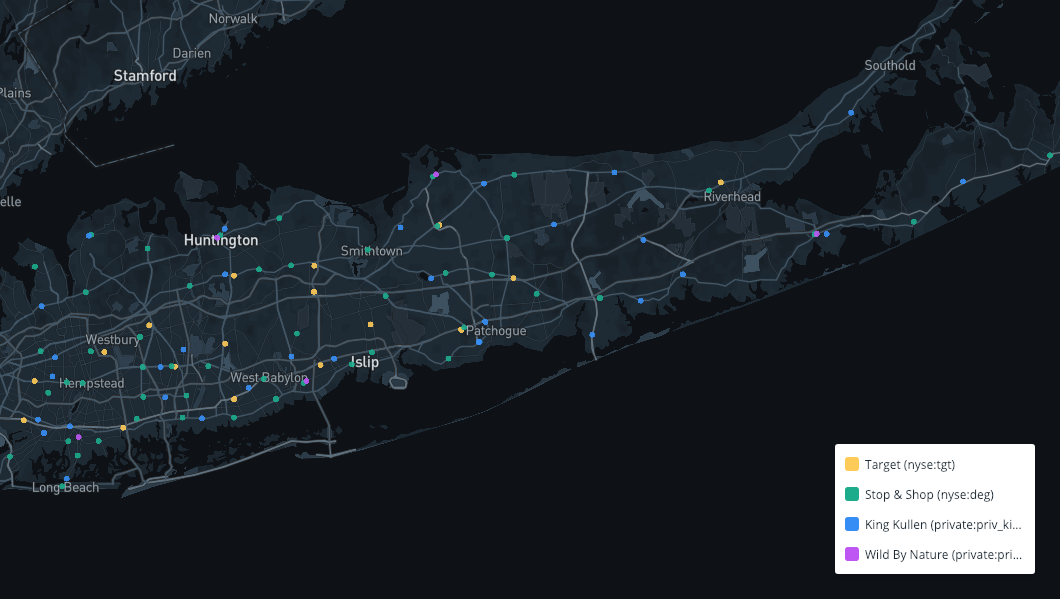 This private company that made $30 billion in 2017 might be poised for a bigger year this year should all chips fall in their favor (or shopping cart), as they would have over half of the Long Island market on grocery stores, which has the likes of Whole Foods (3), ALDI (6), LIDL (24 through Best Market), Key Food ($PRIVATE:KEYFOOD) (22) and even Walmart ($WMT) (14) around.

If C&S takes over these new Stop & Shops, it also means that Bozzuto's ($PRIVATE:BOZZUTOSINC.), the wholesale supplier of King Kullen, would effectively lose a major customer. They still have supermarket chain IGA to distribute to, but without question, losing the King Kullens-turned-Stop & Shops aren't good for business.

With 2,862,467 people estimated to be living on Long Island — that's 14.65% of New York state .88% of the whole country — C&S would effectively become the main company responsible for putting just under a million dinners on tables by proxy in one of the wealthiest parts of the country.

In other words, C&S, rated by Forbes as the 10th largest privately-held company in the U.S., is about to get a major sweep of the supermarket game on Long Island, and it could make them an even more valuable company in the United States.