One of the more interesting things that we track here at Thinknum is online engagement and traction. It’s especially interesting when we have months - or years - of data to show how a particular digital property, commerce operation, or social platform is trending. In the latter case, we’ve been tracking dating site traction for some time now, including login and other data. It’s a good way for us to understand where the action is, if you will.

Enter SpeedDate, a monetized dating site that, according to SEC Filings, is one of Match.com's ($MTCH) 45 properties (along with Tinder, Meetic, and OkCupid), which was spun off in a 2015 IPO by media conglomerate IAC. SpeedDate.com purports on its homepage to have anywhere from 2,944 to 5,000 “Singles Online Now!” That’s an impressive number, for sure, and one would think that would be evidence enough that the personals would not just be legit, but also up-to-date and fresh.

Or perhaps it’s because they lie?

When our engineers took a deeper look at SpeedDate.com to figure out how we could track activity - after all, 3,297 Singles Online Now is a lot, and we should be tracking this rising star of digital dating - we found something curious in their header files. 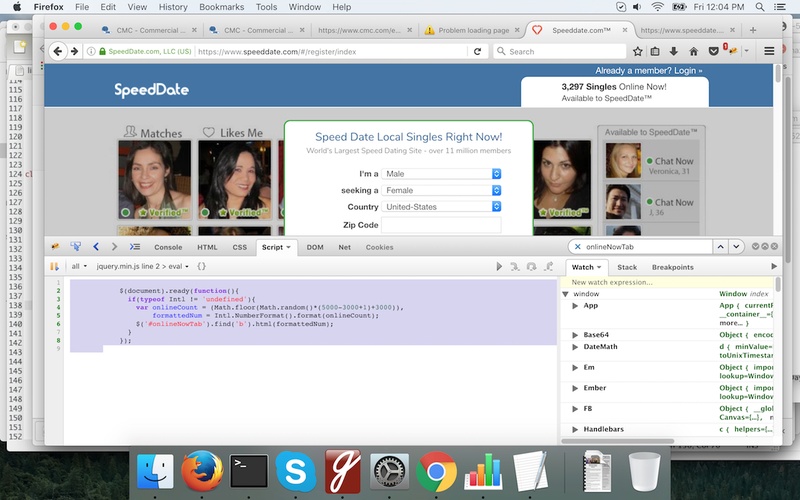 That’s right, this Match.com company dating site uses a random number generator to pick a number between 2-5,000 (4,491 the last time we reloaded) to simply lie to curious singles about how many people are actively looking for dates.

You may think this isn’t a big deal, but in an environment in which dating sites are exceedingly difficult to navigate, difficult to use, and sketchy on details, a company as big at Match shouldn’t be commiting a sin as fundamental as making up its usage numbers.

Perhaps SpeedDate.com is just a placeholder for something bigger. Maybe it’s a relic that Match is no longer feeding. That said, it still entices hapless singles to sign up, give out personal data, and get matched up with users that either don’t exist, or haven’t been using the site in years.

Oh - and to “verify your profile” you need to enter credit card information and get billed $0.99. After all, there are thousands of singles waiting to meet you, right?

That said, we're not sure what's up with Speeddate.com these days, or if they're even still active as a business. In 2008, they came under fire for some Facebook login shenanigans that got them banned from the social network. Regardless, their site is active, they're accepting signups, and they seem to be taking people's hard-earned cash even when the possibility of actually meeting your next snookums is remote.