Sony is killing PlayStation Vue on January 30, its successor is officially YouTube TV

If Sony had a better "view" of the industry, maybe this could be avoided.

This decade has had an incredibly rough start if you're a fan of things living. Mr. Peanut passed away, Fairway Market filed for bankruptcy, and now PS Vue is ending on Thursday. What will die next? When will this madness end?

Sony ($SNE) has decided to channel all of its energy and focus on the PlayStation 5's release this holiday and failed to find a buyer for its live TV streaming service PlayStation Vue. So, the service will officially terminate on January 30.

In its place will be a number of third-party competitors that Sony refused to allow on its consoles, which include the more popular YouTube TV from Google ($GOOG), Sling TV from Dish Network ($DISH), and Hulu from whoever still owns Hulu. Disney ($DIS) I think has a majority ownership in that? Boy, when will that be absorbed into Disney+, right?

“Unfortunately, the highly competitive pay-TV industry, with expensive content and network deals, has been slower to change than we expected. Because of this, we have decided to remain focused on our core gaming business.” - John Kodera, Deputy President of Sony Interactive Entertainment

Normally we would offer some sort of percentage to show the increase or decrease in a dataset, to contextualize the graph. But Sony stopped listing jobs about PS Vue in September. The last position related to Vue was for legal counsel. Wonder why that might have been.

So when the Deputy President of SIE says they're remaining focused on the core gaming business, you might as well say that for every other branch of Sony. The PlayStation is the reason this company is afloat, and it's the most successful thing to happen to them since the Walkman and first two Spider-Man films. Otherwise, Sony should just get out of every other business.

For instance, we've never seen a company recommend customers go to a direct competitor like this before. So if you gave Sony any money before, just give it to Google now! That's officially Sony's stance, which is beyond bizarre to me. Anything to keep you on the PlayStation ecosystem, and keep that credit card info saved, right? 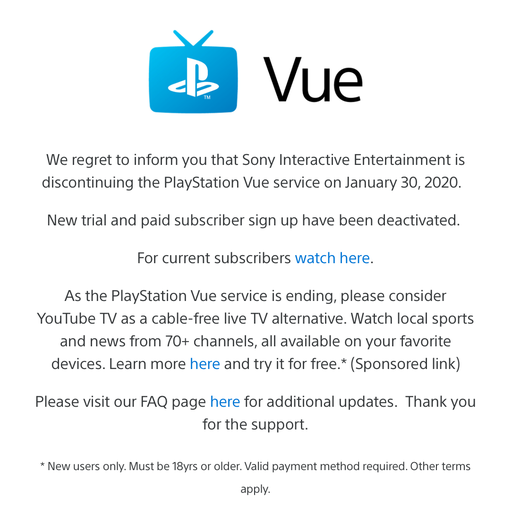 When we looked into the other options people have for live TV, there hasn't been any sort of rush to find a replacement yet (buy our demo to play around in our data more if you so choose). There has been no real spike in mentions about the competitors since the Vue news broke. Maybe subscribers are waiting until the subscription lapses to then realize they need to find a new way to watch live TV? Or maybe all those Vue users are chord cutters and will just move on with their lives. Who knows.