The ambitious, bold and hungry start their week with The Business of Business!
People
3.8.18   5:00 PM People

Snap may be laying off 100 engineers, but hiring data shows they're being replaced.

Reports that the company is shedding 100 engineers may be a sign of contraction, but 159 openings as of today says otherwise.

Snap ($SNAP), the disappearing-message-chat app that has become a $22 billion publicly-traded company that's in a process of reinventing itself as Instagram and others chase its tail, recently announced that it would be laying off about 100 people. According the CNBC, these layoffs would consist largely of engineers.

This is the first time Snap has laid off engineers, and it's a sign that the company's change in strategy runs deeper than simple marketing. The company recently redesigned its app (much to the chagrin of many of its users) and is rumored to be gearing up to release another iteration of its Spectacle video glasses.

Despite the layoffs, however, the company is still hiring. This is probably a sign, then, that these layoffs are more the result of a change in company focus and strategy than contraction. In fact, as of today, the company has 159 job openings listed on its site.

The number-one category they're looking to fill? Engineering, by a long shot, followed by Sales & Marketing in a distant second. 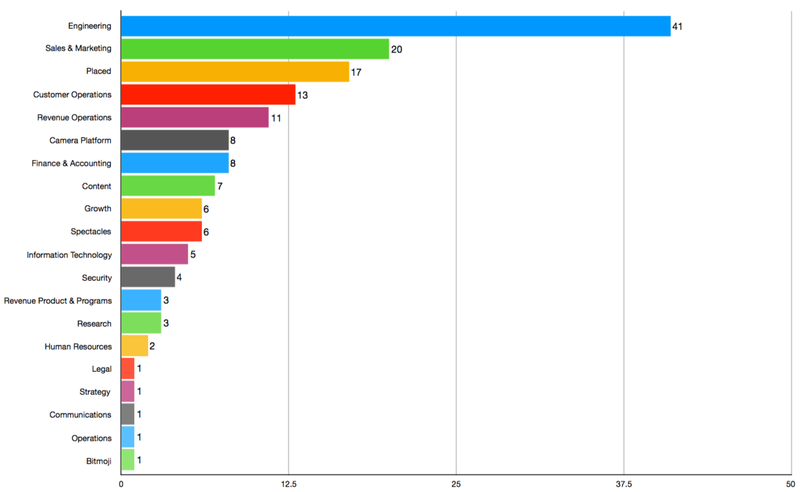 In fact, Snap engineering hiring has been on an uptick for a long time, especially since the new year when, one could surmise, company higher-ups made some tough decisions about where they'd be going from a product and engineering standpoint.

In other words, it looks like Snap is looking to replace many of its engineers with... engineers. Just of a different sort.