Is Snap serious about gaming? Job listings and absence from E3 raise questions.

Snap Games is building up a team, but is it enough to scale against a saturated market? And where the heck was it at E3 2019?

Snap Inc. ($SNAP) made waves when it announced a gaming platform two months ago, which preceded a 4% gain on the company's stock. Then, a week before E3, it launched a somewhat-anticipated battle royale game — Tiny Royale — that Zynga ($ZNGA) of FarmVille fame created exclusively for the Snap Games platform.

There is still plenty of skepticism surrounding Snap Games, especially when taking a look at what its competitors — both in the gaming industry and tech industry — are doing. But despite a zero public presence at E3, it seems that it's answering the call to action and building up its team, according to job listings data.

Above is the chart of job openings over time for positions on Snap Inc.'s official job listings page that contain variations of the word "Game" in the job description. At first glance, the jobs aren't specifically tailored towards Snap Games, and when we covered the platform before, nothing obvious stood out on what Snap Inc. was doing.

However, upon closer inspection — and a bit more due diligence on our part — we began to see a few signs of life within "Preferred Qualifications." 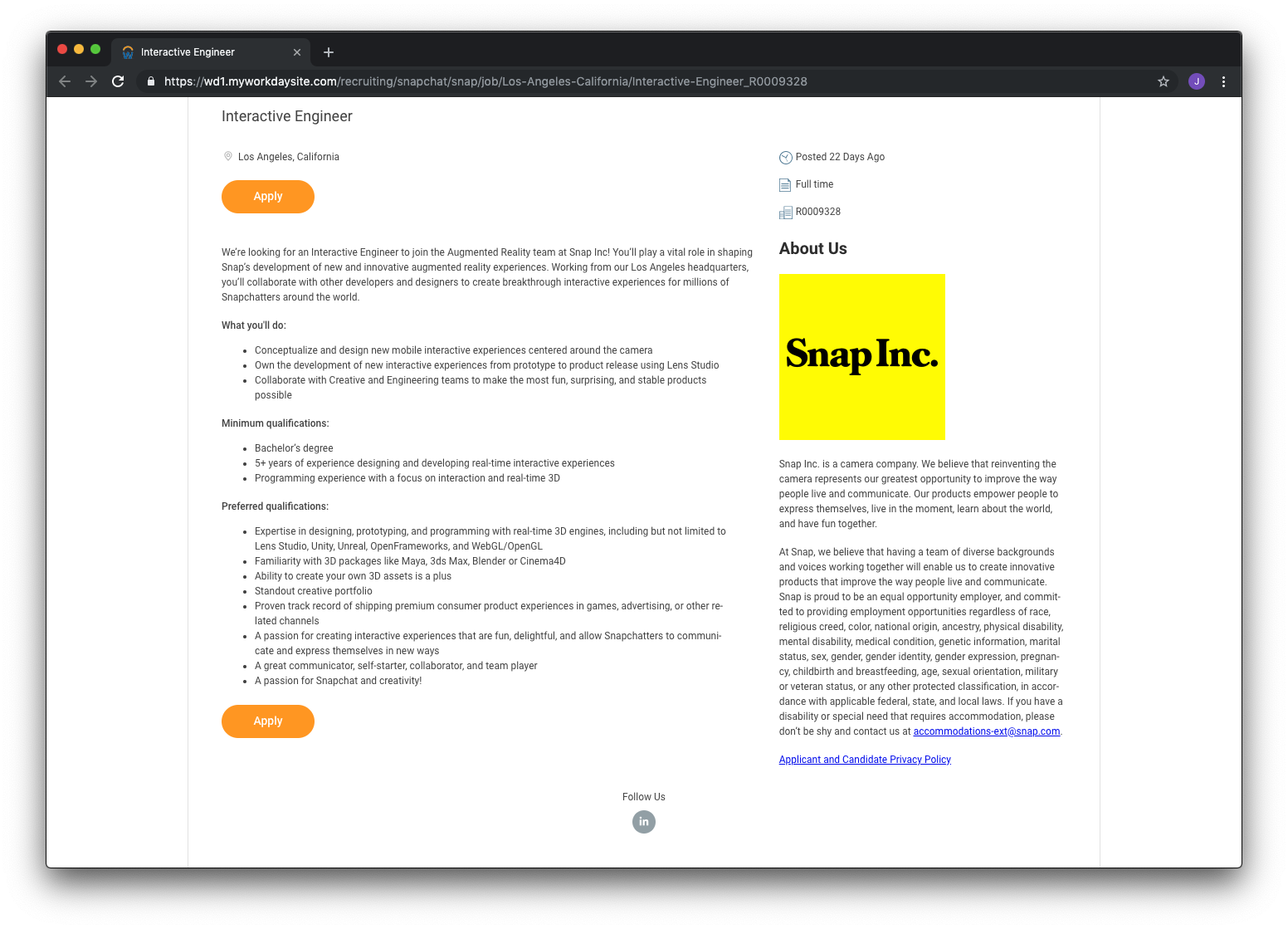 The above job opening — one of the few active ones at the time of writing — gives a few interesting hints to something in the works. Namely the following:

Unreal is a gaming engine that's helped studios big and small produce games. Most notably, it's the engine that Epic Games ($PRIVATE:EPICGAMES) — yes, the Fortnite company — owns and licenses out to studios to make those games.

While the job postings aren't specifically screaming "AAA gaming studio" inside of Snap Inc., it does appear that Snap Games is building up somewhat of a team for game development. And, in looking at all the job openings it had that contains these keywords, it also built up a team of people who are landing partnerships with studios like the aforementioned Zynga.

However, Epic just bought out video chat app Houseparty, a direct competitor to Snap Inc. “By teaming up, we can build even more fun, shared experiences than what could be achieved alone," said Tim Sweeney, founder and CEO of Epic Games in a blog post.

This all begs the question of how much Snap Games is scaling up to an industry that's rapidly blending tech companies and games together.

Just take a look at who is at E3 this year: Google ($GOOG) made a big deal of its Stadia Cloud gaming platform. Facebook ($FB) has a pretty big booth in the South Hall right next to AAA developer Bethesda. Big tech is clearly moving into the gaming space, especially when plenty of the old guards are deciding to skip E3 this year.

Although those legacy names are missed, they are still involved without the big booths and with no real backlash. One of major note is Sony ($SNE), but even they are getting exposure at the event through other presentations, such as dozens of game developers putting out their titles on Sony's consoles, and were trending on social media during the event anyways.

But has there been a killer app for Snap Games announced at E3? Not to our knowledge. Could they be on the guest lists of the swanky afterparties? Possibly, but it's like shooting a selfie in the dark by predicting what's happening at those anyways.

With how many competitors are out there — we didn't even mention Apple ($AAPL), which has its Arcade coming out soon and currently has games within iMessage — Snap Inc. is still fighting for relevancy in a saturated market. And in missing out on E3, we're left wondering how successful its "Tiny Royale" and other games will be, as well as what its in-house team decides to do.