The ambitious, bold and hungry start their week with The Business of Business!
Features
4.27.22   8:59 PM Features

Skolkovo: The story of Russia’s failed attempt to build its own Silicon Valley

Russia learned the hard way that corruption and authoritarianism aren’t conducive to a thriving tech ecosystem.

The late 2000s gave Russians reasons for cautious optimism about the future of their country. Despite an economic downturn caused by the global financial crisis, things were looking up in its political sphere. Vladimir Putin gave up the presidency after serving two terms and was replaced by the seemingly more liberal Dmitry Medvedev.

Medvedev projected an image of a young, Western-oriented technocrat with passion for digital technology. He was an active Twitter user and didn’t hide his admiration for Apple products, famously receiving a brand new iPhone 4 as a personal gift from Steve Jobs.

He understood that the main determinants of a country’s wealth in the digital age were its ability to attract human capital and build a flourishing technology sector. He seemed determined to modernize Russia’s economy and break it out of its resource curse (fuels were more than 60% of Russia’s exports).

In 2010, he signed a law establishing Russia’s own Silicon Valley, about a 20-minute drive from the Kremlin. The government planned to spend $4 billion on the development of Skolkovo Innovation Center, a sprawling high technology hub to be built on a previously disused plot of land. It was to become a setting for cutting-edge research and a startup ecosystem across five priority areas: energy efficiency, IT, biomedicine, nuclear energy, and space technologies.

The result would become one of the world’s biggest economic development boondoggles in recent history. Despite high hopes and splashy beginnings, with interest from some of the most respected people and institutions in tech, the project was mired in corruption and fell into a tailspin. The war with Ukraine only appears to be hastening its demise.

Auspicious beginnings for the “world-class venue”

The French architecture firm AREP was commissioned to build a sleek office and lab space complex ‘Technopark’ to serve as a “world-class venue for entrepreneurs.” It would house a startup incubator, offering resident companies generous tax incentives, customs exemptions, opportunities to receive seed funding. With facilities and landscaping reminiscent of the Googleplex, a visitor could think that they are in Mountain View rather than Moscow. It would be a place where Russia’s best and brightest could realize their creative potential without the need to seek opportunities abroad.

To ensure a steady stream of talent, The Skolkovo Institute of Technology (Skoltech), a private graduate school and research institution would be built from scratch. Through a $300 million partnership with MIT, it developed a state of the art curriculum and recruited top notch faculty from around the world. 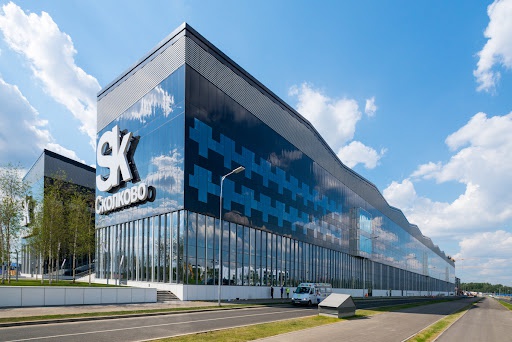 The Skolkovo Foundation coordinated the effort, with a board resembling a who’s who of international business elites. Co-chaired by the Russian oligarch Viktor Vekselberg and ex-head of Intel Craig Barrett, it included then-CEO of Google Erich Schmidt and the Finnish former prime minister Esko Aho.

By 2013, nearly a thousand companies got resident status at Skolkovo and received almost $300 million in government financing, matched by private investments. A number of multinational corporations including Nokia and Boeing established research facilities on Skolkovo grounds. But Skolkovites’ starry eyed enthusiasm was soon given a reality check.

Putin was back in power and some officials involved in the project fell out of favor with the government. Skolkovo was rocked by a number of corruption scandals. A government audit found that more than $45 million in funds were misused and two Skolkovo executives were investigated on embezzlement allegations.

Soon after, Vekselberg’s advisor and politician Ilya Ponomarev was charged with abetting the embezzlement of Skolkovo funds, in what he contends was a politically motivated case. It did not seem like a coincidence, for instance, that Ponomarev was the only member of the Russian parliament to vote against the annexation of Crimea. He ended up leaving the country and going on to work with startups in the U.S. and Ukraine.

Meanwhile, Putin did not share his predecessor's enthusiasm for building an innovation economy. As his government prioritized “investments” into projects like the separatist insurgency in Eastern Ukraine, Skolkovo took the back seat in the political agenda of the day.

Government grants to startups were gradually phased out, which prompted some observers to compare Technopark’s current function to that of a lavish office park. The goal of attracting nearly $12 billion in private investments by 2020 for financing Skolkovo infrastructure and seeding startups has not been met, with only a fraction of the funds raised. Some of the planned buildings in the innovation park remain unbuilt to this day.

A tech hub without unicorns

Despite the billions of dollars that were poured into its development, Skolkovo did not live up to its mission of turning Russia into a startup nation. It failed to produce a single unicorn and or even a company that has become a household name. In 2019, its more than 2200 resident startups attracted just $214 million in private investments. That is close to what one U.S-based cybersecurity company raised in a recent funding round.

Neither did Skolkovo become a panacea for Russia’s brain drain. The exodus of young professionals from the country after the annexation of Crimea, made it difficult to retain talent. And many of the startups that have spun out of Skolkovo have moved their operations outside of Russia and no longer contribute to its economy.

A prime example is ExoAtlet, a former Skolovo resident that developed a robotic exoskeleton used for the rehabilitation of people with mobility impairments. Though the company benefited from a $25,000 grant from the Skolkovo Foundation in 2014, it has since relocated its headquarters to Luxembourg and currently operates outside of Russia. It has raised over $8 million in funding from international investors.

A former Skoltech researcher in computer vision Victor Lempitsky was willing to share his thoughts about the university with The Business of Business for this article. In general, he had many good things to say about Skoltech, arguably the most successful part of the project.

He said many of his former colleagues were “doing research at top level, publishing in top scientific venues, and having fruitful international academic and industrial collaborations.” He mentioned two colleagues that moved from the U.S to build “thriving research groups from scratch.”

Indeed, it was able to achieve international recognition and assemble world-class research teams. In 2021, it appeared in the QS World University Ranking, featured among the top 150 institutions globally for petroleum engineering.

But Lempitsky added that it became more difficult to attract talent from abroad as the political situation in Russia degraded. Lempitsky himself left Russia in the wake of the country’s invasion of Ukraine, as did many of his colleagues.

Soon after Russia’s invasion of Ukraine, MIT announced that it was severing ties with Skoltech. Though the role of the partnership was diminished in recent years, this is yet another blow to its ability to produce cutting edge research.

With sanctions likely to cripple Russia’s modest technology sector, it is unclear who in their right mind would want to invest in a company operating within the walls of Technopark. If there is one lesson to be learned from the ill-fated undertaking, it's that innovation does not mix well with corrupt authoritarianism.

We have included an additional comment, sent to us after publication, from Yuri Nikolsky, former chief science officer for Skolkovo's biomedical startup cluster. Nikolsky pointed out that the incubator has nurtured some successful startups, including AI drug development platform Insilico Medicine which raised over $300 million in financing, and is now headquartered in New York and Hong Kong.