The ambitious, bold and hungry start their week with The Business of Business!
Markets
4.10.19   6:08 PM Markets

They're both opening restaurants. They're both delicious. And they're coastally opposed. Here's the current state of In-N-Out versus Shake Shack.

East Coast versus West Coast. New York versus Los Angeles. Yankees versus Dodgers. Shake Shack versus In-N-Out. Mention any of these pairs and you're likely to get an opinionated New Yorker or Los Angelean with, well, an opinion or two.

In-N-Out Burger makes, inarguably, one of the best — if not the best — fast-food burgers in the world. Visitors to the west coast make a point of stopping in for Double Double.

Meanwhile, in New York City at this moment, hundreds of tourists are lined up to get a taste of Danny Meyer's ShackBurger.

Wherever you land on the burger spectrum, one thing is clear: east coasters are lucky when it comes to Shake Shack, and west-coasters get almost exclusive access to In-N-Out Burger. We've looked at Shake Shack and In-N-Out before, but since the two chains have both gone on store-opening sprees, we thought it was time to revisit the burger battlefield.

In the map above, we see Shake Shack in red and its ubiquity in the Northeast and Europe. In blue, In-N-Out Burger dots the west coast.

But if you want both, you'll want to head to Texas. In Dallas, Austin, and San Antonio, lucky burger burglars have access to both chains. Los Angeleans now have a few Shake Shack locations, too, but we'll ignore that for now since we're writing this from New York and could really go for some animal style.

When it comes to store location totals, In-N-Out dominates, at least so far. And that makes sense: the chain launched in 1948. But Shake Shack's openings have been brisk. In fact, it quietly (and quickly) opened 50 restaurants just last month. 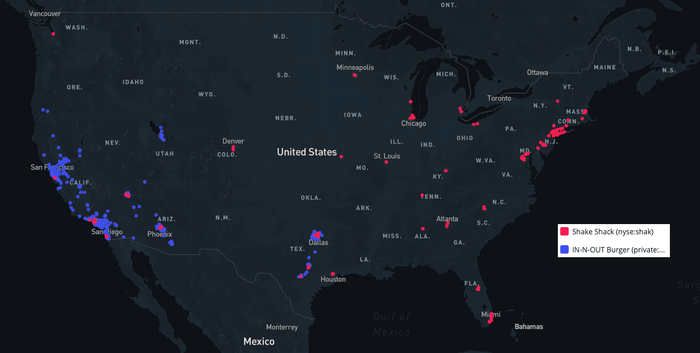