The ambitious, bold and hungry start their week with The Business of Business!
Markets
9.14.18   8:07 PM Markets

Highwoods Properties, Tanger Factory Outlet Centers rank among the top real estate trust companies in terms of its portfolio size in the Carolinas.

Hurricane Florence made landfall, and as it hits the coast of North Carolina, catastrophic freshwater flooding is expected over portions of the Carolinas.

While we can't predict the exact damage Florence will cause when it moves on next week, we do have the data on what major Carolina commercial real estate landlords will feel the hurt.

Whether it is malls or office buildings, these locations could be affected by hurricane-force winds and potential flooding, causing issues for both the property owner and its tenants. When looking at the biggest real estate trusts in the area, Raleigh-based Highwoods Properties, Inc. ($HIW) has the most pieces of commercial property in the Carolinas. In fact, it has more properties than the next four real estate trust companies combined.

What's even more concerning is that Highwood Properties not only has the most-owned properties in the Carolinas, but nearly 50% of its portfolio is based in those two states.

Mapping out the five companies with the most North and South Carolina locations against its overall portfolio shows Highwood's holdings are essentially concentrated around its founding city of Raleigh and nearby Greensboro. For the remaining four, its real estate is scattered around the Carolinas, with some in line with areas for high flash flood potential. Tanger Factory Outlet Centers ($SKT) has the majority of its outlet malls on or near the coast, with one mall located in Nags Head where waves from the storm were coming in at 12 feet high. 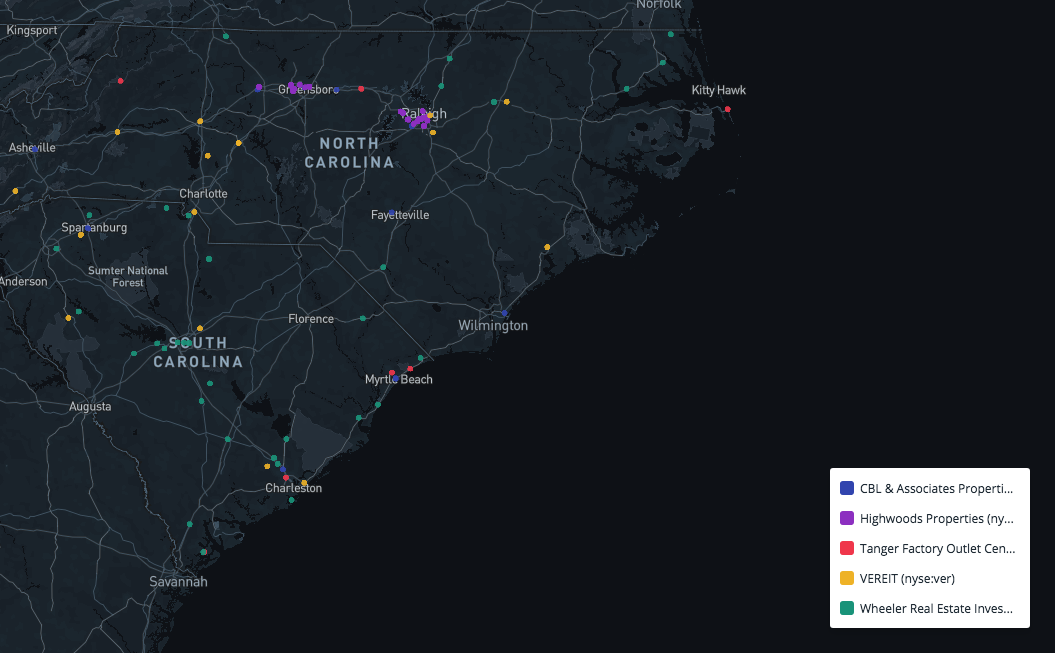 The tenants that could be most affected by Florence

In terms of tenants, the second, third and fourth companies on the list each have unique data footprints.

For Wheeler Real Estate Investment Trust ($WHLR), its top-three tenants  as of Sept. 14 are supermarket companies. Specifically, it's Bi-LO ($PRIVATE:PRIV_SOUTHEASTERNGROCERS), Food Lion ($DEG), which we covered in our previous Hurricane Florence piece, and Piggly Wiggly ($PRIVATE:CSWG). It also has a fair amount of vacant storefronts and other real estate space, which may seem like a lot, but only accounts for less than 15% of its real estate.

For all of these three real estate trust companies, the most common tenants are part of national chains and only represent a small piece of their respective companies' footprints. For example: those Polo Ralph Lauren Factory Stores at Tanger Outlets only represent 13.5% of its 518 brick-and-mortar Ralph Lauren stores. This, combined with its online sales and the fact that those are only outlet stores, should be taken into account when determining the impact of Hurricane Florence on the business, if any.

Still, having even one store damaged by a storm is tough on any company, as it would divert resources or tap into any funds to fix up the store and restock products.