The ambitious, bold and hungry start their week with The Business of Business!
Markets
11.19.21   8:04 PM Markets

According to Thinknum data, Quora is focusing on hiring workers with technical specialties in monetization, advertising, and growth.

Something is stirring at Quora.

The Mountain View, California-based company is rumored to be heading for an IPO, but of course is not commenting. Job listings data and other information gathered by Thinknum strongly suggest, however, that a big move is likely to happen soon.

Quora was founded in 2009 by former Facebook employees Adam D’Angelo and Charlie Cheever as a knowledge-sharing service – simply put, to match questions with answers. Users post questions and get responses; the best, or most popular, responses get voted up. The more up-votes, the better, though Quora’s explicit aim is to get quality answers, not just a lot of answers. A quality answer is thoughtful, funny, relevant, tonally reasonable – it adds something unique to the discussion.

Currently it remains privately held, with at least $226 million in funding, and a valuation of around $2 billion.

Thinknum’s data paints an intriguing picture of how the company is positioning itself. The first marker – and quite a dramatic one –  is in hiring activity. We are able to take a look at that using job listings data collected from online recruiting resources.

Between November 2018 and the end of June 2021, Quora’s job postings were roughly flat. There was  even a round of layoffs in January 2020, just before the pandemic hit. There was a surge of hiring between the end of July and the beginning of August, and then job listings leveled off again before taking off like a rocket in October. On Oct. 19, the company had 95 listings. By November, that number had climbed to 365, or an increase of about 284%.

Whatever the cause, the hiring data alone is highly suggestive that Quora is preparing for a major expansion of its business.

Pure volume of hiring data is useful. But we can also gain some insights by looking at what roles the company is hiring for, and how many open positions there are, among other factors

About 10 types of employees are the most sought after, all with 21 openings, based on Thinknum’s count. Based on those positions, a pattern is clear: Quora wants workers with technical specialties in monetization, advertising, and growth. immediately. That suggests the surge could be just the beginning of an expansion for Quora.

An interesting intriguing subset of engineering positions  is the area of monetization of mechanical learning. Mechanical learning and AI are at the center of social media; they help make the very connection between users that Quora says it wants to make. Turning that technology into part of the money-making machinery is essential, and it’s clear that Quora recognizes this, just by how many of these specialists they’re looking to find. 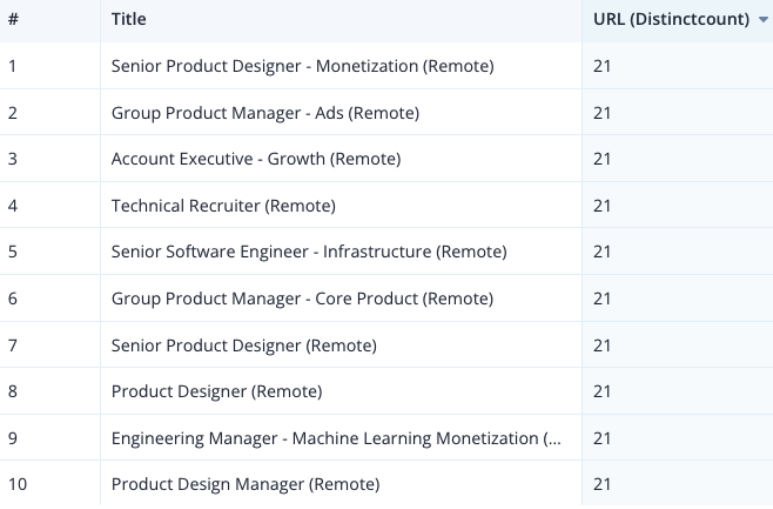 The data indicates that most of the jobs are based at the company's headquarters in California, although virtually all have a remote work option.

Another sign the company might be poised for growth is in its app data, specifically the number of reviews users are leaving in the App Store.  This information, also collected by Thinknum, is a proxy for how often the app is being downloaded.  Here, the number gently slopes upward until March of this year, at which point the curve becomes much more dramatic – the sheer volume of reviews of the Quora app on the Apple Store takes off.

Curiously, we can look at the company’s web traffic and see that it appears to have dropped off considerably since late 2019 and has remained fairly flat. This could be taken as a warning sign that engagement on the web is drying up — not shrinking but also definitely not blooming. On the other hand, it could be a signal that Quora is successfully driving people away from its websites and to its app, which is a good problem to have.