Special Report: Predatory lending after 2008 affects American Indians the most

A study of more than 3 million mortgages since 2007 reveals how and where predatory lending continues.

Data from the Consumer Financial Protection Bureau (CFPB) show that while mortgage interest rate spreads have declined in the 2008 subprime crisis, these declines have not been equal among minorities. The data, disclosed through the Home Mortgage Disclosure Act, allows us to look at the breakdown of rate spreads across borrowers who self-identified across racial and gender lines.

We crunched data for more than 3 million mortgages reported since 2007 and found:

The 2008 global financial crisis didn't just result in the collapse of Lehman Brothers, the Bank of America purchase of Merrill Lynch, and the government takeover of Fannie Mae and Freddie Mac. For many people, it ended in foreclosure and eviction as the US housing bubble popped and residential property values tumbled.

At the core of this was the way banks were handing out mortgages to people who, ultimately, couldn't make regular payments. Interest-only, adjustable-rate mortgages ballooned to the point that people could no longer afford to make payments. Many of the companies handing out these loans — such as Countrywide Financial — were described as handing out loans to "anyone with a pulse", as loan officers at the bank joked internally.

From 1993 to 2000, the share of subprime mortgages going to households in minority neighborhoods rose from 2 to 18 percent.

In many cases, those who lost their homes were ethnic minorities who bought into the high-rate, ballooning loans. A study published in American Sociological Review showed that predatory lending in the 1990s focused on minority areas, where consumers with poor credit and other high-risk factors resulted in a high rate spread. The study looked at 100 of the largest US metropolitan areas and saw "powerful predictors of foreclosures" among predominantly African-American and Hispanic areas.

"As a result," their study concludes, "from 1993 to 2000, the share of subprime mortgages going to households in minority neighborhoods rose from 2 to 18 percent."

But that's ancient history, right? We fixed everything after the lessons we learned in 2008, right?

According to the 3-million mortgage records we analyzed, the answer is yes... and no.

Overall, mortgage lending has become fairer to borrowers, or, at the very least, more equitable to borrowers who now qualify. The average rate spread declined from nearly 5.0 to just 2.5 in 2017, indicating homeowners now pay more principal on a monthly basis than they did before the financial crisis. 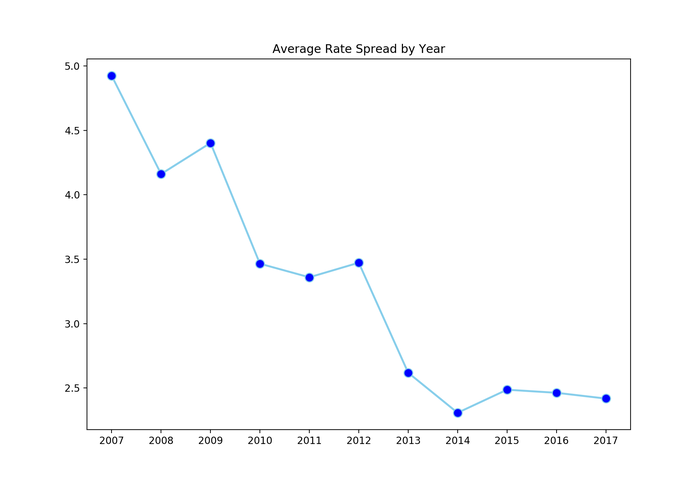 Average rate spreads have declined noticeably since 2007, from nearly 5% to half that.

A potential cause of this, including the second cliff we see here in 2013, stems from CFPB regulations drawn up that year. The regulations require lenders to ensure that borrowers are able to prove their incomes when applying for loans. This, in essence, means that those who are approved for mortgages since these rules went into effect are likely to qualify for lower interest rates.

"Ability-to-Repay" regulations were also put in effect to prevent lenders from steering risky borrowers into adjustable-rate or interest-only loans, reducing the number of loans that would see swelling interest rate spreads.

Interest rates haven't favored one gender over another as the spread has declined. While female lendees saw a slightly better average spread in 2010-2012, any difference since then has been negligible. 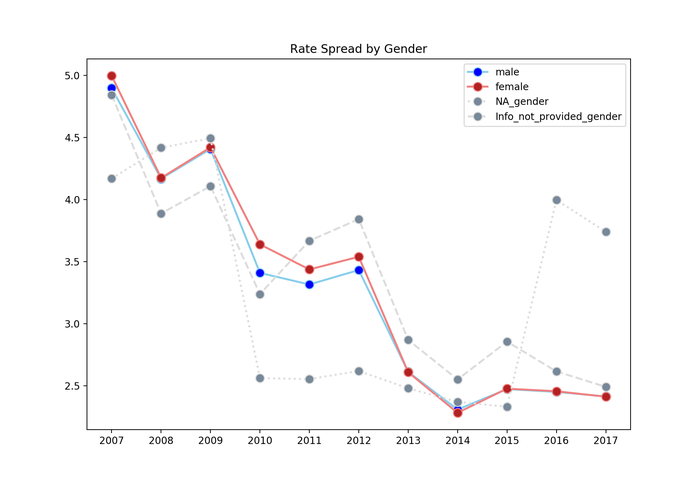 Rate spreads once favored men, but since 2007 that appears to have changed.

This wasn't always the case, however. The Consumer Federation of America published a report in 2006 — at the apex of subprime lending — finding women are more likely to get a bad deal.

32% of women borrowers received subprime mortgages compared to 24.2% for men

"Women with the highest incomes have the highest disparities relative to men with similar incomes than women at lower income levels," it found. This, the CFA found, despite the fact that, on average, women had slightly higher credit scores than men. It also found that 32% of women borrowers received subprime mortgages compared to 24.2% for men.

It also found that women of color were the most likely to receive subprime loans, and those white men were the least likely at virtually every income level. 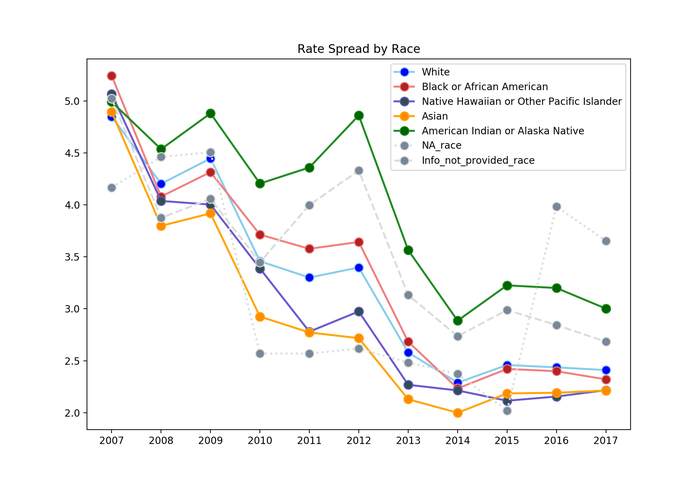 American Indians have fared the worst when it comes to how rate spreads differ by race.

The reason for this, according to experts, likely has to do with a lack of financial education among American Indians. Brett Robinson, Managing Director of First Tribal Lending told Thinknum Media that the disparity likely has a lot to do with government-guaranteed loans that allow American Indians and Alaska Natives to get home loans with "low down payments and flexible underwriting." In some cases, Section 184 loans don't require credit scores and, as such, are seen as higher risks by banks, resulting in higher interest rates.

"Many are also first-time buyers for their families," Robinson points out. "They're the first in their long family history to own homes."

He's quick to point out that he does not attribute it to discriminatory lending.

"Is it systematic discrimination? I doubt it. The loan business is so commoditized now. It all comes down from Jennie Mae, FHA, Freddie Mac. They all have price adjusters," he notes. He adds that things are likely better now than they were before 2008, even.

"Before the meltdown," Robinson notes, "you could price a loan however you want. Now, loan officers can't. They get paid the same regardless of the [rates]. They can't steer people into loans that pay the officer more. They removed that incentive."

In short, he points to the fact that American Indians have, on average, fewer assets and smaller down payments which result in a higher average rate spread.

"Typically, minority communities don't have as many assets."

From urban to rural predatory lending

Before 2008, urban minorities were hit hardest by high-interest rates, Since then, however, it's bee rural communities that have seen the highest mortgage rates.

Predatory lending, at least in its pre-2008 form, largely targeted urban minorities such as African Americans and Hispanic Americans. Since then, the highest rate spreads are focused in rural, lower-population areas. This also coincides with where Indian Americans are likely to purchase homes, but it also points to possible distress in America's agrarian communities.

Across the same 3 million mortgages, rural areas saw the highest rate spread since 2008.

While predatory lending in mortgages has clearly been curbed since 2008, it hasn't changed as much for certain ethnic groups or for people living in economically distressed areas. Meanwhile, some argue that changes in laws since 2008 have negatively affected lower-income individuals who are hoping to one day become homeowners. In Philadelphia, for instance, homeownership has declined 8% since 2007. Meanwhile, exorbitant interest rates continue to affect those with unsecured debt such as credit cards, personal loans, and student loans.

Other special reports from Thinknum Media: