The ambitious, bold and hungry start their week with The Business of Business!
Markets
4.19.22   4:10 PM Markets

Poison pills come up more often than you think

The maneuver attracted widespread attention after Twitter adopted it to fend off Elon Musk. Our data shows poison pills are considered surprisingly often.

Leg warmers, a fad that first flourished in the 1980s, are back. So, too, apparently are poison pills.

Shareholder rights plans, as they are more formally known, were originally designed in the early 1980s by lawyers at Wachtell, Lipton, Rosen & Katz to deter hostile takeovers. They allow existing shareholders to buy more stock at a discount, which makes acquisitions more expensive — but also tends to bring down the value of each share. (Similar in effect to a spy taking poison when captured by the enemy.)

After the heady corporate raider days of the 1980s and early 1990s, the term fell into relative obscurity. Then it reemerged last week into the popular lexicon, propelled by Elon Musk’s shocking takeover bid for Twitter.

Twitter’s board of directors instituted a poison pill to deflect Musk. The Tesla CEO announced a proposal to buy the social media platform for $54.20 a share, valuing the company at a total of$43 billion. He filed an official notice of the offer with the SEC on  April 13.

If you were perplexed by the sudden appearance of the term, and wondered what it meant, you weren’t alone. Even business leaders like venture capitalist and Reddit co-founder Alexis Ohanian were unfamiliar with the tactic. 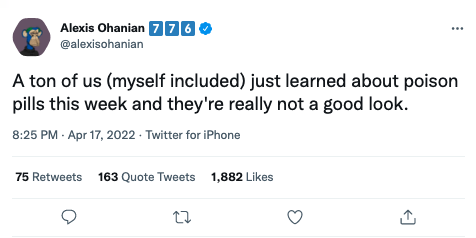 But even if they weren’t trending on social media, poison pills have never gone away. They are a frequently-discussed item in the toolbox of public companies, according to information gathered by our parent Thinknum Alternative Data. Using Thinknum data, we could determine how often “poison pills” are mentioned in public company SEC filings. Upon close inspection, some patterns emerge.

Data analysis shows there’s a cyclical nature to when companies start talking about  poison pills. Mentions of the term “poison pill” consistently spike in company documents on March 1, the SEC filing deadline for large companies with public equity floats of $700 million or more.

References to “poison pills” peaked in March 2021, with 438 documents including the phrase, a 15.6% increase compared to the same period in the previous year. This March, the number slid 6.1% year-over-year to 411.

The phrase “poison pill” is also more popular than “shareholder rights plan,” even though the latter is more technical and precise-sounding.

Twitter isn’t the only high-profile company that has implemented a poison pill this year. The department store chain Kohl’s adopted one in early February after ​​one of its activist investors, Macellum Capital, pushed for a sale and announced plans to nominate directors to take control of the company. Surprisingly, the move has been a win for shareholders.

The stock price of Kohl’s rose by nearly 2% on the day the poison pill was implemented, and as of April 18, shares were selling at $60.90, up nearly 23% since the beginning of this year. Rebuffing the first suitor ignited a bidding war, helping to drive up the price.

So it seems poison pills can still serve useful purposes these days. The jury is still out on leg warmers, though.