The ambitious, bold and hungry start their week with The Business of Business!
People
3.15.18   3:57 PM People

Logitech dominates in the home control space, but for how long? We look at the company's history of poor reviews for its flagship products.

When it comes to universal remote controls that allow you to control things via a smartphone, Logitech ($LOGI) virtually owns the space. Sure, there are apps that partially compete from Nest, Roku, and Google, but few - if any - really tie things together the way that something like the Logitech Home Ultimate does (or at least promises to).

For those not in the know, Logitech Home Ultimate creates a wifi-based hub that controls all of your devices - TVs, streaming devices, smart thermostats, etc. - from one location. Sure, the Logitech kits come with a handheld remote control that works just fine. But the real magic - and future - is in the fact that you can control everything in your home with a smartphone app regardless of where you are.

Need to turn the lights on? Fire up the Harmony Control app. Want to turn the TV on for Sparky while you're away? Fire it up.

You get the picture.

But it seems Logitech's customers aren't loving the Harmony Control App. In fact, they've never really loved it. And they're speaking their minds about, especially lately.

As you see, number of ratings is accelerating, which tells us that users have a lot to say, especially lately as more customers jump onto the $349 Harmony platform.

But over time, users have never been terribly thrilled with Logitech's Harmony Control app. The app's rating has stalled at a meager 2 out of 5 on the iTunes store for years.

Sure, some versions have had better ratings than others, as you see the bumps and dips in the graph above. The chart below shows all of the Harmony Control versions along with its average rating.

So what is it that people don't like about the app? Certainly part of the poor ratings can be explained by the learning curve involved with the complexities of smart home and entertainment system controls. While Logitech has designed a system that's pretty intuitive, getting all of your devices up and running in proper form is an exercise that's often laced with inexplicable frustrations. Sometimes the problem is user error, sometimes it's the fault of the devices you're trying to control, and, yes, sometime's it's the controller or app's problem because, after all, that's the device that promises to make it all easier.

Indeed, users seem to find the app hard to use, stating that it's "poorly made" or "not for the techno impaired." User Apefragments noted on February 8, 2018:

I rarely leave app reviews but this app/product is so awful I feel it's my responsibility to warn others. It just doesn't work properly. I have spent hours configuring various 'activities' within the app to do things like turn on my TV, change video source, and raise/lower sound bar volume. These activities rarely work well, and frequently only part of the command will run, resulting in a situation where maybe my sound bar turns on but my TV does not, but Harmony now believes both devices are on, so I have to do find my old TV and sound bar remote controls and manually sync everything up.

This app works surprisingly well. I've had harmony remotes for years, although in the past the remotes themselves had to be programmed over a USB cable via a painful process. The newer design with a programmable hub is so much better. It's quick and easy to tweak configurations right from the couch when you want to. There are many little details which seem well thought out like incorporating the iPhone volume buttons and exposing some controls by force touching the app icon.

It's clear that Logitech is well positioned with domination in an increasingly complex home control market. But a look at their flagship product's reviews could be evidence that the company is dropping the ball. We'll continue to watch the space, but for now, Logitech may want to look for some app designers. 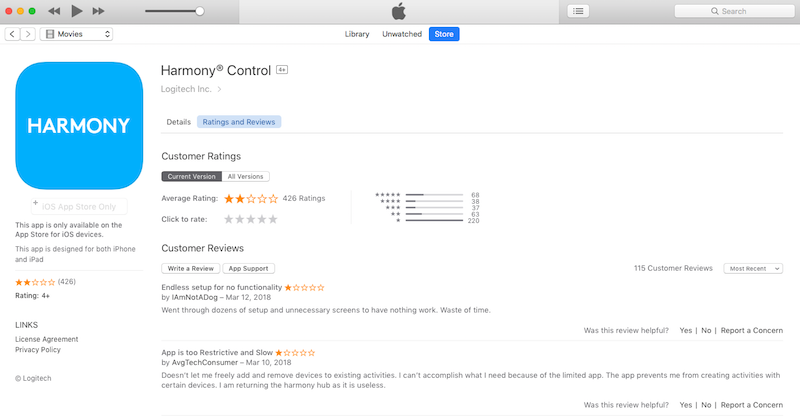