The ambitious, bold and hungry start their week with The Business of Business!
Tech
7.8.20   8:44 PM Tech

A look inside Parler: The right-wing social media app is unbearably monotonous, even to its users

On the July 2nd presentation of Squawk Box, Parler ($PRIVATE:PARLER) CEO John Matze batted away charges that his microblogging app catered to hate-speechifiers and asocial personalities. As these things go, Matze did an okay-enough job under tough questioning from the CNBC host, and in the end, nobody learned much of anything.

Matze stated that Parler simply trusts in the “goodness of the American people” and if the “crazies” want to join his app and embarrass themselves, engaging in dialogue with them might be worthwhile. The host asked Matze to denounce his user base and essentially destroy his credibility in their eyes, which, of course, Matze declined to do. Don’t we love modern discourse?

The same day, I anticipated that Parler would struggle, as its right-wing base abandoned Twitter and shut themselves out from the wider range of content such sites have to offer, creating a kind of conservative echo chamber. Users are already noting this problem, with Jack Posobiec and a few other high-profile conservatives grumbling that Parler is more like a 24/7 Trump rally than a platform for true social exchange. As much as the over 3 million users on the platform love Trump, you can understand how that could get old. Making fun of liberals is half the fun for conservatives on social media, so few have joined Parler. No one has taken the $20,000 prize that Matze offered to any liberal pundit that joins the site, forcing Parleyers to copy-and-paste liberal takes from Twitter.

Parler has seen a lot of media buzz, but its engagement stats are evening out around 140,000 Twitter followers. Its Apple Store review count has stalled at 10,400. Take this with some core issues on the platform, and these are warning signs of a traffic bubble set to burst.

To kick the tires and get a fuller sense of the ‘virtual town square’’s market potential, I spent a few despondent days clicking around Parler’s platform. Here are some of my observations:

The reports are accurate: Parler has a monoculture problem, and it's hard to see a way out.

In a daily cycle, the Parler community picks a topic that makes them angry and runs with it. The resulting discourse is  hundreds of people with the exact same take shouting disconnected thought fragments into the void. The next day, it all starts again.

You might say Twitter has a similar issue, and you would be partially right. But without reporters, news crews, disinterested observers, or opposing viewpoints to ground Parler's discourse, its monotony is worse by an order of magnitude. Consider the way the platform was discussing the Black Lives Matter movement on July 6: 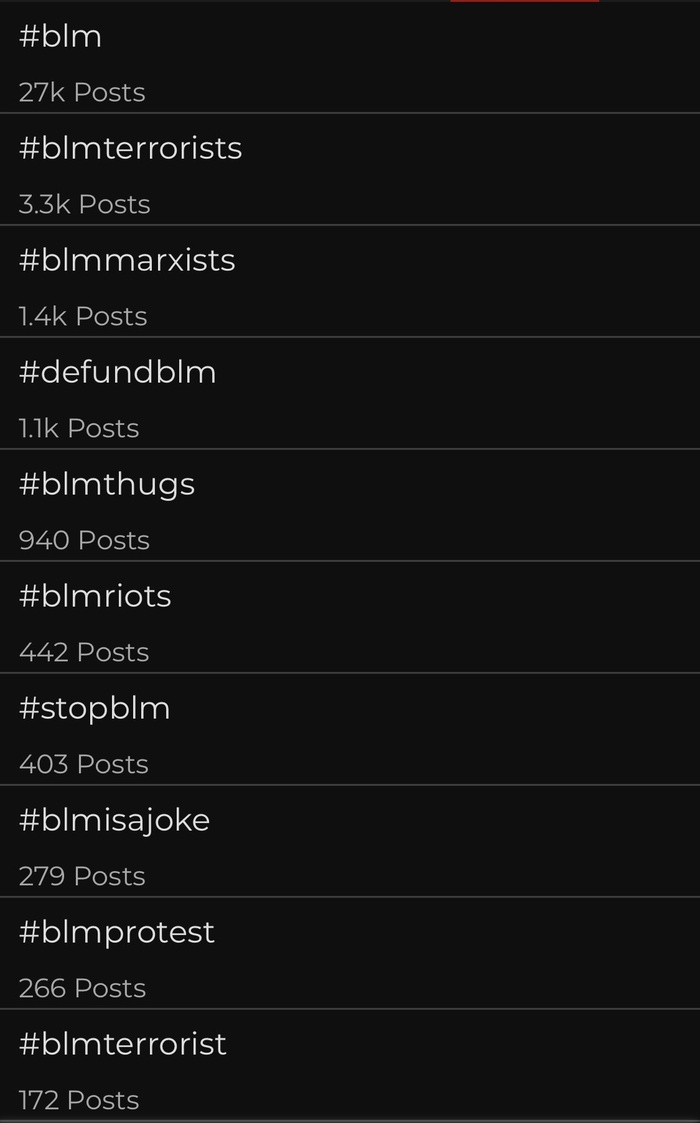 There isn’t much room for nuanced discussion when the jumping off point for the entire platform is #blmterrorists and #blmthugs, the latter of which features Parlayers knowingly using a dog whistle en masse. Though #defundblm sounds like it could be some kind of policy discussion, it actually refers to the conspiracy that BLM protests all over the world are being financed by a cabal of globalists who want to destroy America.

This crass framing is far removed from mainstream opinions on the topic, with a majority of Americans supporting the BLM movement in 2020. A Rasmussen poll found that figure to be 62% of likely voters, which beats Donald Trump’s approval rating by 22 points at the time of writing.

The ideas available on Parler aren’t “challenging," as the right packages such goods. They are inscrutable and un-related to the things most people care about. A good comparison for the quality of discourse would be the recently-banned r/The_Donald subreddit. Parler is r/The_Donald with even less original content. Its posts are not meant for outside eyes, yet its users gesture constantly to the outside. That’s fine for a subreddit, but severely limiting for the business model of an app like Parler, which will depend on advertisers reaching broad audiences.

Adding to these issues, the laser focus on the hot-button issue of the day leaves the platform particularly vulnerable to spam. Many accounts seek out trending hashtags and stamp them on every tweet, along with whatever their own message is, no matter how disconnected.

User @pearlsoutofonyx is one of many accounts deploying this strategy, gaming Parler’s algorithm to appear at the top of everyone’s newsfeed. Under a flurry of hashtags like #stopwhitegenocide and #itsnotokaytobegay, the user recently posted a portrait meant to honor the life of Eljah McClain, the 23-year-old black man who was tragically killed by police in 2019. The only message, besides the cruel hashtags, is a middle finger emoji. 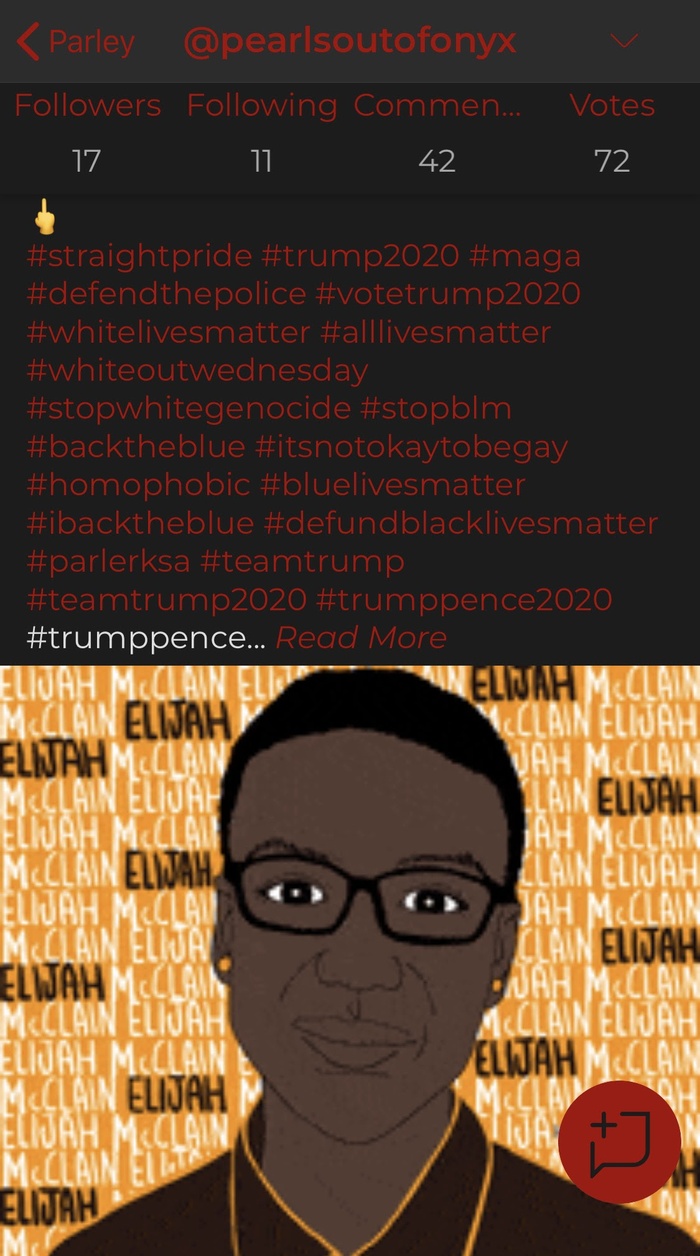 John Matze has pushed this hashtag himself, both in his statement on Squawk Box and on his own Parler account. Matze of course refers to powerful executives like Mr. Dorsey, who would use their platform to silence conservatives. This will probably be a topic of interest for the foreseeable future, as Parler continues to stake out the space of a more “patriotic” alternative to Twitter. Matze’s handle is @John, a nod to Jack Dorsey of Twitter’s @jack. 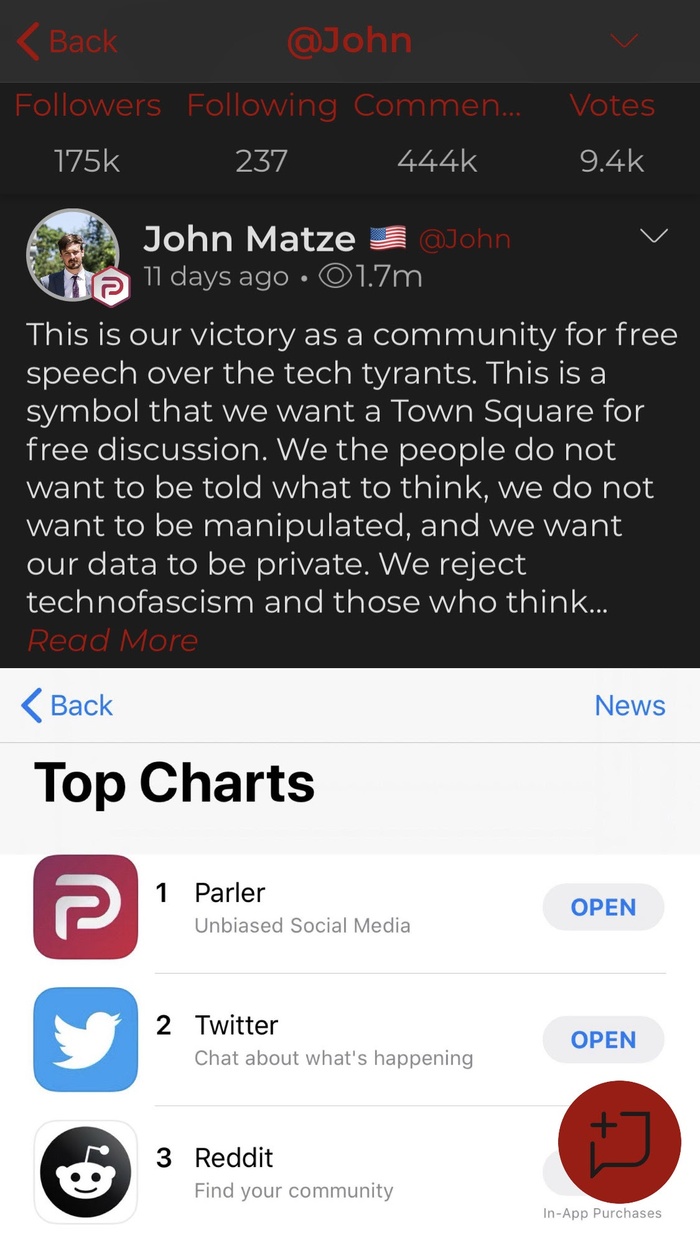 Matze and his investors are leaning hard on this right-wing/libertarian ethos, at the risk of alienating non-conservatives who don’t quite buy Parler’s framing. In a recent op-ed, angel investor Jeffrey Wernick congratulated himself for the solemn responsibility of funding Parler, saying similar technology “provides us the best chance to break free from the cycle of tyranny and liberate humankind.” Unfortunately for him, most Americans don’t see the same historic importance in his investment. It’s a whole lot of ideological baggage to take on, when all Jeff is talking about is joining an app.

Wohl was unverified on Parler a little while ago, so he’s decided to pout about it

Now he’s “only” on Gab/Telegram/Instagram

In all fairness, he is actually pretty right about the terms of service and basic functionality improvements pic.twitter.com/II9QeJS07k

Fraudster Jacob Wohl, who made a name for himself falsifying scandalous stories about his political rivals, complained last month that Parler hadn’t improved its services since he had joined the platform a year ago. This, and Wohl’s claim that Parler unverified his account without explanation, were his stated reasons for stepping away from the platform. Though I cannot speak to the veracity of Wohl’s other claims, I can definitely attest to the shakier aspects of Parler v2.25’s  functionality.

In this delicate time, with thousands of new users joining everyday, Parler isn’t running smoothly. The platform’s search bar glitches about one out of every four search attempts, making the user wait as the results page refreshes and jumps around trying to complete the request. Parler’s ‘echo’ function, a clone of Twitter's retweet, brings up a stubborn, hard-to-navigate page with a blocky design reminiscent of Facebook in 2013. Parler also lacks a ready-made ‘embed’ function, meaning users will not be able to direct outside traffic its way anytime soon (hence the screenshots in this piece). This helps explain why its URL share count is plateauing as well, hovering around 51,000.

But the most egregious functionality gap is near fatal: Neither the web version of Parler nor the iPhone app allows users to search for specific words or phrases, with searches limited to a directory of other users and hashtags. 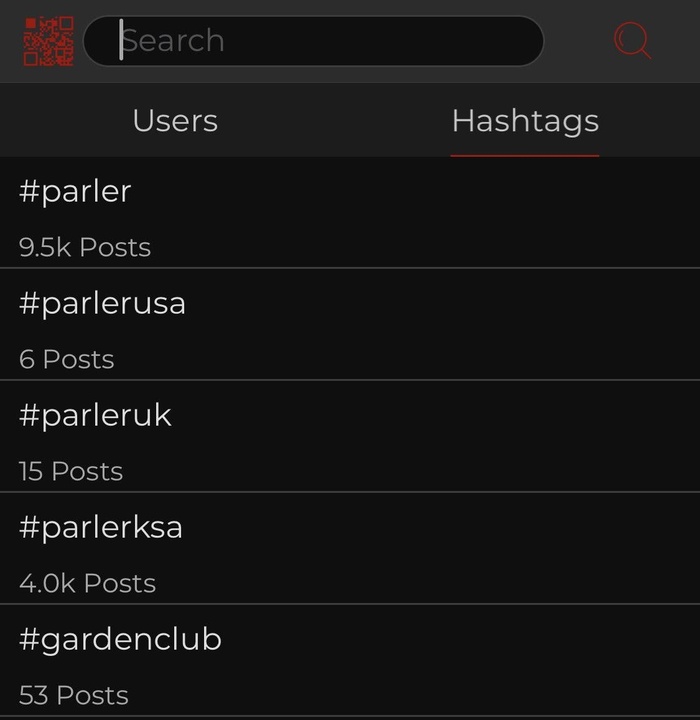 This omission severely limits the user’s ability to find any kind of specific content. It also means that big accounts will make up a healthy majority of what the user sees. Though I followed hundreds of accounts as a test, I couldn’t escape the bombardment of content from Laura Loomer and Dan Bongino, as if the entire community were just these two.

Loomer was banned from Twitter and Facebook for baselessly calling congresswoman Ilhan Omar (D-Minn.) “anti-Jewish” and “pro-Sharia," and is now running for congress in Florida’s 21st District. Dan Bongino is an ex-NRA TV host who claims an “ownership stake” in Parler. Here, he is full of crocodile tears for the violence New York City saw over the holiday weekend: 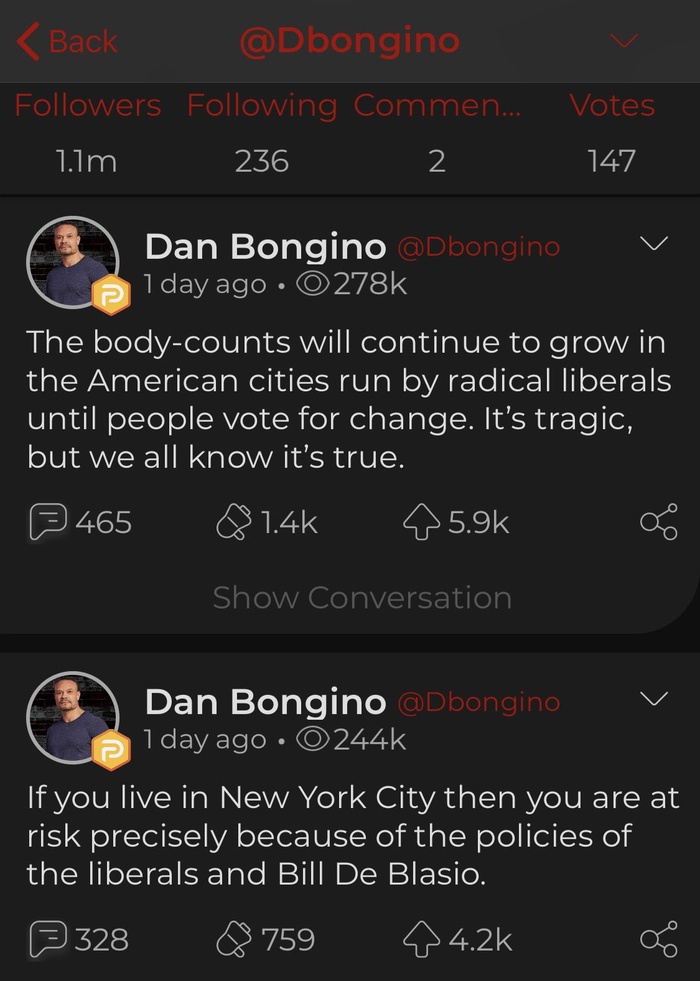 There is an argument to be made that the Bongino-friendly algorithm is a form of censorship or “whitelisting.” You can’t look up a topic unless it's formally approved by a trending hashtag, and likely won’t find content from a small user’s account. Sure, you can say whatever you want, but if you’re among the majority of users, your words will get lost in the void. The “virtual town square” is more like a bunch of atomized townsfolk subscribing to each other's newsletters.

What could be the thinking behind this choice? I have a guess, but it’s not charitable. It's easier to bury your platform’s awful content from the general public if you can’t search for keywords. There could be some messages that Matze and Bongino are still uncomfortable being associated with.

In cases like this, many new users are likely to become frustrated with the platform and head back to whatever they were using before. Twitter’s algorithm is far from perfect, but it doesn’t flood your screen with racist spam, and it generally spreads out posts so that you aren’t hearing from the same few people over and over again. A good algorithm takes time to figure out, but now would be the time for Parler to get on it. There's a good chance that Parler’s engagement stats are already about to reach their peak, as even users complain about the monotonous experience. Excluding the possibility of a seed change event, the platform will probably start leaking active users as quickly as it's been gaining them.

Looking beyond stockholder concerns, I don’t think there's much to Parler in terms of social value. I omitted plenty of material because the lazy, racist, reactionary thinking illustrated nothing, stood for nothing, and did nothing. Maybe there's some social good in tucking that stuff away in an unsearchable part of the internet.

The ads on Parler are pretty good so far. pic.twitter.com/LamlgF0LSR