The ambitious, bold and hungry start their week with The Business of Business!
Markets
9.24.18   8:11 PM Markets

Papa John's could close 150-250 stores in "non-core" markets should sales continue to decline. Here's where they could be.

Papa John's ($PZZA) is still slumping almost a year after founder and then-CEO John Schnatter blamed the NFL for declining pizza sales, and three months removed from his messy resignation.

In Papa John's most recent quarterly shareholder update from August 7, the company reported a 10.5% decrease in July same-store sales. It directly cited "recent negative publicity surrounding the company’s brand" as a reason behind decrease. The pizza chain submitted filings to the U.S. Patent and Trade Office to show its desire to drop the apostrophe from its name, most likely to stop the hemorrhaging associated with its ousted face of the company.

According to consumer and retail equity analyst Chris O'Cull, should Papa John's — or Papa Johns — continue to face declining sales, 150 to 250 stores in "noncore markets, the West Coast and the Northeast" could face closure.

Currently, there are 3,370 Papa John's franchisee and company owned stores in America. 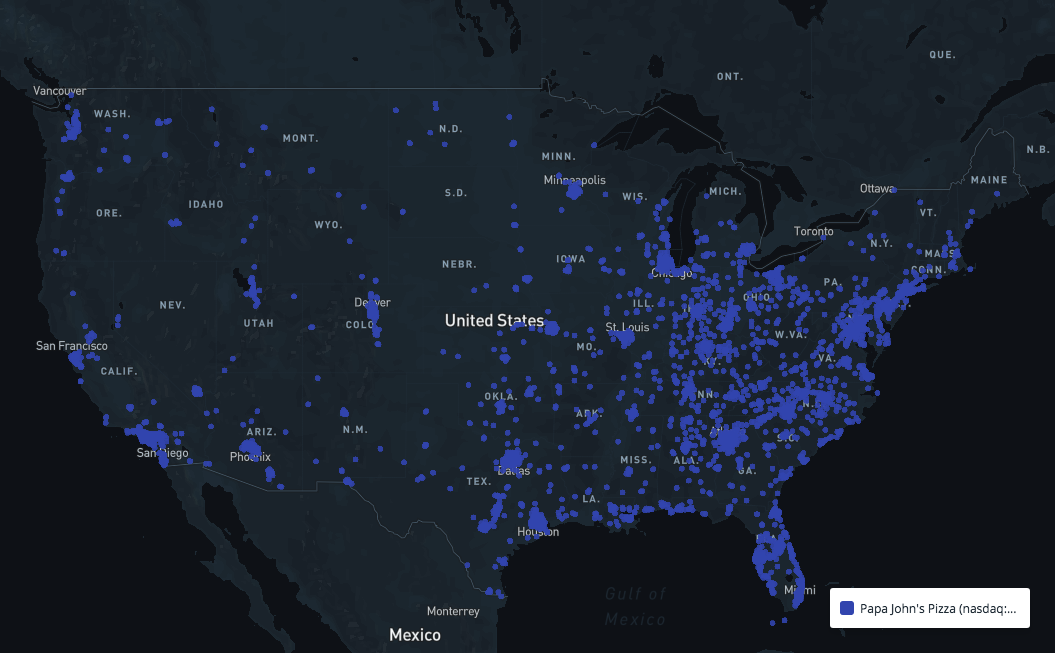 Houston, Texas, a locale that tends to have plenty of fast food locations, leads the list of cities with the most Papa John's stores with 35. Brooklyn, New York, the home of pizza meccas such as Grimaldi's and Spumoni Gardens, claims 18 stores to rank the highest out of all Northeast cities.

While we cannot read the minds of those who would enact closures should Papa John's sales continue to decline, we do have data on the other giant pizza chains Domino's ($DPZ) and Pizza Hut ($YUM). Two months ago, we took a slice of the data we had to show who was winning the "pizza war," which was Yum! Brands' child Pizza Hut.

Now with more updated data, we can see where Papa John's is distant and close to its competitors, which could give clues to where it may shut down stores in case of a continued decline.

Where Papa John's could get kneaded out

Texas and California lead the list of where Pizza Hut and Domino's are dominating Papa John's in terms of store count, with Pennsylvania leading all Northeastern states with 118 more Pizza Huts and 102 more Domino's Pizza stores than the number of Papa John's locations.

Along with New York and Massachusetts, two Domino's hot beds, Pennsylvania could be a target for store closures if its competitors are proving to be too much for the Papa to handle.

When looking at the states where Papa John's is winning the pizza war the Northeast crops up again.

To go by Hotelling's Model of Spatial Competition (read: similar stores close together is good for all businesses involved), it seems Maryland and Delaware could be targets if business in those areas deem those states "non-core markets."