How violent were July's best-selling video games? Not very, according to new data

Of the top-30 games sold at Walmart, Amazon, and GameStop in July, just 7 were rated "Mature" by the ESRB

Following a mass shooting in one of its Texas stores, Walmart ($WMT) said its stores would remove displays and ads for violent videogames. The move was in reaction to critics and pundits relating the sale of violent video games to mass shootings.

Whether this will work is the subject for another story and perhaps another site. But we can look at some objective data here: exactly what games is Walmart selling that could be deemed 'violent?'

Of the 30 best-selling games at the three retailers (top-10 for each), just 7 were categorized as "Mature" by the ESRB (Entertainment and Software Ratings Bureau). Of those 7, 4 were sold at Walmart, one was sold at GameStop, and two were sold at Amazon.

We took a look at the best-selling games at Walmart, GameStop, and Amazon in the weeks leading up to the tragic shooting at an El Paso Walmart August 2 to understand how many violent videogames are being sold at Walmart (and other places), and how this might affect those games' product placements moving forward. For context, we also looked at July best-sellers for GameStop and Amazon.

Of the 30 best-selling games at the three retailers (top-10 for each), just 7 were categorized as "Mature" by the ESRB (Entertainment and Software Ratings Bureau). Of those 7, 4 were sold at Walmart, one was sold at GameStop, and two were sold at Amazon.

At Walmart.com, four of the store's ten best-selling videogames — including the #1 best-seller — are rated "Mature" by the ESRB. Interestingly, the best-serller, Call of Duty: Infinite Warfare, is a 2018 release, but its discount price ($10 as of today) vaulted it to the top of Walmart's sales ranks. Other mature titles in the top-10 included Battlefield 1, Grand Theft Auto V, and Dying Light, a zombie survival game. This chart can be downloaded as an image below.

At GameStop ($GME), a store that specializes only in videogames, only one of the top-10 sellers was rated "Mature". That one game was Call of Duty: Modern Warfare, a game that comes out in October 2019 (GameStop includes pre-orders in its sales ranks).

At Amazon ($AMZN), two of the top-10 videogame sellers were rated "Mature" by the ESRB. Those included Fallout 76 and The Last of Us Remastered.

What to make of the data

The lists included here are the best-sellers at three of the largest videogame retailers in the world. As such, they represent what was being played by gamers in the past few weeks. As for whether or not 7 out of 30 games is too many - or too little - or if playing violent videogames has the effect some people would hold they do, we can't answer that. It's already clear that Walmart has removed signage for violent games, which will likely affect sales. So, given that, perhaps the most important result of this data is yet to come: will there be fewer violent videogames on Walmart's best-sellers list come next month? We'll let you know. 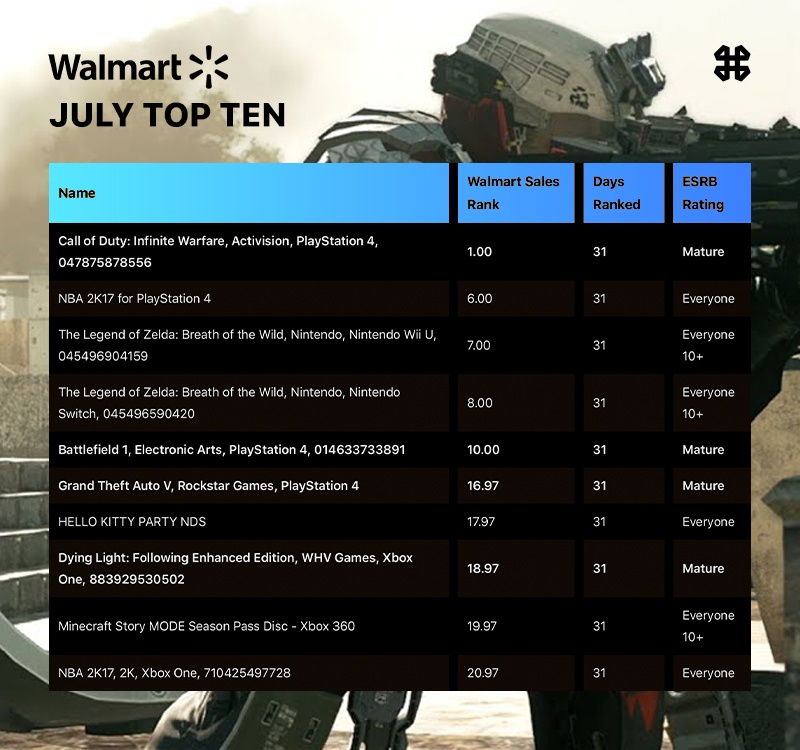