The ambitious, bold and hungry start their week with The Business of Business!
People
4.22.22   5:13 PM People

“It was really unfair”: A Nigerian ex-Fast engineer shares his experience of the early days at the defunct startup

Early product development at once promising one-click payments startup Fast was done by engineers in Nigeria. One of them told us what working for the company was like.

One-click payments company Fast recently shut down following a series of revelations that the Stripe-back startup was struggling to raise additional cash from investors after going on an expensive hiring spree despite generating paltry revenue.

But in its earliest days, when the company looked like it could become the next big thing in online payments, its brash CEO Domm Holland, who was reinventing himself in Silicon Valley after a failed startup in Australia, contracted experienced engineers in Nigeria to build a prototype for less cash than would be required to hire staff in California.

Before the cracks in Fast’s successful facade started to show, some of these engineers complained to NPR that they were underpaid for their work in comparison to what other U.S. tech companies paid for similar projects, and that they were not given proper credit for their work before being abruptly fired.

To see what lessons can be learned from Fast’s downfall, The Business of Business has taken a look at signs the company was starting to stumble as early as January. We’ve also heard what a number of U.S.-based workers had to say about their experience working at the once high-flying startup.

Now, we tracked down one of the early engineers in Nigeria, Wisdom Nwokocha. Nwokocha is an engineer with extensive experience in developing apps from the ground up, blockchain and technical writing. He worked for Fast for over half a year and helped build the first version of the company’s technology.

Nwokocha talked to us about his experience with the company and forwarded us some communications from Holland, which we have not altered except to hide personal contact information.

Here’s what Nwokocha had to say about how he got involved with Fast, what working with Holland was like and the red flags he noticed even in the earliest days of the company.

The Business of Business: How did you secure the Fast deal?

Wisdom Nwokocha: Okay, so I got the Fast deal when Domm reached out to me. I don't know how he got my email address, but he did and sent me an email in June 2019. We started off from there. I never applied for the position, and I think this is how he reached out to my team.

How many hours did you typically work in a week and how much did he offer to pay? 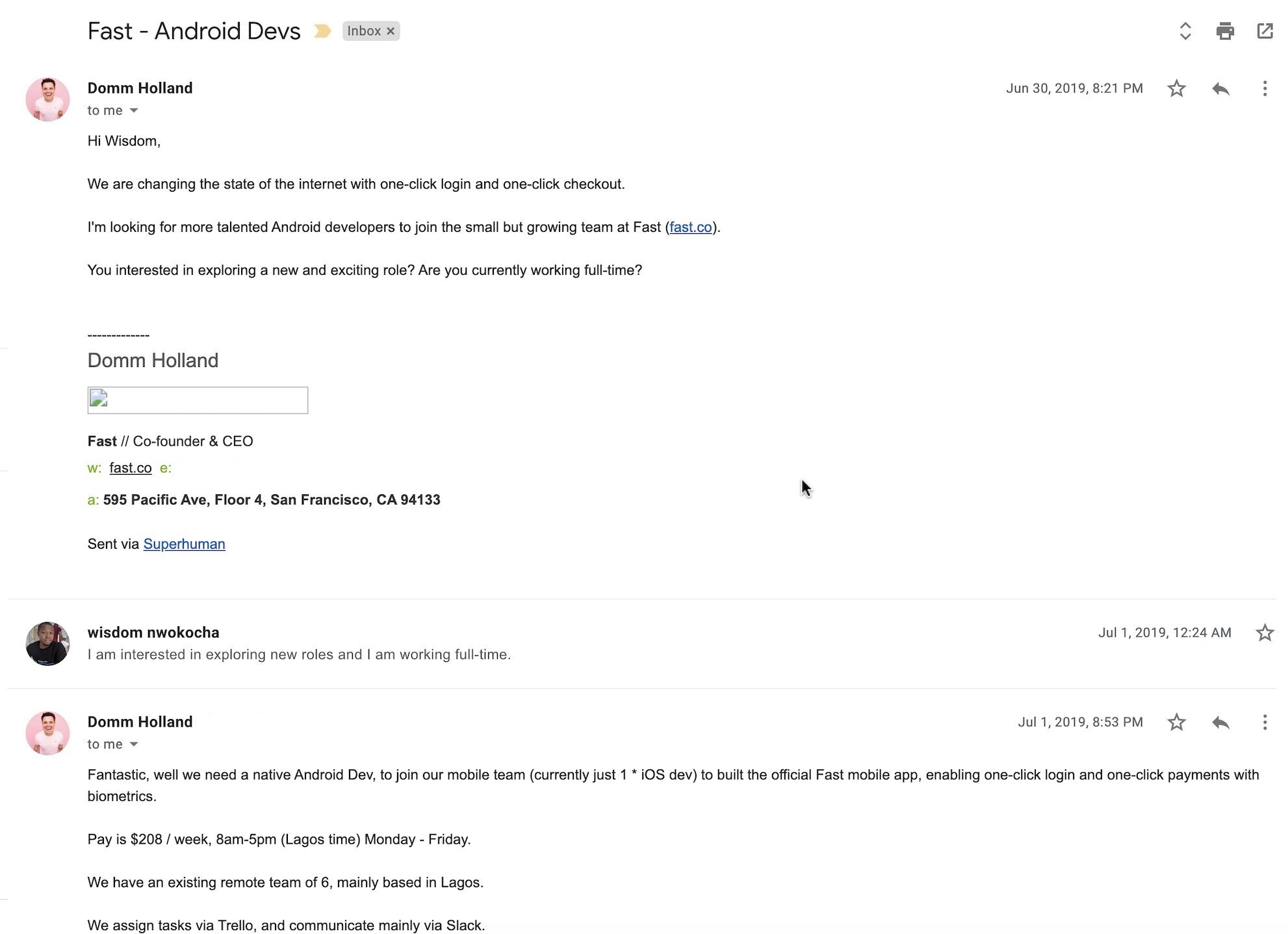 How long was your stay intended to last and how long did it work out?

Like I've said, I stayed 7 months working with Fast and it was intended to stay much longer than that because he said we will have to build version 1 and version 2 but we ended up building just version 1 when he fired all of us.

He told us we were the founding members and would be rewarded greatly as the company grew. But he took us out one by one, then got more funding and started to hire en masse from San Francisco. Getting fired like that was awful for me and the team— it was really unfair.

I didn't know it would be that way, but it is what it is. 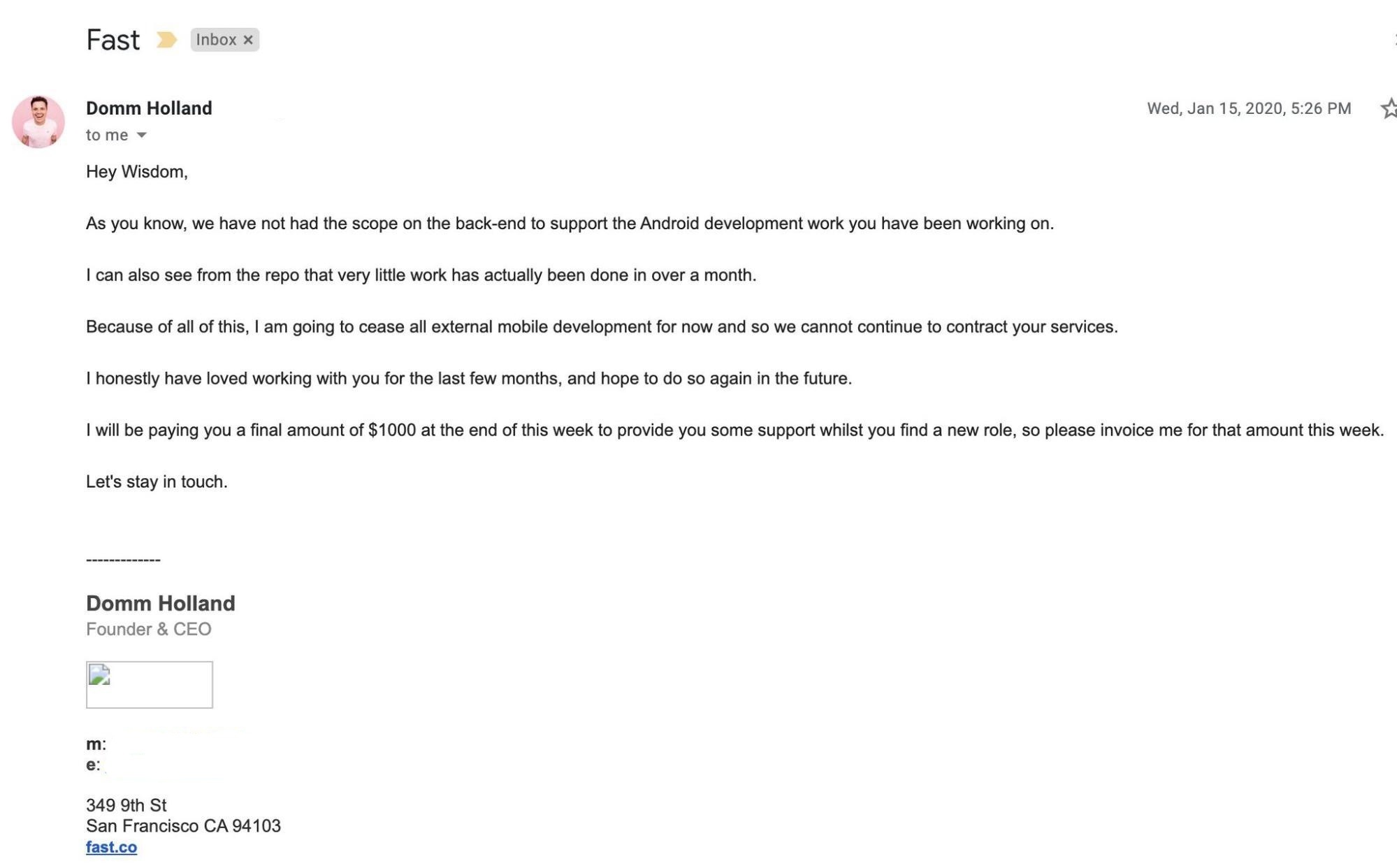 What prototypes were created by you and the other Nigerian developers for Fast?

I built the original android version completely— version 1 of Fast from start to finish, and it was perfect save for a few bugs we occasionally reviewed.

I also hosted an event for Fast here in Port Harcourt, in [southern] Nigeria.

My teammates worked on developing the website and several other parts of the projects.

Were there any red flags that you noticed at some point — at the start of the work or anytime at all?

Yeah, I noticed some red flags when he let go of his first co-founder and brought in another within a week or two, I think. So then I kind of felt something was wrong somewhere.

Towards November and December 2019 when he was letting my teammates go, I saw the red flags boldly and by January, I met the same fate. It seemed very abnormal to see my teammates just jump off like that and leave, it felt weird and I didn't feel very happy about it and I knew there was a problem somewhere. In a week, up to 3 people would leave. Other times, 2. It was very abnormal and I felt uncomfortable with it.

What was the working relationship between you, other Nigerian developers, and Domm typically like?

But the whole thing looks like a script designed to get the attention of the African market now that I think of it. Thinking about it, I feel like it was a well-designed ploy to introduce Fast to the African scene. I also think he wanted to prove to Silicon Valley that his prototypes were built by Africans so they would see that his company promoted diversity.

Did Domm agree to credit you for the work done by you and the Nigerian team?

Personally, there was no agreement on crediting me. I don't know about others, but I'll speak for myself. He posted my work on Twitter sometimes and mentioned me as the creator, but there wasn't an official agreement that gave me rights to my projects.

What do you think is the cause for the quietness when Domm sent everyone from Nigeria away in 2018?

I don't know the cause of the quietness, but I think it's because we're the kind of discreet people who don't like to escalate issues. Somehow, there are Nigerian companies that perpetuate worse to their staff, so we just thought to let it go. Some of my co-workers kept calling to not mention their names.

Everyone moved on to get better jobs— I got a job immediately after Fast— so we wanted the issue to die.

Did you notice any loopholes during your time of work that you can say had an effect on their closure?

There was an obvious loophole from the management. Domm would bring up an idea and kill it without a reason. He was giving us $50 gift cards when we worked very fast and hard, but as we started to put in really good work, he just ended that. He never gave a reason for ending it like, “Hey, this is the reason why I stopped this package.”

Managing resources was a problem for him because if you don't have enough to be consistent, why start it in the first place? When I read about the amount for maintenance and salary which is $10 million every month, I knew that a huge part of the problem came from the management.

Why would anyone have up to 300 employees and still request 200 more? It was a managerial issue.

What are your thoughts on Fast's demise?

Fast had an incredible foundational idea even if it is a mere feature in most of the competing companies. Currently, there is a company in Nigeria called 'Ourpass' that has the same idea as Fast but has added better features to build it. Domm's idea didn't meet up because what he had as a prototype, other companies had as a feature.

I feel like Fast's workers would go on to secure good deals, but I can't say the same for Domm who already has it bad in venture investment. I guess it's a closed deal for him seeing as he already has so many closed-down start-ups which ended badly.