The ambitious, bold and hungry start their week with The Business of Business!
People
6.22.18   3:06 PM People

The Big Apple leads The Emerald City, at least when it comes to hiring activity in the past year.

If you weren't already aware, the American technology industry is pretty healthy. Microsoft, Apple, Google, and Facebook are all hiring thousands of people each, not to mention hundreds of startups and other large companies in the tech, telecom, and internet industries. It should come as no surprise, then, that the top cities for job openings include Seattle, New York, and San Francisco.

But New York has had more job listings in the past year than Seattle or San Francisco? We tracked hiring activity across more than 400,000 companies that we track at Thinknum in order to come up with these raw numbers.

Here are the top-10 cities in terms of cumulative job listings in the past year:

The numbers above represent cumulative listings counted over the past year. That means, of course, that some listings were repeated multiple days until that person was either hired or the listing was simply removed. The "Avg. listings per day" shows the average number of listings in each city per day for the past year in order to better understand the recruitment rates across the various cities and average number of openings on any given day. 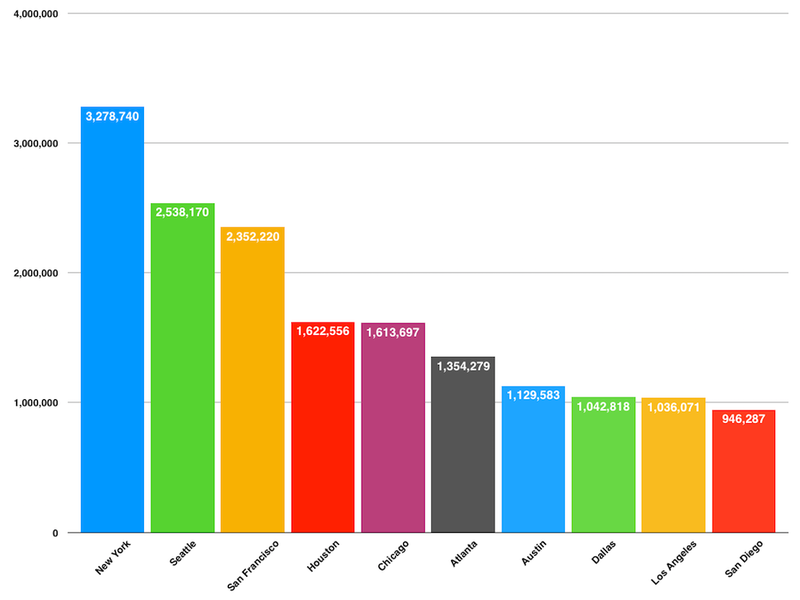 New York leads with an average of 8,983 listings per day. Home to some of the world's largest banks, telecom companies, and big pharma, it's not terribly surprising to see New York City as the most-active city when it comes to hiring.

Seattle comes in second, with an average 6,954 listings per day. Seattle isn't just the home of software giant Microsoft, but it's also where aerospace monster Boeing is headquartered. It also is home to Joint Base Lewis-McChord, a massive military base that employs around 56,000 people.

San Francisco comes in third with a daily average of 6,444 job openings. Comapnies like Wells Fargo, Salesforce, and tech upstarts like Uber employ thousands of employees in The City By The Bay.

So if you're looking to move, or if you're just curious where the healthiest job-hunting cities may lie, this list provides at least an estimation for the past year.