After it spent all of 2019 building and growing, hiring data suggests Netflix is taking a moment to re-calibrate its 2020 content strategy.

If you ask the execs at Netflix ($NFLX) what they think about as they fall asleep at night, chances are they will say only one thing happened in 2019: the competitive landscape changed radically as Disney entered the streaming space with Disney Plus. Meanwhile Apple showed up with deep pockets and HBO announced HBO Max with a diverse library of original content.

While still firmly in the lead when it comes to streaming, Netflix appears to be taking a moment to regroup and ponder a new strategy. Here's what we're seeing.

To review, last week we saw early signs of a pause at Netflix when job listing data showed that hiring activity dropped 20% going into December.

It appears — at least for now — that the hiring pause has hit its bottom. On December 19, job listings were at just 445 openings. Since then, though, Netflix has added a three job listings. While that doesn't sound like many, it signals a floor to the hiring slowdown.

But it also reveals what looks to be a slight shift away from the "acquire, buy, and create content" mantra that the company was focusing on in 2019.

Throughout most of 2019, jobs categorized as "Studio Finance" and "Content Legal" suggested that Netflix spent much of 2019 funding or acquiring the rights to new content. Indeed, as we've reported before, Netflix was adding an average of 30 new originals to its lineup per month, or one per day.

While there's no indication that Netflix Originals launches will slow any time soon, hiring for two new groups tagged as "Financial Planning & Analysis" for both Content and Corporate suggest that Netflix executives will be spending early 2020 looking at how all of these new content acquisitions are performing and making suggestions as to which shows and movies to keep — and cut.

One of the more recent openings "CSP&A" category (Content Strategy Planning & Analysis" category is seeking a Manager who will help direct future "Content Investment and Programming Strategy based on both internal and competitive insights". 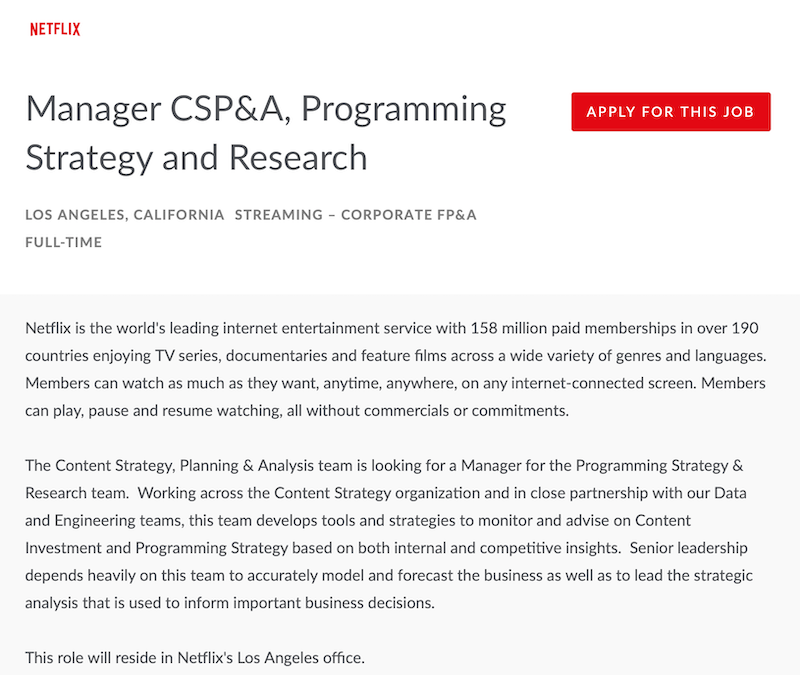 Indeed, job listings across the FP&A categories increased toward the end of 2019 as the company began planning its 2020 content strategy.

These new moves could all be year-end slowdowns in corporate activity combined with forward-thinking for 2020. But given the backdrop of major competitors entering Netflix's space paired with the hiring activity that we're seeing here, we'll be looking for Netflix to be making some big decisions in the coming few months as the FP&A groups bring their findings to Netflix's higher ups.