The ambitious, bold and hungry start their week with The Business of Business!
People
2.25.19   7:32 PM People

The NBA G-League may have found its platform, and it's a videogame streaming website

Cord cutters are shying away from ESPN. Facebook Live has its struggles as a livestreaming platform. What did the G League do? Turn to the videogame streaming website Twitch, and it seems to be a great match.

For years, NBA's G League, the minor leagues of basketball, was lost in the shuffle of NBA's massive television deals. But it may have found its niche on the web. No, it is not Facebook ($FB) Live, nor is it ESPN ($DIS).

It's actually roaring to popularity on Twitch.tv, a videogame streaming website owned by Amazon ($AMZN).

This year, the G League started Friday and Saturday Twitch streams from February 8 until March 23. On the first two weekends of G League play, the average stream had just over 8,300 viewers.

One major reason for a strong viewer count is due to co-streaming capabilities. Outside of the traditional broadcast, any streamer can add her or his own commentary to live games and stream it on their own channel, which not only gives those streamers live broadcast experience, but also allows the NBA to have increased exposure.

Another is a special overlay that is only on Twitch broadcasts. With a push of a button, viewers can see live stats and play a live fantasy sports game while watching their players perform. 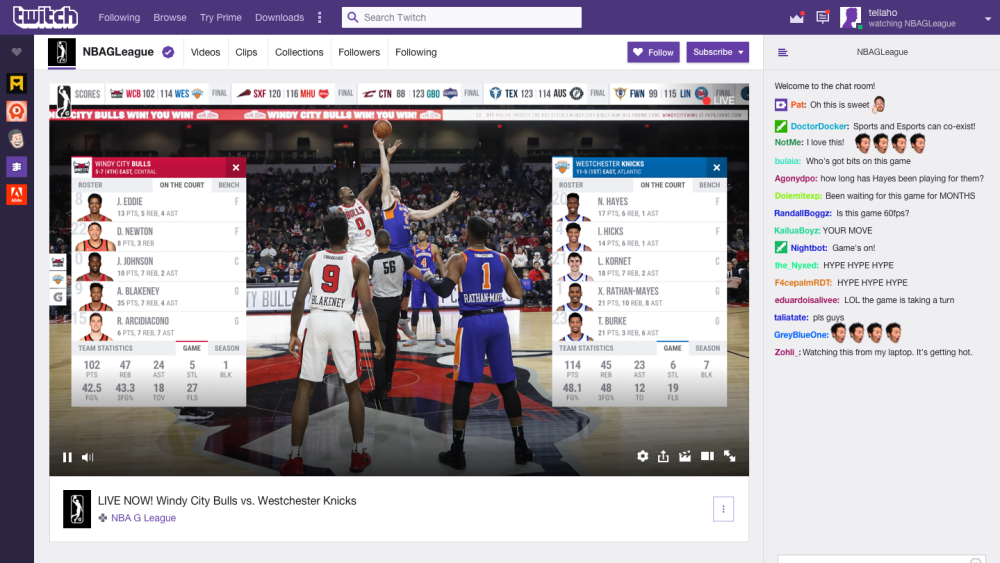 Compared to other streams on Twitch, the G League had the 31st-most concurrent viewers over the past weekend, beating out otherwise popular gambling streams, podcasts, and new videogame releases such as Path of Exile. It may not have the viewership of League of Legends and Fortnite — those games are pull hundreds of thousands of views while the G League only gets a couple thousand — but nevertheless, it ranks well among the pack.

It also had more views than both of the NBA's licensed videogames, which is a surprising phenomenon; on a website known for videogame streaming, minor league players actually playing basketball got more views than basketball videogames. During full hours with G League games — which took place between 1:00 a.m. and 5 a.m. GMT, or 8:00 p.m. to midnight EST — twice as many people were turning into developmental-league basketball games than NBA 2K ($TTWO) streams on Twitch.

(Note: the parameters for this comparison were limited to times that had live G League games. Times without an active stream for the G League were removed to show a direct comparison.)

Of course, G-League streams also dominated streams of NBA LIve 19, Electronic Arts ($EA) videogame that already pails in comparison when it comes to basketball videogame interest (as we covered before).

NBA continues to adapt ahead of the curve

Compared to the other "Big Four" sports leagues, the NBA has adapted more to a changing media and sports landscape by diving deeper into online broadcast channels and finding more ways to make people into fans.

Outside of expanding the game to China and Africa in the near future, the NBA established its own esports league in the NBA 2K League, allows online content creators to mingle with current superstars for viral videos, and ramped up its minor league, the NBA G League, to make it a more viable alternative to playing in the NCAA for a year. That allowed it to be ahead of the game compared to the MLB and NFL, who just started inking online broadcast deals with Twitter ($TWTR), Facebook, Amazon, and others.

As the biggest sports leagues in the world look to the future of media rights and broadcasting, the NBA might have found a platform that encourages active viewers with next-gen graphics. With basketball fans increasingly cutting the cord and with the failures of Facebook Live as seen with the MLB's deal, Amazon, through Twitch.tv, and the NBA looks to be a dynamic duo for the future of sports streaming.