The ambitious, bold and hungry start their week with The Business of Business!
Features
4.8.22   3:07 PM Features

Attention crooks: Here’s how money laundering is getting harder

We looked at the industries targeted by recent anti-money laundering measures that are making it more difficult to move shady money around the globe.

Hiding proceeds of crime can be a messy business. Your typical wealthy warlord or shady businessperson is likely to rely on an intricate network of shell companies and offshore jurisdictions to manage their cash. But it’s big business. As much as 5% of the global GDP is estimated to be laundered every year. However, governments are increasingly cracking down, narrowing the opportunities for even the most sophisticated criminals.

Several high-profile journalistic investigations into the inner workings of money laundering operations, most recently the Pandora Papers, have made it harder for governments to ignore the shadow financial system. As a result, asset markets traditionally associated with dirty money have been subject to increased scrutiny from financial regulators around the world over the last few years.

The fallout from Russia’s invasion of Ukraine is likely to continue to tighten the squeeze on those trying to conceal their ill-gotten gains. As governments slap sanctions on Russia’s economy, they are also eager to make it more difficult for its oligarchs to park their assets (especially yachts) in their jurisdiction. This will probably lead to stricter AML enforcement, aimed at Russian corruptioneers but doubtlessly affecting moneybags of all nationalities.

Here are the industries that might no longer be a good hiding place for shady cash in light of recent rule changes and crackdowns. 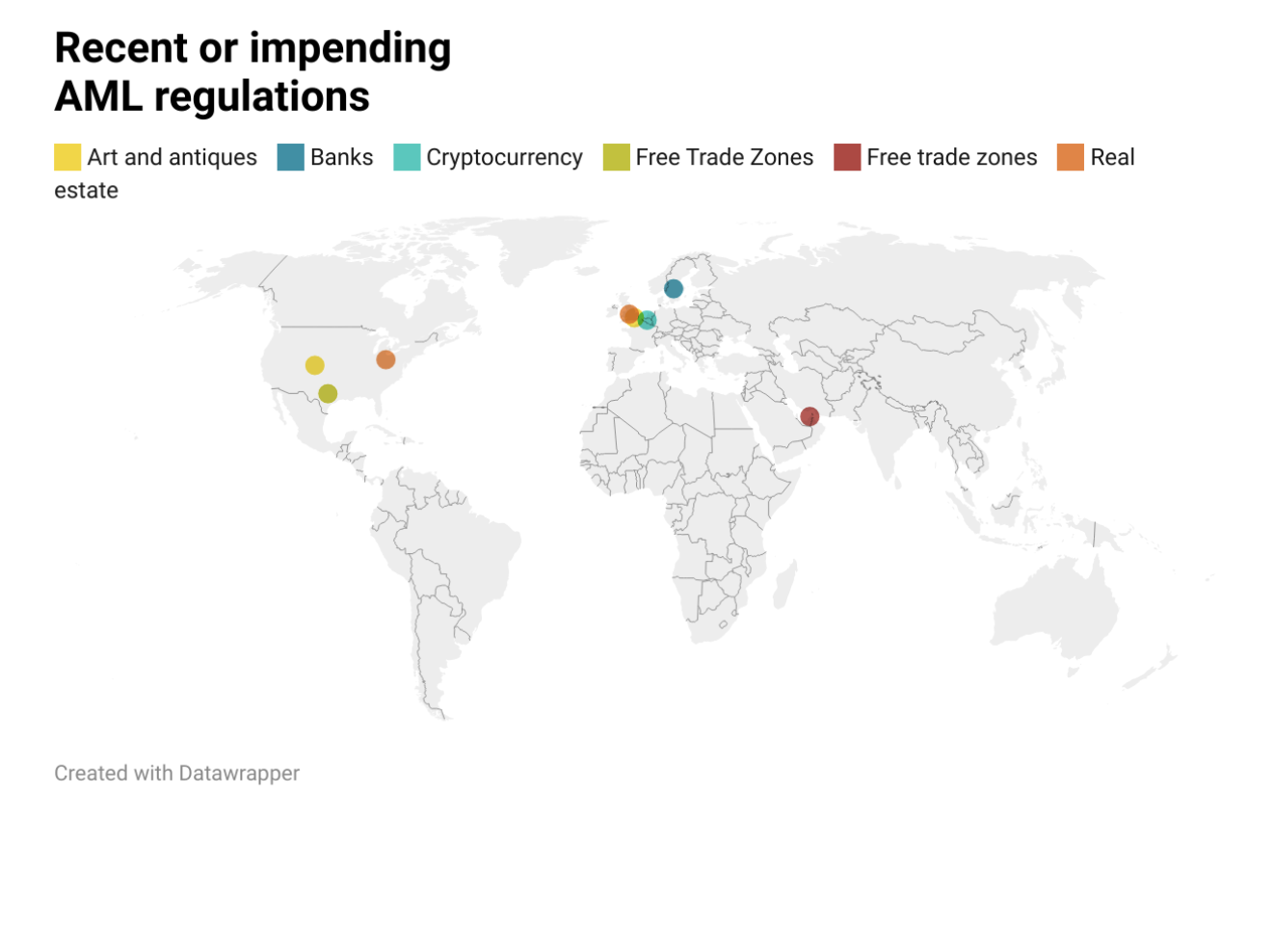 Purchasing real estate with cash is a tried and true money laundering technique used by the world’s kleptocratic elites. Those in need of a reliable way to store a million dollar bribe, tend to look no further than a penthouse in London’s Kensington Gardens or New York’s Soho. In 2015, the New York Times reported that over half of luxury real estate purchases in New York City were made through shell companies. In the UK, a total of £1.5 billion of property was purchased by Russians accused of corruption since 2016. But planned regulations in both countries will likely challenge the effectiveness of these schemes.

In the U.S, the Financial Crimes Enforcement Network, known as FinCEN, is considering a rule that would require real estate cash transactions to be scrutinized in a similar way as those involving loans from financial institutions. This will lead to new reporting requirements for businesses involved in cash-based real estate transactions. On the local level, state legislators in New York recently proposed a rule that would make it more difficult for shady real estate owners to mask their identity through limited liability companies. If the bill passes, LLCs would be required to disclose the names of anyone with an ownership stake in the company.

Meanwhile in the UK, Russia’s invasion of Ukraine has prompted swift action from parliament. The legislative body introduced a new law to create a registry of foreign entities that own property within the UK. If passed, the measure would make foreign ownership of UK real estate more transparent, making it more difficult for criminals to hide their money in London’s fashionable boroughs.

Cryptocurrency has long had a reputation as the asset of choice for criminals because it allows for anonymous transactions. Crypto is considered a relatively secure way to conduct online drug trade or collect a cybercrime ransom. Governments are well aware of this, however, and have gotten serious about cracking down on criminals using crypto.

To show that the government is focused on enforcement, The U.S Department of Justice recently created the National Cryptocurrency Enforcement Team, an entity that will work to squash crypto money laundering.

New laws should also aid it in going after crypto-based crime.The Anti Money Laundering Act, passed in the U.S in early 2021 extends existing AML requirements for financial institutions to digital currency transactions. Crypto exchanges are now required to collect and report information on transacting parties. FinCEN has proposed another rule that would impose similar requirements for transactions involving private crypto wallets. The EU has moved to propose its own legislation that closely mimics these regulations from across the pond.

The crypto industry, for its part, seems to be proactive in its cooperation with authorities. Eighteen crypto companies, including Coinbase and Fidelity Digital Assets are participating in the launch of the Travel Rule Universal Solution Technology (TRUST) platform. The initiative aims to bring crypto asset transfer services in compliance with the so-called “travel rule”, a requirement for financial institutions to collect and store certain information about transacting parties. The initiative will span multiple countries, including the U.S, Canada, Germany, and Singapore.

Nordic banks were once a popular destination for dirty money, as evidenced by the fact that several were revealed to have been part of a number of massive money laundering schemes involving their subsidiaries in the Baltics. According to bombshell revelations that surfaced in recent years, the alleged causes ranged from deficient “know-your-customer” practices to criminal collusion, leading to multiple investigations. Nordic banks were favored by Russian oligarchs and other bad actors, but following the humiliating revelations, they are now cleaning up their act.

Sweden piloted an anti-money laundering initiative in 2020 to facilitate information sharing between the biggest Nordic banks and the Swedish police. Its participants are the institutions involved in the money laundering schemes, among them Danske Bank and Nordea Bank. The pilot project has since become a regular collaboration, making the Nordic banking system a much more dangerous place for criminal cash.

The high brow crooks that prefer to store their cash in Picassos and Da Vincis are also facing trouble. Because these markets are often opaque and can have a limited paper trail, art and antiques has historically been a relatively easy place to send money through. But the U.S and a handful of other countries are looking to change that. .

A recent U.S. government budget broadens the definition of ‘financial institution’ to include those engaged in the trade of art and antiquities. This means that art and antiques dealers will be required to play a more active role in reporting suspicious activities to AML authorities and discerning true art lovers from crooks seeking to launder cash. This was modeled after a similar law in the UK, passed a few months earlier.

The lax trade and tax regimes within free trade zones are meant to encourage economic activity, but this can also make them a magnet for dirty money. In 2010, the Financial Action Task Force, an international NGO devoted to anti-money laundering reform, estimated that there were about 3000 free trade zones around the world.

The UAE in particular has long been the global hub for free trade zones, attracting foreign capital both legal and not so legal. The country is home to 45 free trade zones, which has made it a global business hub and helped it attract over 3,000 foreign companies. The hands-off approach has also earned the Emirates a reputation for being an offshore paradise and infused its financial, real estate, and precious metal sectors with illicit money. But that is slowly changing as the UAE takes steps to rid itself of the reputation as a haven for sketchy finance.

The UAE has ramped up prosecution of money-laundering cases, with 220 convictions between 2019 and 2021. Last year, its government announced the creation of a special court for money laundering crimes, as well as an executive office to deal with the issue. The Emirates is also planning to include gold sourcing regulations into its AML law. The country is currently planning to pass a new AML law that would give its central bank broad authority in rooting out money launderers out of its financial system.