You may be coveting the latest and hottest in smartphone tech... but that's not the way most Walmart customers shop.

You probably haven't even heard of the Samsung Galaxy Express S3. I certainly hadn't before writing this story, and I've been covering smartphones since before they were smart.

The S3 is usually sold in pre-paid format, meaning there are no contracts - instead, buyers pre-buy minutes and data via scratch-off cards and other methods. What's the appeal? It sells for less than $100 ($70.99 as of publication) and doesn’t require a credit check or a contract with a provider. It's not too shabby when it comes to tech, though: The S3 sports 8 gigs of onboard memory (expandable to 128HB via SD cards), a 4.5-inch AMOLED screen, two cameras, and a 1.3-gigahertz quad-core processor. 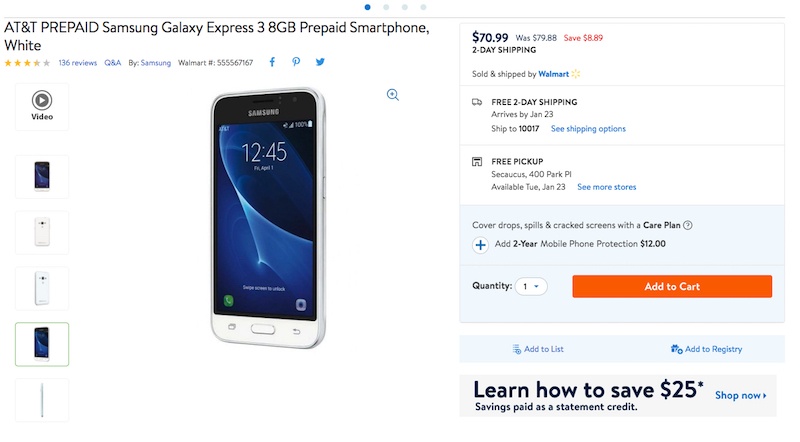 Those features may not be enough to entice those who need latest tech, but it's a cheap phone that gets the job done for under $100, and there are clearly a lot of customers who think that's just fine. So the next time you're asked what the best-selling phone is in the US, think twice before mentioning phones that people talk about.

Speaking of phones that no one's talking about, right behind the Galaxy S3 in Walmart's phone sales rankings is Apple’s iPhone 5S. Sure, people may be lining up for the iPhone X, but Apple continues to move tons of iPhone 5’s through the world’s largest retailer. Walmart lists it as available in-store only, and according to the Thinknum database, it sells for $149 and is pre-paid just like the Galaxy S3.

As for why these phones are selling like hot cakes (is that even still a cliche?), chances are it has a lot to do with the low price, lack of contract, and ready availability at the ubiquitous chain.