The ambitious, bold and hungry start their week with The Business of Business!
Features
11.4.21   9:07 PM Features

Parisa Fowles-Pazdro set out to create an “affordable” luxury dog brand in 2016. Business has doubled every year since.

Is your dog too discerning to settle for the run-of-the-mill kibble? Sweaters hanging on the racks at Petsmart and Petco looking too passé to match his spunk? Don’t worry, Maxbone has you covered.

Founder and CEO Parisa Fowles-Pazdro set out to create an “affordable” luxury dog brand in 2016. “I saw such a big gap in the market,” says Fowles-Pazdro, reflecting back to when she started shopping for her first pet dog, an English Bulldog named Macintosh. She roamed down the fluorescently lit aisles of traditional pet stores, and thought the design looked outdated and atmosphere depressing. “This is such an old school, archaic industry,” she said.

Fowles-Pazdro, like many dog owners, considers Macintosh a member of the family. But she felt like she was “shopping for a mouse or a lizard” when perusing “rubbish stuff,” as she puts it, selling in the big box pet stores or on websites, not for woman’s (or man’s) best friend. This lackluster experience was the motivation behind Maxbone.

“We're modernizing a really old school, arcane platform that only consists of men,” says Fowles-Pazdro. “There is no one else doing it with a fashion sensibility, a modern sensibility and in a practical way.” Maxbone items are indeed a slight indulgence—harnesses cost $45 to $55, jackets run $55 to $75, for example—but one-off purchases won’t typically break the bank. Even designer collaborations, like the vibrantly striped puffer coat with Kule costs $85, and a fluffy jumper with Christian Cowan costs $95.

Fowles-Pazdro, also creative director, started by designing, manufacturing and selling dog accessories through the website and posting on social media. She had some previous overlapping experience with design, sourcing and marketing through an apparel line, “for humans,” she clarifies, which she shuttered in 2015. “It was too high end, too expensive,” explains Fowles-Pazdro of the defunct line, called maxfowles. “Anyone who comes to me for advice on business, I say, no, don't do fashion, ever, ever!”

Maxbone quickly took off after launch. Fowles-Pazdro wasn’t sure there would be enough "fussy" customers like her, who like their home, clothing and dog accessories nicely designed. But there were. Of course it didn’t hurt that Kylie Jenner posted a photo of Norman, her Italian Greyhound posing in a Maxbone cable knit sweater on Instagram after a few months. After only six months, Disney approached Maxbone for a collaboration. “I literally thought the email was fake,” said Fowles-Pazdro. She finally answered it at her husband’s urging.

Maxbone was intended to be a direct to consumer brand, but when Neiman Marcus, then Saks, contacted her to carry Maxbone products, Fowles-Pazdro said yes, to help create brand awareness. Maxbone now also sells in Bloomingdales, among other department stores; there is one brick and mortar shop in lower Manhattan, which was previously closed due to water damage but has since reopened.

Beautifully designed leashes, hats, bowls, among other items, like the curly knit jumper, which celebrity rescue dog Mork has modeled, have been Maxbone’s primary identity as a brand, but from the start, Fowles-Pazdro wanted to create healthy dog food. Over two years she worked on formulating Maxbone’s food line behind the scenes and launched last year.

“When we launched the food, it was really scary,” says Fowles-Pazdro, “people see us as an accessory brand.” She wondered if customers would trust the freeze-dried food, quite pricey at $34 for a one-time purchase of a 16 oz bag—that features a clean minimalistic design and perfectly kerned typography. According to Fowles-Pazdro, the feedback has been positive, which is especially gratifying since it was the primary motivation behind Maxbone.

Fowles-Pazdro was not only horrified by many mainstream dog food brands’ ingredients, when she initially shopped for Macintosh, but also the dog-food-veterinary industrial complex. Mars Petcare, a division of the multinational food company Mars, owns brands like Iams, Pedigree and Royal Canin, among others, which experts like Rodney Habib, co-author of The Forever Dog, consider to be unhealthy because of ingredients and multiple health violations.

The Maxbone founder also feels strongly about pet adoption, and supports charities to help dogs get out of shelters and find loving homes.

“When you get into this world and you love dogs,” says Fowles-Pazdro, “you literally cry every day when you see the dogs that are in these kill shelters.” Fowles-Pazdro helps various dog charities by donating funds or Maxbone products for organizations to raffle off.

How did Fowles-Pazdro swiftly switch gears from high fashion luxury maven to (stylist) dog-centric entrepreneur? It could be related to having been an immigrant multiple times over, and the flexibility that goes along with that. 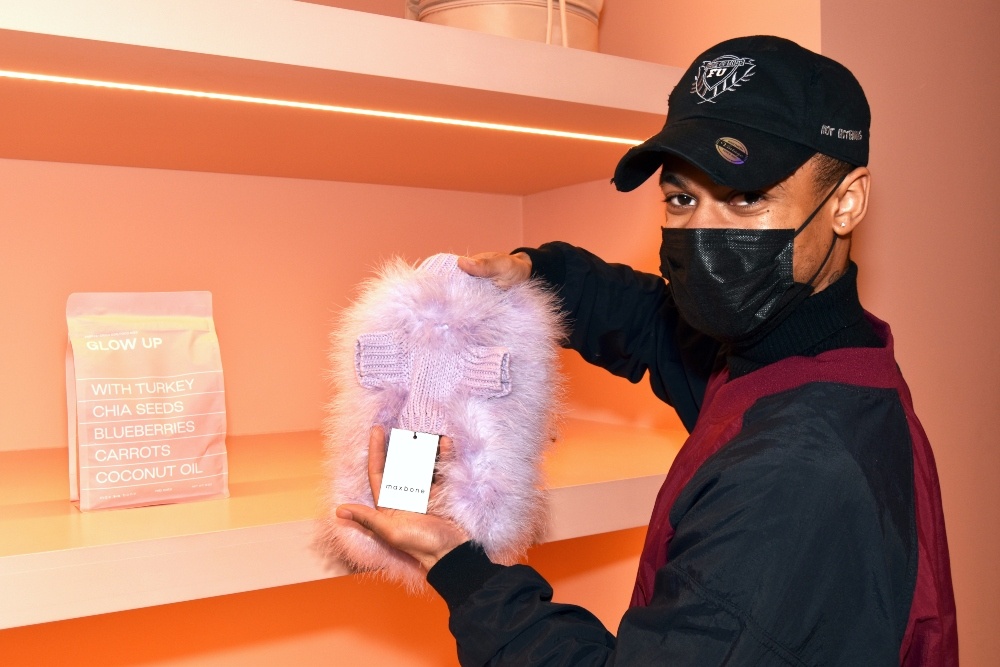 Fowles-Pazdro was born in Iran, when she was five, her family fled the country’s violence for Sweden in the 1980s, settling in the university town of Uppsala, just north of Stockholm; she remembers her neighbor’s house getting bombed before she left. Trained as a dentist in Sweden, Fowles-Pazdro wanted to pay off a condo she bought at age 19, so she moved to London to earn a higher salary. It’s where she met her now husband [literally, she was cleaning his teeth], real estate mover and shaker, Max Fowles-Pazdro. Her last move thus far, with her husband, was to Los Angeles, California, in late 2010.

“I sometimes feel a little bit rootless,” concedes Fowles-Pazdro of her multiple moves between countries, “But with that comes flexibility. I am not trapped somewhere.” She adds that she appreciates being adaptable. “You become more resilient, you become more adaptable.”

Fowles-Pazdro saw her parents go from highly educated professionals in cosmopolitan Tehran, to struggling in Sweden with a new culture, new language and having three kids. She’s been driven to succeed. “Seeing them lose everything,” says Fowles-Pazdro, “I was always like, I'm going to work very hard, I'm going to give them back the life they had.” Her mother always thought they would move back to Iran, which eventually became demoralizing over the years. “It’s very shocking to see your parents deteriorate slowly,” says Fowles-Pazdro.

Fowles-Pazdro and her husband immigrated to the U.S. during the financial crisis of 2008 from London, thinking the U.S. would rebound quicker than the U.K. “We were living on our savings,” she remembers, “we lost everything we had and it was so scary. We basically went from having a beautiful condo in Holland Park, having nice cars, to thinking about if we can buy our coffee or not.”

“I cried when we got our green cards,” laughs Fowles-Pazdro, “I was so happy.” Recalling the years-long, tedious, antiquated visa and green card immigration process they went through, “If someone wants to modernize a business, they should modernize that!” says Fowles-Pazdro.

Maxbone now has 11 employees, including a few part time workers, and has grown steadily at 100% per year (200% during the pandemic) and Fowles-Pazdro’s 2022 projections are $20 million. While Maxbone has received $4 million in VC funding from Victoria Grace’s Colle Capital and Hartz Capital, in 2019 to 2020, finding funding to scale Maxbone has been challenging. Fowles-Pazdro thinks it’s because many VCs prefer founders with an IIvy League education or experience at a tech giant like Amazon, neither of which she had.

"A few years ago, they didn't really understand,” says Fowles-Pazdro some investors’ understanding of Maxbone. "Now, they're understanding. It's nice to be the leader, to have done something that no one has thought about.”